George Stevenson Knowles then entered private practice in Wolverhampton in 1853, and he practiced there until 1860.

George Stevenson Knowles died suddenly in 1861 of typhoid at the home of his friend John Mason Galloway. He had been suffering from rheumatism, which had forced him to give up his practice in 1860, but his hopes were high that a move to the south of England would enable him to resume medicine.

George Stevenson Knowles’s Obituary is in The British Homeopathic Review, Volume 5 in 1861. 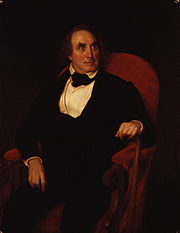 His father was the lexicographer 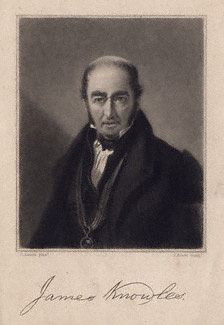 The family removed to London in 1793, and at the age of fourteen Knowles published a ballad entitled The Welsh Harper, which, set to music, was very popular.

The boy’s talents secured him the friendship of William Hazlitt, who introduced him to Charles Lamb and Samuel Taylor** **Coleridge.

He served for some time in the Wiltshire and afterwards in the Tower Hamlets militia, leaving the service to become pupil of Robert Willan (1757-1812). He obtained the degree of MD, and was appointed vaccinator to the Jennerian Society.

Although Robert Willan generously offered him a share in his practice, he decided to forsake medicine for the stage, making his first appearance as an actor probably at Bath, and playing Hamlet at the Crow Theatre, Dublin.

At Wexford he married, in October 1809, Maria Charteris, an actress from the Edinburgh Theatre. In 1810 he wrote Leo, in which Edmund Kean acted with great success; another play, Brian Boroihme, written for the Belfast Theatre in the next year, also drew crowded houses, but his earnings were so small that he was obliged to become assistant to his father at the Belfast Academical Institution.

In 1817 he removed from Belfast to Glasgow, where, besides conducting a flourishing school, he continued to write for the stage.

His first important success was Caius Gracchus, produced at Belfast in 1815; and his Virginius, written for Edmund Kean, was first performed in 1820 at Covent Garden. In William Tell (1825), Knowles wrote for William Charles MacReady one of his favorite parts.

His best known play, The Hunchback, was produced at Covent Garden in 1832, and Knowles won praise acting in the work as Master Walter. The Wife was brought out at the same theatre in 1833; and The Love Chase in 1837.

In his later years he forsook the stage for the pulpit, and as a Baptist preacher attracted large audiences at Exeter Hall and elsewhere. He published two polemical works: the Rock of Rome and the Idol Demolished by its own Priests in both of which he combated the special doctrines of the Roman Catholic Church.

Knowles was for some years in the receipt of an annual pension of £200, bestowed by Robert Peel. He died at Torquay on 30 November 1862.

A full list of the works of Knowles and of the various notices of him will be found in the Life (1872), privately printed by his son, Richard Brinsley Knowles, who was well known as a journalist.

Joseph Thomas Sheridan Le Fanu was an Irish writer of Gothic tales and mystery novels, was a follower of Emanuel Swedenborg, and he was the grand nephew of Richard Brinsley Sheridan, and a friend of Oscar Wilde’s mother.