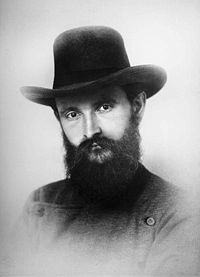 Robert Bosch was a patient of Heinrich Goehrum and a life long advocate and patron of homeopathy.

The Robert Bosch Stiftung GmbH Foundation in Stuttgart is now the home of the archive and library of the Liga Medicorum Homeopathica Internationalis, and it houses the private papers of the founder of homeopathy, Samuel Hahnemann.

Robert Bosch deserves a separate listing from other European corporate leaders and philanthropists due to his considerable interest in and support for homeopathy.

Bosch was founder of Robert Bosch GmbH, the large manufacturer of auto parts, appliances, and power tools in Germany. Besides creating quality products, the Bosch company has had a long history of providing a healthy work environment with good ventilation and lighting for its employees, and it was the first company in Europe to establish the eight hour workday (rather than ten or twelve hours).

Bosch grew up in southern Germany in an area that was previously called the Kingdom of Württemberg. Queen Olga of Wurttemberg (1822–1892), a Russian princess, married Charles I, who became the king of Wurttemberg. Queen Olga, most of the aristocracy, and even most of the surrounding rural population in this area became strong advocates for homeopathy in the late 1800s. Only the local univer sity remained resistant and closed its doors to teaching homeopathy or to having dialogue with homeopathic doctors.

Very committed to creating a homeopathic hospital, Bosch spent many decades and millions of German marks to make it a reality. The Robert Bosch Hospital was finally opened in 1940 in Stuttgart.

Bosch insisted that ‘homeopathy is preferable for internal illnesses’ and for chronic diseases, though he also asserted that any proven treatment should be a part of this hospital.

Bosch was indignant about the unjust way homeopathy was treated by conventional physicians, especially when they suggested that homeopathy was unproven or was superstition.

On his 80th birthday, Bosch was conferred an honorary doctorate of medicine by the medical faculty of the University of Tubingen. He was heartened to find that this medical school was finally beginning to appreciate homeopathic and natural medicine.

Today, the Robert Bosch Stiftung GmbH Foundation is one of the largest German charities associated with a private company. The Robert Bosch Stiftung GmbH Foundation funds projects involved in health and science, education and society, and international relations. Its Institute for the History of Medicine houses many of the original papers and ephemera of homeopathy’s founder, Samuel Hahnemann.

From http://en.wikipedia.org/wiki/Robert_Bosch Robert Bosch was born on September 23, 1861, in Albeck near Ulm, in southern Germany, as the eleventh of twelve children. His parents belonged to the upper class of farmers in the region. His father, a freemason, was unusually well educated for someone of his social status, and placed special importance on a good education for his children.

After his school and practical education, Bosch spent a further seven years working at diverse companies in Germany, the United States (for Thomas Alva Edison in New York), and the UK (for the German firm Siemens).

On November 15, 1886, he opened his own ‘Workshop for Precision Mechanics and Electrical Engineering’ in Stuttgart. A year later, he made a decisive improvement to an unpatented magneto ignition device made by the engine manufacturer Deutz, providing his first business success. The purpose of the device was to generate an electric spark to ignite the air/fuel mixture in a stationary engine.

In 1897, Bosch was the first to adapt a magneto to a vehicle engine. In doing so, he solved one of the greatest technical problems faced by the nascent automotive industry. The invention of the first commercially viable high voltage spark plug as part of a magneto based ignition system by Robert Bosch’s engineer Gottlob Honold in 1902 greatly enhanced the development of the internal combustion engine.

Before the 19th century ended, Bosch expanded his operations beyond Germany. The company established a sales office in the UK in 1898, and other European countries soon after. The first sales office and the first factory in the USA were opened in 1906 and 1910 respectively. By 1913, the company had branch operations in the Americas, Asia, Africa, and Australia, and was generating 88% of its sales outside Germany.

In rapid succession in the years following the First World War, Bosch launched innovations for the motor vehicle, including diesel fuel injection in 1927. In the 1920s the global economic crisis caused Bosch to begin a rigorous program of modernization and diversification in his company. In only a few years’ time, he succeeded in turning his company from a small automotive supplier into a multinational electronics group.

From the beginning, Bosch was greatly concerned about promoting occupational training. Prompted by his awareness of social responsibility, he was one of the first industrialists in Germany to introduce the eight hour work day, followed by other social benefits for his associates.

Robert Bosch did not wish to profit from the armaments contracts awarded to his company during WWI. Instead, he donated several million German marks to charitable causes. A hospital that he gave to the city of Stuttgart opened in 1940.

In the 1920s and 1930s, Robert Bosch was politically active. As a liberal businessman, he sat on a number of economic committees. He devoted a great deal of energy and money to the cause of bringing about reconciliation between Germany and France. He hoped this reconciliation would bring about lasting peace in Europe, and lead to the creation of a European economic area.

The National Socialist regime in Germany brought Bosch’s peacemaking efforts to an abrupt end. The company accepted armaments contracts, and employed forced laborers during the war. At the same time, Robert Bosch supported the resistance against Adolf Hitler: together with his closest associates, he saved people of Jewish descent and other victims of Nazi persecution from deportation.

Robert Bosch was keenly interested in agricultural issues, and owned a farm south of Munich. He was also a passionate hunter. When he died in 1942, he was survived by four children from two marriages. A son from his first marriage died in 1921 following a protracted illness.

In 1937, Robert Bosch had restructured his company as a private limited company (close corporation). He had established his last will and testament, in which he stipulated that the earnings of the company should be allocated to charitable causes. At the same time, his will sketched the outlines of the corporate constitution which was formulated by his successors in 1964 and is still valid today.

From 1869 to 1876, Robert Bosch attended the Realschule (secondary technical school) in Ulm, and then completed a three year apprenticeship as a precision mechanic.

It was during this apprenticeship that he was first introduced to electrical engineering, a discipline that was still in its infancy at the time, but which was to remain a constant source of fascination for him throughout his life.

Following his apprenticeship, Bosch spent seven years working for a range of companies in Germany, the U.S. (Thomas Alva Edison), and the UK (Siemens Brothers), where he was mostly involved in manufacturing electrical equipment.

Bosch also learned about bookkeeping from his elder brother Karl, who owned a gas and water installation company in Cologne. In addition, during the winter semester of 1883/84, he visited lectures at Stuttgart Polytechnic in order to overcome his “fear of technical terminology.” Here, he acquired a theoretical understanding of electrical engineering.

On November 15, 1886, Robert Bosch opened the “Workshop for Precision Mechanics and Electrical Engineering” in Stuttgart with one associate and one apprentice. His two associates were tasked with constructing and installing electrical equipment of all kinds, including telephone systems. He chose to start up in the state capital of Wurttemberg, in southwestern Germany, chiefly because of its close proximity to Oberturkheim (now a part of Stuttgart), where his fiancee Anna Kayser (1864-1949) lived.

Robert Bosch and Anna Kayser married in 1887, one year after Bosch founded his company. The couple had two daughters, Paula and Margarete, and a son, Robert. In 1887, the year of his marriage, Bosch manufactured his first magneto ignition device, which was based on a product made by the engine manufacturer Deutz.

Bosch significantly improved the design, and the resultant product provided the impetus that allowed his business to take off.