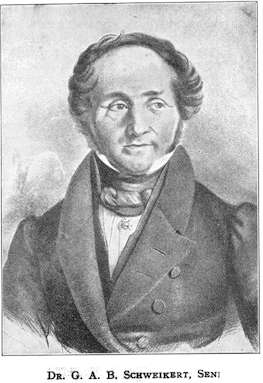 Georg August Benjamin Schweikert 1774 - 1845 was a German orthodox physician who converted to homeopathy to become the publisher of Newspaper The Homeopathic Science of Cure for Doctors and Lay Homeopaths, the President of the German Homeopathic Central Union of Homeopaths, and one of the founders of the Leipsig Homeopathic Hospital, and also of a homeopathic hospital in Moscow.

Schweikert  was especially enthusiastic regarding the project, and even volunteered to take charge of the new Leipsig Homeopathic Hospital without remuneration, and to remove from Grimma  to Leipsic  for the purpose.

Moritz Wilhelm Mueller was elected director of the hospital for the ensuing year, and with energy and with great influence he commenced to labor for its successful opening…

Samuel Hahnemann expressed his disapproval of this movement to some friends, and when the society elected Moritz Wilhelm Mueller as director instead of Schweikert…

(Moritz Wilhelm Mueller was educated at) the University of Wittenberg. It was there that he first met Schweikert, who became a Homeopathist through his influence…

In 1845, Schweikert was the homeopathic physician of a homeopathic hospital in Moscow funded by Prince Leonid Michailowitsch Golyzin,

Georg Schweikert was a Pastor’s son from Ankulum in Zerbst. He was intended for theology, but after attending Bartholomew’s School in Zerbst, and the Cathedral School in Magdeberg, and studying theology in Halle, after his father’s death, he transfered to Jenna to study medicine.

His uncle Loder was a famous Professor of Anatomy and Surgery, and he became Georg’s mentor, and Georg assisted him in his private practice.

In Jenna, Georg met Christoph Wilhelm von Hufeland and became a favoured student. Georg graduated in 1799 and began his private practice in Zerbst.

Widowed after 2 years of marriage, Georg moved to the University of Wittenberg on the recommendations of uncle Loder and Christoph Wilhelm von Hufeland, where he became a Lecturer in Obstetrics and began to write. He married again and was made a Magistrate in 1807.

In 1812-13, he became the Director of the French Military Hospital in Wittenberg, but he was far to outspoken about his German nationalism, and the French court martialled him and sentenced him to death. Two days before his scheduled execution, the Prussians captured Wittenberg and released him.

On his release, Georg moved to Grimma where he became Physician to the town. In 1820, he came across homeopathy, and began clinical trials into this new method. In 1824, he put himself under homeopathic treatment, and found this cured an old and persistent abdominal complaint.

He immediately sought out Samuel Hahnemann in Kothen and became his student and close friend from that time onwards.

Georg wrote subsequently that as an allopath, he had frequently found himself at a patient’s bedside with no idea what to do, but that as a homeopath, he could always do something, and now had many cases where homeopathy had been quite remarkable.

Julius Schweikert 1807 - 1876, son of Georg August Benjamin Schweikert, was also a student of of Samuel Hahnemann,

In 1845, Prince L M Golitsyn opened a homeopathic hospital with 10 (later 20) beds in Moscow. In charge was Dr. Julius Schweikert (1807-1876), who had previously (in 1832) been invited by Count Boris Kurakin to serve as his house physician…

during 14 years some 1000 persons were treated in the in patient unit, whilst some 3,000 patients sought consultation without being hospitalized. 148 of those hospitalized died (7,5%), whilst others recovered or significantly improved…

Carl Bojanus is on record criticising Julius Schwekert for practicing a hybrid homeopathy/allopathy, working as a regular physician at the Widow House (a charitable hospital in Moscow), resulting in … the closure of this hospital in 1860…