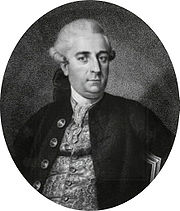 Joseph Freiherr von Quarin 1733 - 1814 was an Austrian orthodox physician who was the Senior Physician of the Brothers of Mercy Hospital in Leopoldstadt in Vienna, and Physician in Ordinary to Empress Maria Theresa, the wife of Francis I of Austria, and Emperor Joseph II.

Quarin was the teacher, mentor and friend of Samuel Hahnemann.

In 1754 Quarin became a university Professor at Vienna, where he was appointed Rector six times during his career. From 1784 to 1791, Quarin was general director of the Allgemeinen Krankenhauses. He also initiated the establishment of the Findelhaus (foundling hospital) in Vienna.

Quarin supported Samuel Hahnemann when the latter found himself in dire financial straits, and obtained for him a place of librarian to the Governor of Transylvania, Samuel von Brukenthal, in Hermannstadt.

’I had his friendship. I could almost say his love; I was the only one at that time whom he allowed to accomapny him to his private patients. He singled me out, loved and taught me as if I had been one of his first pupils in Vienna, or more than that, and all this without ever being able to expect remuneration from me.’