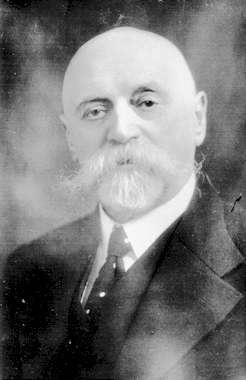 Nicholas Gabrilovich 1865 - 1941 was a Russian orthodox physician who converted to homeopathy to become a member of the St. Petersburg Society of Homeopathic Physicians, Vice President of the Liga Medicorum Homoeopathica Internationalis in the 1930s.

Gabrilovich was a colleague of L. Brazol, V. Ripke, A. Rogachevsky, G. Sidorenko and pharmacists B. Borel, D. Leont’ev, K. Solov’ev, A. Stsitnik, I. Stempleling and P. Shchedrin and many others.

In 1908-09, observing that homeopathy in Russia was not going to disappear as was predicted by regular medicine in the 19th century, but, on the contrary, the number of homeopathic societies and pharmacies had been growing, the medical administration attempted to fight this phenomenon in another way.

It was decided to attack the economic basis of the homeopathic system, i.e., homeopathic pharmacies. In fact, the first official storm clouds appeared in the Russian homeopathic sky at the very beginning of the century, in the late 1890s, approximately in 1897, when a special committee for reviewing the Medical and Pharmaceutical Regulations was established at the Medical Council.

Most probably, they were also planning some changes in the manner of the sale of homeopathic medicines in pharmacies. It is known that Dr. Anatoly Flemming and pharmacist E. Focht were required to provide the committee with their recommendations.

Further, another committee to deal exclusively with homeopathic pharmaceutical affairs, was established in 1904. Apparently, the war with Japan and the shock of the First Russian revolution postponed its conclusions.

In 1909, the appropriate moment came.

At the last […] meeting of the Medical Council, the deliberation on the report submitted by the special committee on the project of New Pharmaceutical Regulations […] continued. The discussion of the section dealing with the rules of selling homeopathic medicines was brought to a close.

The reaction of homeopathic societies and periodicals may be defined as panic. Never before had allopaths dared to express so openly their desire to destroy homeopathy.

Their motivation was the following: The Medical Council has recognized that homeopathy does not represent a well founded science even in its technical aspects. No special training of pharmacists is needed to prepare homeopathic medicines. […]. Free sale of homeopathic medicines, even considering that there is no harm for health because of the minimal quantity of drastic substances contained in them, nevertheless brings harm to public health by offering useless medical support.

Many homeopathic pharmacies are owned by homeopathic physicians […]. This, in absence of a certain tariff for homeopathic medicines, creates a situation which violating the law and medical ethics.

As for customers, the sale of homeopathic medicines in normal pharmacies would inevitably lead to the cheapening of this kind of medicines […].

It goes without saying that if this decision would have been approved by the Duma, homeopaths would have remained without properly and qualitatively prepared homeopathic medicines. But the most important point is that the financial basis enabling the existence of many homeopathic societies would have been destroyed completely. This was a real threat.

On December 29, 1909, the chairman of the St. Petersburg Society of Homeopathic Physicians, Dr. Lev Brazol, called a meeting of St. Petersburg’s homeopathic physicians and pharmacists in order to work out counter proposals.

On the next day, December 30, this committee held its first session. Pharmacist Leont’ev proposed a project which was accepted with amendments by Borel, Rogachevsky and Brazol.

The project and amendments made previously as well as at this meeting, were approved unanimously. On January 15, Dr. Brazol passed “The project of the rules of the sale of homeopathic medicines” to whom also “The reasonable remarks” and the memorandum were attached, to the chairman of the Medical Council G. Rein and the Chief Medical Inspector L. Malinovsky.

It seems that the memorandum had no influence. Although it was explaned to the Medical Council by lawers that closing homeopathic pharmacies contradicts the right of private property and cannot be performed in any way, high ranking allopaths merely changed the tactics.

They declared that homeopathic pharmacies should obey in their day to day activity not to some special law but to “instructions” of the Minister of Interior.

The Committee of the Ministers, with exception of the Minister of Trade and Industry who objected against the project, decided on July 12, 1911 that no amendments are to be introduced into the project supposed to put homeopathic pharmacies under “instructions”.

Hence, the regulation by the law of selling homeopathic medicines should be thus replaced with the instructions proposed by allopaths…

The lay supporters of homeopathy did not keep silent either. Vladimir Petrovich Meshchersky, an honorary member of the St. Petersburg Society of the Followers of Homeopathy, dedicated to the project an editorial in the conservative periodical “Grazhdanin” (The Citizen) issued by himself…

The last bulwark before the virtual abolishment of homeopathy was the State Duma which should have discussed this proposal. Homeopaths called upon the wide public and to their foreign colleagues and to supporters in the Duma in order to stop the threat…

As a result of the reports delivered at the Meeting, the Committee of the State Duma dealing with a project of the new Pharmaceutical Regulations, turned to the Ministry of Interior requiring to provide with the project.

It goes without saying that allopaths, who had expected to solve the “problem” of delivering homeopathic medicines within the frameworks of their mother Ministry of Interior, were not glad with that intervention…

In any case, homeopathic pharmacies continued to exist until the Bolshevik revolution, and they prepared and sold medicines uninterruptedly.

Evgeny Gabrilovich - 1918, father of Nicholas Gabrilovich, was also a homeopath and a member of the St. Petersburg Society of Homeopathic Physicians,