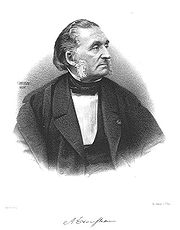 Armand Trousseau 1801 -  1867 was a French internist. His contributions to medicine include Trousseau sign of malignancy, Trousseau sign of latent tetany, Trousseau Lallemand bodies (an archaic synonym for Bence Jones cylinders), and the truism, “use new drugs quickly, while they still work.”

Armand Trousseau was ’no friend to homeopathy, but too wise and too honest a man to refuse to learn from his opponents‘.

In 1834, Trousseau commented that homeopaths were ‘”Honorable men, friends in whose good faith we have confidence” even though they practice a system which is “speculative” and “against scientific principles”‘.

Homeopaths responded that they were confident in the great Trousseau, with his candour and love of science, to fully investigate the doctrines of homeopathy.

In 1829, Christian Theodore Herrmann, the great nephew of Samuel Hahnemann, and the homeopathic physician of Tsar Nicholas I, conducted State clinical trials on homeopathy across Europe, approximately 50,000 patients were involved in these studies.

As a consequence, in 1834, Trousseau began experimenting with placebo (Expériences homéopathiques tentées à l’Hôtel-Dieu de Paris. Journal des Connaissances Médico-Chirurgicales 8:238–241), a technique previously unknown to allopathic medicine who did not conduct any clinical trials into their medications until the homeopaths began to conduct such research in response to the attacks of their opponents, but the use of placebo was a recommended technique initiated by Samuel Hahnemann.

Indeed, the homeopathic origin of the use of placebo in clinical trials has often been lost in the desire to attack homeopathy and deliberately misunderstand its role within homeopathy.

In 1836, Trousseau vigously attacked the ‘habits of skeptisicm’, and he ’laments how far medicine has strayed from the spirit of its origins’, commenting:

“In early times, medicine was an art, which took its place at the side of poetry and painting; today they try to make a science of it, placing it beside mathematics, astronomy, and physics.” [Armand Trousseau, Lectures on Clinical Medicine (vol 2), The New Sydenham Society, 1869)

Trousseau  recounts the story of Rhus Tox, and the work of Dufresnoy, a physician at Valenciennes who noted its curative similimum action in 1798, and he took up the suggestions of homeopaths and experimented with strychnine (the active ingredient of Nux Vomica and Ignatia) with some success, as recounted by Pierre Jousset in his Practice of Medicine.

Trousseau also followed the recommendation of homeopathy when he experimented with the prophylactic use of belladonna in the prevention of scarlet fever, which he found most efficatious, as reported by Alphone Teste in his Homeopathic Materia Medica.

On the recommendations of homeopaths, Trousseau also experimented with arsenicum (which he was not impressed with) though he adopted Samuel Hahnemann’s advice to determine the effects of arsenicum on healthy subjects before using it on the sick, specifically commending homeopaths and allopaths for conducting provings of medicinal substances as recommended by Samuel Hahnemann, stating that the proving of drugs upon persons in health as the only safe and reliable method of determining their therapeutic uses.

Trousseau also experimented with ipecac (which he was impressed with), and he came to understand the importance of the morbific modificator, commenting ‘… what physician, what naturalist, would be so stupid as to attach nothing but a secondary value to the specific characters which here play such as important part?’

Trousseau’s Theory of Substitution, he admitted was based upon the homeopathic Law of Cure, and he tacitly accepts and occasionally used the Law of Similarity (using instead the term Substituenda Substituendis), and he incorporated it into his teachings. Trousseau even adopted Samuel Hahnemann’s Doctrine of Affinity, and Samuel Hahnemann’s classification system for his own materia medica, admitting openly that the allopathic methods previously in use contained inherent defects.

Indeed Trousseau often agreed with Samuel Hahnemann on general principles, and in his later years, Trousseau’s views on the use of iron gave succour to the principles of homeopathy, as Jean Paul Tessier noted in his Lectures on clinical medicine, delivered in the Hospital Saint-Jacques, of Paris, _and Trousseau returns the favour by making honorable mention in his lectures of Jean Paul Tessier’s _Recherches sur la Diathèse Purulente‘.

Homeopaths Carroll Dunham and Andrew R Wright travelled from American to attend the lectures of Trousseau and Jean Paul Tessier.

Indeed, Alphone Teste in his Homeopathy, a Principle in Nature, expresses his surprise that Trousseau never became a homeopath, bearing in mind his almost complete adoption of the theories and principles of homeopathic philosophy.

“Despite his style Galenic materialism, Armand Trousseau’s definition of diathesis is very close and could be taken even as the definition of miasma ‘congenital or acquired predisposition but obviously essential and multiple chronic conditions, but only occurs in essence’.

A native of Tours, Armand Trousseau began his medical studies in his native town as a pupil of Pierre Fidele Bretonneau at the local general hospital.

He later continued his studies in Paris, where he received his doctorate in 1825 and became adjunct faculty in 1827. In 1828, the French government assigned him to investigate epidemics ravaging some parts of southern France.

After completing his mission the same year, Trousseau travelled to Gibraltar as a member of a commission to investigate yellow fever. This work, and a monograph on laryngeal phthisis, led to his early recognition in Paris.

In 1830 Trousseau became Médecin des hôpitaux through concours, and in 1832 received a position in public health with the central bureau while working as a physician in the Hôtel-Dieu under Joseph Claude Anthelme Recamier.

In 1837 he received the great prize of the academy. In 1839 he was appointed physician at the Hôpital St. Antoine and eventually became Chair of therapy and pharmacology at the Paris medical faculty.

In 1850 he assumed the Chair of clinical medicine and again commenced working in the Hôtel-Dieu. He was also active in politics, particularly after the French Revolution of 1848, holding several positions including being a member of the legislative body.

During his later years Trousseau developed gastric cancer. Ironically, he previously described Trousseau sign of malignancy and developed a similar finding in himself. This cancer limited his activities and eventually proved fatal.