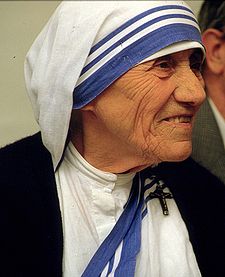 Mother Teresa 1910 – 1997 (Photo: Túrelio on Wikimedia-Commons, CC-BY-SA) born Agnese Gonxhe Bojaxhiu was an Albanian Roman Catholic nun with Indian citizenship who founded the Missionaries of Charity in Calcutta, India in 1950.

Mother Teresa has just been given sainthood status by Pope Francis on 15.3.16 http://edition.cnn.com/2016/03/15/europe/pope-mother-teresa-becomes-saint-september-4/index.html

For over 45 years she ministered to the poor, sick, orphaned, and dying, while guiding the Missionaries of Charity’s expansion, first throughout India and then in other countries.

Mother Thersa won the Nobel Peace Prize in 1979 and India’s highest civilian honour, the Bharat Ratna, in 1980 for her humanitarian work. Following her death she was beatified by Pope John Paul II and given the title Blessed Teresa of Calcutta.

Dr. (Sister) M Gomes, a physician who has worked at the Mother’s Mission in Calcutta since 1945, notes that one of the obstacles to the spread of homeopathy in the Mother’s work is inadequate funding for homeopathic hospitals. At present, several Sisters are studying homeopathy at a homeopathic medical college in order to improve the care they can offer poor people.

She was the youngest of the children of a family from Shkoder, Albania, born to Nikolle and Drana Bojaxhiu. Her father was involved in Albanian politics. In 1919, after a political meeting, which left Skopje out of Albania, he fell ill and died when Agnes was about eight years old.

After her father’s death, her mother raised her as a Roman Catholic. According to a biography by Joan Graff Clucas, in her early years Agnes was fascinated by stories of the lives of missionaries and their service, and by age 12 was convinced that she should commit herself to a religious life. She left home at age 18 to join the Sisters of Loreto as a missionary. She never again saw her mother or sister.

Agnes initially went to the Loreto Abbey in Rathfarnham, Ireland, to learn English, the language the Sisters of Loreto used to teach school children in India. She arrived in India in 1929, and began her novitiate in Darjeeling, near the Himalayan mountains. She took her first religious vows as a nun on May 24, 1931. At that time she chose the name Teresa after Therese de Lisieux, the patron saint of missionaries. She took her solemn vows on May 14, 1937, while serving as a teacher at the Loreto convent school in eastern Calcutta.

Although Teresa enjoyed teaching at the school, she was increasingly disturbed by the poverty surrounding her in Calcutta. A famine in 1943 brought misery and death to the city; and the outbreak of Hindu/Muslim violence in August 1946 plunged the city into despair and horror. On September 10, 1946, Teresa experienced what she later described as “the call within the call” while traveling to the Loreto convent in Darjeeling from Calcutta for her annual retreat. “I was to leave the convent and help the poor while living among them. It was an order. To fail would have been to break the faith.”

She began her missionary work with the poor in 1948, replacing her traditional Loreto habit with a simple white cotton sari decorated with a blue border, adopted Indian citizenship, and ventured out into the slums. Initially she started a school in Motijhil; soon she started tending to the needs of the destitute and starving. Her efforts quickly caught the attention of Indian officials, including the Prime Minister, who expressed his appreciation.

Teresa wrote in her diary that her first year was fraught with difficulties. She had no income and had to resort to begging for food and supplies. Teresa experienced doubt, loneliness and the temptation to return to the comfort of convent life during these early months.

Teresa received Vatican permission on October 7, 1950 to start the diocesan congregation that would become the Missionaries of Charity. Its mission was to care for, in her own words, “the hungry, the naked, the homeless, the crippled, the blind, the lepers, all those people who feel unwanted, unloved, uncared for throughout society, people that have become a burden to the society and are shunned by everyone.”

It began as a small order with 13 members in Calcutta; today it has more than 4,000 nuns running orphanages, AIDS hospices, and charity centers worldwide, and caring for refugees, the blind, disabled, aged, alcoholics, the poor and homeless, and victims of floods, epidemics, and famine.

In 1952 Mother Teresa opened the first Home for the Dying in space made available by the City of Calcutta. With the help of Indian officials she converted an abandoned Hindu temple into the Kalighat Home for the Dying, a free hospice for the poor. She renamed it Kalighat, the Home of the Pure Heart (Nirmal Hriday). Those brought to the home received medical attention and were afforded the opportunity to die with dignity, according to the rituals of their faith; Muslims were read the Quran, Hindus received water from the Ganges, and Catholics received the Last Rites. “A beautiful death,” she said, “is for people who lived like animals to die like angels - loved and wanted.”

As the Missionaries of Charity took in increasing numbers of lost children, Mother Teresa felt the need to create a home for them. In 1955 she opened the Nirmala Shishu Bhavan, the Children’s Home of the Immaculate Heart, as a haven for orphans and homeless youth.

The order soon began to attract both recruits and charitable donations, and by the 1960s had opened hospices, orphanages, and leper houses all over India. Mother Teresa then expanded the order throughout the globe. Its first house outside India opened in Venezuela in 1965 with five sisters. Others followed in Rome, Tanzania, and Austria in 1968; during the 1970s the order opened houses and foundations in dozens of countries in Asia, Africa, Europe, and the United States…

When Eastern Europe experienced increased openness in the late 1980s, she expanded her efforts to Communist countries that had previously rejected the Missionaries of Charity, embarking on dozens of projects. She was undeterred by criticism about her firm stand against abortion and divorce stating, “No matter who says what, you should accept it with a smile and do your own work.”

Mother Teresa traveled to assist and minister to the hungry in Ethiopia, radiation victims at Chernobyl, and earthquake victims in Armenia. In 1991, Mother Teresa returned for the first time to her homeland and opened a Missionaries of Charity Brothers home in Tirana, Albania.

By 1996, she was operating 517 missions in more than 100 countries. Over the years, Mother Teresa’s Missionaries of Charity grew from twelve to thousands serving the “poorest of the poor” in 450 centers around the world. The first Missionaries of Charity home in the United States was established in the South Bronx, New York; by 1984 the order operated 19 establishments throughout the country…

Mother Teresa suffered a heart attack in Rome in 1983, while visiting Pope John Paul II. After a second attack in 1989, she received an artificial pacemaker. In 1991, after a battle with pneumonia while in Mexico, she suffered further heart problems. She offered to resign her position as head of the Missionaries of Charity. But the nuns of the order, in a secret ballot, voted for her to stay. Mother Teresa agreed to continue her work as head of the order.

In April 1996, Mother Teresa fell and broke her collar bone. In August she suffered from malaria and failure of the left heart ventricle. She had heart surgery, but it was clear that her health was declining…

At the time of her death, Mother Teresa’s Missionaries of Charity had over 4,000 sisters, an associated brotherhood of 300 members, and over 100,000 lay volunteers, operating 610 missions in 123 countries. These included hospices and homes for people with HIV/AIDS, leprosy and tuberculosis, soup kitchens, children’s and family counseling programs, personal helpers, orphanages, and schools.