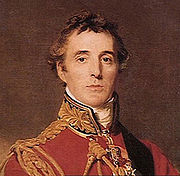 Arthur Wellesley 1st Duke of Wellington, KG, KP, GCB, GCH, PC, FRS 1769 – 1852 was an Anglo Irish soldier and statesman, and one of the leading military and political figures of the nineteenth century.

Arthur Wellesley was born in Ireland to a prominent Ascendancy family, he was commissioned an ensign in the British Army in 1787. Serving in Ireland as aide de camp to two successive Lords Lieutenant of Ireland he was also elected as a Member of Parliament in the Irish House of Commons. A colonel by 1796, Wellesley saw action in the Netherlands and later India where he fought in the Fourth Anglo-Mysore War at the Battle of Seringapatam. He was later appointed governor of Seringapatam and Mysore.

Wellesley rose to prominence as a general during the Peninsular campaign of the Napoleonic Wars, and was promoted to the rank of field marshal after leading the allied forces to victory against the French at the Battle of Vitoria in 1813. Following Napoleon Bonaparte’s exile in 1814, he served as the ambassador to France and was granted a Dukedom.

During the Hundred Days in 1815, he commanded the allied army which defeated Napoleon Bonaparte at the Battle of Waterloo.

An opponent of parliamentary reform, he was given the epithet the “Iron Duke” because of the iron shutters he had fixed to his windows to stop the pro-reform mob from breaking them.

He was twice Prime Minister under the Tory party and oversaw the passage of the Catholic Relief Act 1829. He was Prime Minister from 1828–30 and served briefly in 1834. He was unable to prevent the passage of the Reform Act of 1832 and continued as one of the leading figures in the House of Lords until his retirement. He remained Commander in Chief of the British Army until his death in 1852.

The Times wrote an article wishing the homeopaths success in these homeopathic trials, but they also made a pithy comment that the allopaths would probably rather see all the cattle die than have homeopathy proved successfull.