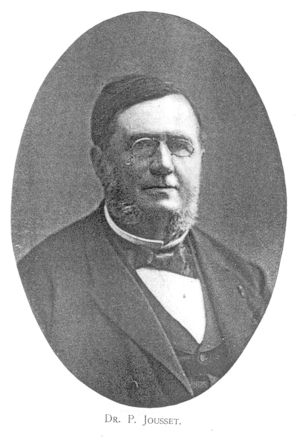 Pierre Jousset 1818 - 1910 MD was a French orthodox physician who converted to homeopathy, to become one of the founders and President of La Societe Francaise de Homeopathie in 1889, founder, Medical Director and Physician at the Hospital St. Jaques in Paris, Editor of L’Art médical with Jean Paul Tessier, and President of the Homeopathic Congress.

Pierre Jousset was the homeopathic practitioner of Jean Baptiste Henri Lacordaire, and he was a student of Jean Paul Tessier,

Jousset gives the filtered tuberculous bouillon of Denys successfully in the 6th, 10th, and 12th decimal. As soon as a reaction appears, he prefers to suspend the injections entirely rather than continue with weaker doses.

In another article, collaborated with G Proust (_L’Art médical_, Nov. 1907), Jousset’s opinion, from an experience with more than forty phthisical patients, was that the bouillon of Denys, with a careful technique, is entirely inoffensive, and that its beneficial influence is shown by the constitutional condition, the febrile movement, and even by the condition of the pulmonary lesion.

Jousset remarks that, in this treatment, the cure is assured when the injections of pure filtered bouillon do not produce an increase in temperature. In such case, and then only, we must discontinue the treatment.

Long before the discovery of Insulin Pierre Jousset of Paris prepared a pancreatic juice on a glycerine basis which he administered to diabetic patients in doses of 10 or 20 drops a day in water and had results sufficiently good to consider pancreatic juice, orally administered, as a remedy of great value in diabetes.

Jousset was born at Nantes in Brittany,

… the French Catholic physician Pierre Jousset, protesting in 1889 against what he saw as the new religion of evolutionary naturalism: ”Anti Christian science has perhaps never been more dangerous than at this moment. Rich in positive knowledge, it has become proud and authoritarian. The intolerance it blames on the Catholic Church has become its supreme law. It imposes its theories as dogmas, its hypotheses as incontestable truths; the dreams of imagination become articles of faith - science is infallible!”

Jousset’s Obituary is in The Critique, the Transactions of the … Session of the American Institute of Homœopathy, the Bulletin général de thérapeutique médicale, Le Propagateur de l’homoeopathie,

Henri Jousset, son of Pierre Jousset, was also a homeopath, Physician at the Hospital St. Jacques,

Marc Jousset, son of Pierre jousset was also a homeopath, and a Physician at the Hospital de Paris, the Hospital de l’enfant Jesus, and the hospital St. Jaques, and he was a member of the La Societe Francaise de Homeopathie,and and Secretary of the Homeopathic Congress.

Abbe Paul Jousset was a Professor of Geography and History at Nantes,