Antonio Negro 1908 - 2010 MD was an Italian orthodox physician who converted to homeopathy.

Antonio Negro was the homeopathic physician of Pope Paul VI, who awarded him the 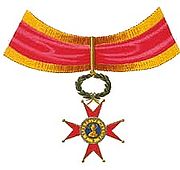 Order of St. Gregory for his work in homeopathy.

Antonio Negro was a colleague of Proceso Sanchez Ortega,

In June 2014 in Rome, the Museum of Homeopathy was inaugurated and sponsored by the Foundation Negro ‘… The Museum of Homeopathy- Italian historical Archive, was born from a project of prof. Antonio Negro (1908 – 2010), founder of the Italian Academy of Homeopathy and __LUIMO, leader of modern Italian Homeopathy. Most of the development of Italian Homeopathy is due to him. The Museum is in Piazza Navona 49 in Rome, taking place where the Accademia Italiana di Medicina Omeopatica (AIMO) ha organized and developed its activity for 50 years, from 1953 to 2003... (See https://www.facebook.com/events/473503862728368/?ref=3&ref_newsfeed_story_type=regular)…’

From an email from Francesco Negro, MD and Paolo Negro, MD on 10th July 2014 - and with grateful thanks for the photographs supplied here with this fascinating biography: ‘… ANTONIO NEGRO 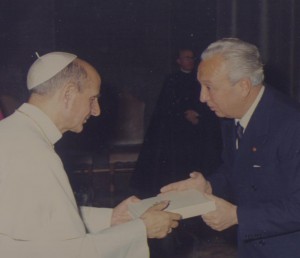 … Antonio Negro was born in Alassio,in the western cost of Liguria, on June 17th 1908. He received his education in the Salesian Institute, founded by Saint Giovanni Bosco. Completed his classical studies, he began his study of Medicine at  University of Genua, following advise from his family doctor Dante Bisceglia; homoeopath, that studied in the Hahnemann Medical College of Philadelphia under the wing of Costantine Hering, the founder of the American homeopathy (… I was only twelve when I heard the word “homeopathy” for the first time). Attending classes of important doctors like Maragliano, Remotti and Tusini he met  Nicola Pende. In that time he was founding the Italian modern endocrinology. That meeting was vital for his education and clinical orientation. He begun his apprentice and will follow him in Rome at Sapienza University as associate from 1935 to 1950. In Rome, working in the military hospital of Celio, during the War, he did not forget homeopathy although he was also active in the academic and hospital life with his master. 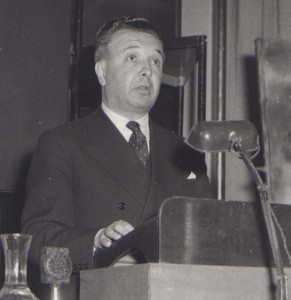 Indeed he increased his study and tested therapeutic results helped by endocrinology and orthogenesis studies (he will teach it at university) and constitutionalism by Pende. He joined the Roman Homeopathy Centre with other doctors (like Cigliano, Chinaglia, Galeazzi Lisi and the Tosi Brothers). Thanks to them Italian homeopathy was saved by the downfall started in the end of ‘800 till I world wide war. He will soon become director of the Centre and felt the urgent need to change it. His house will host some young doctors and students starving to homeopathy studies. On July 1947 he funded the Centro Ippocratico Hahnemanniano Italiano (C.I.H.I.), with some colleagues (Baratta, Pavignano, Santini and Sardoni) and other supporters (De Leva, Lucenti, Pantaleo, Ristori). (“…homeopathy’s spread in our country will depend on this Italian scientific and homeopathic organization; although it’s time to be alined to the level spread reached by other countries). It’s the beginning of Italian homeopathy and he will spend his entire life to develop it. The C.I.H.I. based in G. Belli street will be supported by Associazione Omeopatica Italiana (A.O.I.), homeopathic library and homeopathic Practice for needy people. In 1947C.I.H.I. launched homeopathic classes. First classes took place into the Noble Chemical and Pharmaceutical College. Two year later it will move in the new address in via G. Cesare. In 1949 the Istituto Omeopatico Italiano (I.M.O.) is founded based in Rome and Milan. Negro will be supported by Count Giancarlo Dal Verme, great fan of homeopathy. Pharmaceutical industry will show its interest on homeopathy because of I.M.O. During the Fifties Antonio Negro built relations with international schools: the Leon Vannier French one and the Swiss school of  Pierre Schmidt. In 1953 founded the Accademia Italiana  di Medicina Italiana Hahnemanniana (A.I.M.O.) 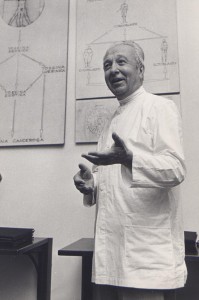 . Classes, currently carried on even now, were launched by Pende in the new address of Navona Square. The academy became soon a landmark for homeopathic Italian doctors. New partnership were built (Catena, Croce, Fontana, Leoni, Mosso).Homeopathic medical review was launched and became the official academy tool. Scientific activities and homeopathic developing were carried on. Organization of many national meetings increased Institutional interests of  Presidents of Italian Republic, Sandro Pertini, Francesco Cossiga and Oscar Scalfaro to Negro’s activities. National Institute of Health will nominate him as homeopathic medical commission  “representative”. In the Seventies two more adventures: in Rome in 1972 he founded the Società IAmbulatori di Medicina Omeopatica (S.A.M.O.); new students will join the team, and also his son Francesco Eugenio which later will lead on. In the same year he founded also a series of books of homeopathic medicine (Fratelli Palombi editors).  In 1970 in Naples Antonio Negro, reorganized the Neapolitan homeopathic medicine, helped by Alma Rodriguez, doctor and drug chemist. He will follow this project for almost twenty years. He founded the Centro di Medicina Omeopatica Napoletana (Ce.M.O.N.) dedicated to Tommaso Cigliano. In 1976 founded the Libera Università Internazionale di Medicina Omeopatica (L.U.I.M.O.) supported by Thomas Paschero (Buenos Aires), Proceso Ortega (City of Mexico) and Rodriguez; creating a wide cooperation with the main South American homeopathic schools. In the same year will chair the Liga Medicorum Homeopathica Internationalis till he get nominated as member in 1988. In 1991 regardless his advanced age, Antonio Negro started a new project in Rome. He founded  the Scuola Italiana di Medicina Omeopatica Hahnemanniana (S.I.M.O.H.) supported by few students and Maria Letizia Salvi. He will manage it till the end of his life. He also founded the homoeopathic Library dedicated to Evelino Leonardi, the homeopathic Center dedicated to Ferdinando Meconi and the Biopathology and Orthogenesis Center of Research dedicated to Nicola Pende 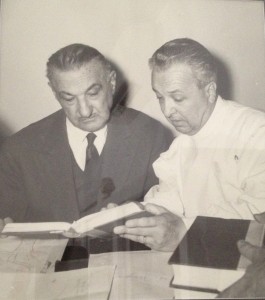 ._ He promoted a series of books named “Similia similibus curentur” and in 2006 established the “S. Hahnemann” award. His last foundation was the Museo dell’ Omeopatia  located in Navona Square, already set in motion  in 2006. The museum is sponsored by italian cultural assets department. In 2007 Italian homeopathic biography is published and in 2008, in the occasion of his 100 birthday, Antonio Negro gave his medical  archive and his private homeopathic collection to the museum (www.fondazionenegro.it). Antonio Negro died in Rome on march 25th 2010. Everybody agreed that the father of italian homeopathy left emptiness and also his humanity and passion for leading on his profession. Being a person of great spirituality he had the reward of Popes Pius XII, Paul VI, Benedict XIV. Diocese of Rome gave him the Good Samaritan award. In the funeral sermon archbishop Vincenzo Paglia remembered him like a “ God’s friend, men’s doctor ”…’_

From http://www.omeopatiasimoh.net/The Italian School of Hahnemannian Homeopathic Medicine (S.I.M.O.H Homeopathic Medical Organization and Educational Society) was founded (1947) through the initiative and work of Prof. Antonio Negro, the President and Director of Medical Scientific Activity, and a former student of Prof. Nicola Pende (endocrinology, biotipology, italian constitutional medical school) and Assistant for twenty years at the Institute of Special Medical Pathology and Clinical Methodology of the Faculty of Medicine and Surgery at the University of Rome “La Sapienza.”

Thanks to his scientific research, his teaching experience and his clinical therapeutic work of many years, Prof. Antonio Negro is considered the founder of the School of Homeopathic Medicine in Italy and the promoter of the most significant international links for this scientific discipline.

http://www.luimo.org/news.php?id=NE000171 ’… *June the 17th, 6 to 8 pm, at  Piazza Navona 49 – Roma, opening of the first Italian Museum of Homeopathy. The Museum of Homeopathy- Italia historical Archive, was born from a project of Professor Antonio Negro **{::}(1908 – 2010), founder of the Italian Academy of Homeopathy and LUIMO, leader of modern Italian Homeopathy. Most of the development of Italian Homeopathy is due to him. The Museum is in Piazza Navona 49 in Rome, taking place where the Accademia  Italiana di Medicina Omeopatica (AIMO) ha organized and developed its activity for 50 years, from 1953 to 2003. The **Homeopathy Museum is unique in Italy. In Europe, the only other homeopathy museum is located in Stuttgart in Germany at the Bosch Trust Institute for the History of Medicine, where the Samuel Hahnemann manuscripts are conserved. The** Italian Homeopathy Museum** maintain documents of great historical interest.  Many private archives form important homeopaths (Archivio Pompilj, Archivio Tosi, Archivio Galatzer, Archivio Negro) as well as other homeopaths of the XIX and XX centuries.  That’s why the museum has been promoted by the Italian Ministry of Cultural Heritage. Many other archives, will be soon enrich the Museum. The** Museum library** includes a rich collection of Homeopathy writings in many languages (Italian, German, French, English, Spanish). Of special interest the section of ancient Italian editions, including first editions printed during the XIX century and classified in the A.Negro-F.E.Negro: Bibliografia Omeopatica Italiana, Franco Angeli Ed. Roma,2007. The Museum conserves the world largest collection (over 200 ) of homeopathic medicines Kits or Trousses, as well as other Memorabilia and documents concerning Homeopathy during the period spanning the XIX and XX centuries. The Museum **will promote expositions, meetings, seminars, scientific and didactic publications as a reference point for Homeopathy in Italy and Europe. The **Museum **entry will be free and open to the researchers consultation. At the occasion of the museum Inauguration the Italian Mail** will print a commemorative stamp. Please contact prof. Francesco Negro if you want to plan a visit (info@fondazionenegro-archiviostorico.it)…‘*