John Martin Honigberger 1794 - 1869 MD was a Romanian orthodox physician who converted to homeopathy, and who introduced homeopathy into Afganistan, Egypt, Persia, Romania, Russia, Turkey, India and Pakistan (where he was known as Gholab Singh).

In 1835, Honigberger visited Samuel Hahnemann, and he was a speaker of the Romanian language and had practised homoeopathy in all three Romanian principiates.

Honigberger also discovered ancient Buddhist scrolls at Gandhara, and recorded some Sikh history whilst travelling for the East India Company.

Honigberger also recorded a natural Materia Medica of the plants he discovered whilst travelling, and he also established a medical vocabulary in four European and five Eastern languages.

Honigberger was known was known for own his careful personal discipline and for his humane and hygienic treatment of his patients,

How homeopathy came to India by Shubhadarshini Singh 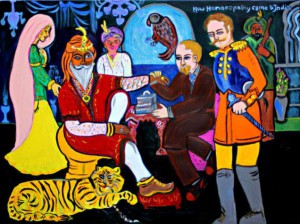 Dr. Honigberger was born at Krostadt, a town in Transylvania in Rumania. After passing his M.D. with distinction, he became a successful practitioner. Dr. Honigberger arrived at Lahore in 1829-30 and was later invited to treat the Maharaja Ranjit Singh of Punjab (Honigberger treated the Maharaja for paralysis of the vocal cords with swelling of the feet, dispensing Dulcamara in wine, in low potency, which cured him. The Maharaja was also impressed when Honigberger cured his favourate horse of ulcer of the leg).

Later he stayed on in Lahore even after the death of Maharaja Ranjit Singh. He wrote a book about his experiences, titled Thirty Five Years in the East.

He came from his native country, Transylvania through Levant, Egypt, Arabia and Persia and then on to India. He resided for about 15 years in the Punjab and returned via Afghanistan, Bokharo and Russia.

He left his native town in 1815 for Constantinople. Later in 1817 he visited Jerusalem and as a physician to the Governor of Toccata he traveled with him to Asia Minor. His first patient at Lahore was the adopted son of General Allard.

His fame spread only when he treated and cured some soldiers who had been bitten by a mad jackal and were beginning to show signs of hydrophobia, after some soldiers had already died of the bite. Maharaja Ranjit Singh was impressed by him when he treated his favorite horse of its bad ulcers of the leg. The Maharaja had come to have great confidence in him and made him accept the management of a gunpowder manufactory and also a gun stock establishment.

Being homesick, Honigberger went back in 1834. Next year he went to Paris and met Samuel Hahnemann and his wife. Later on the advice of Samuel Hahnemann, he bought a large quantity of homeopathic medicine from Samuel Hahnemann’s Pharmacist, Lehmann of Kothen.

In the year 1836, he happened to go to Vienna and caught an infection of cholera, which was raging there. He saved himself by taking Ipecac every half an hour. He was impressed greatly by the results of homeopathic medicine both in himself and others.

He decided to start his practice at Constantinople. He treated cases of Plague with Ignatia. He was led to use it because he saw Armenians there wearing a string tied to a bean of Ignatia and it seemed to give them protection where so many people were dying every day. He also treated a case of haemorrhage with Aranea diadema, which brought him both name and fame.

He had a very lucrative practice. On learning that Maharaja Ranjit Singh wanted him back, he reached Lahore in 1839 in the company of General Venture after an adventurous journey.

After the death of the Maharaja his position and influence waned till Sardar Jawahar Singh came to power, and restored him to his former position as Court Physician and Director of the gunpowder mill.

In 1849, the Punjab was annexed by Sir Henry Lawrence. With the abolition of the Sikh Darbar he had to relinquish his post. He was granted a pension. Later he returned to his country. It is not known when he died, but his life was full of adventure and pioneering. He was the first man to introduce the name of Samuel Hahnemann and his healing art to India.