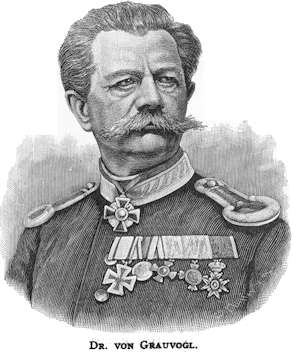 Eduard Von Grauvogl 1811 - 1877 MD was a German orthodox physician who converted to homeopathy, to become the first homeopath in Finland, and the President of the Central Union of Homeopathic Physicians in Germany.

Grauvogl was also a colleague of Bohler, Hummel, Kirsch, Viet Meyer, Clotar Mueller, Schneider, Veisch, and many others. 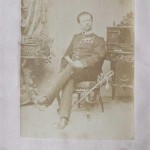 http://www.scribd.com/doc/39844591/Hidden-Roots-of-Homeopathy-in-Europe Robert Jutte, The Hidden Roots of homeopathy in Northern, Central and Eastern Europe, (Institut Fur Geschichte Medizin, Institute for the History of Medicineof the Robert Bosch Foundation, 2006). Grauvogl accepted the invitation in November 1871, under the condition that he could bring a reliable pharmacist with him, a wish he was granted. Grauvogl described the resistance he was faced with in a letter that he wrote a few years later to a Russian physician.

Grauvogl’s lectures, to which no medical students but only qualified doctors were admitted, were also attended by two high ranking military physicians and by the head of the medical faculty of the university and a general practitioner. Only the two military physicians remained faithful to him.

Tsar Alexander II had even given orders to reserve two sickrooms in the Helsinki military hospital for Grauvogl, where he could treat his patients exclusively homeopathically. Grauvogl also operated a successful private practice which attracted patients from as far away as St. Petersburg.

But it was not long before Grauvogl complained about intrigues from his opponents, among them the head of the health department who was said to be hostile towards homeopathy.

Count Nikolay Vladimirovich Adlerberg, the Governor General in Finland, which was then a province of the Russian Empire, offered Dr. Grauvogl to settle in Helsingfors in order to deliver lectures on homeopathy at the university and to homeopathically treat in a local military hospital….

Homeopathic treatment in two rooms of the hospital had continued for some 7 months and was interrupted by a sudden illness of the Patron, Count Nikolay Vladimirovich Adlerberg. Grauvogl was personally entrusted by Tsar Alexander II with the treatment of Count Nikolay Vladimirovich Adlerberg and had to leave the hospital. During the period of 7 months, 81 patients were treated. 52 recovered, 10 were passed to the allopathic unit and 14 remained receiving treatment.

Eduard Von Grauvogl explained: Homeopathic treatment (at the Helsingfors Military Hospital) had continued from January 1, to July 25, 1872, whilst my private practice became large and stretched to St. Petersburg.

The rooms intended for homeopathic treatment, were filling slowly, as especially difficult, mostly incurable, cases were chosen (to be hospitalized in these rooms). No acute cases were put in my rooms, except for those who proved to be in dangerous conditions.

This behavior seemed to me abusive; nevertheless, all my complaints and requests […] remained unanswered. Nothing resulted not only from my complaints, but also from the orders of Count Nikolay Vladimirovich Adlerberg, as the Chief Physician of Helsingfors, an ardent enemy of homeopathy, did all as he wished. Only in Russia is it possible that one behaves contrary to the will of Tsar Alexander II and the persons empowered by him.

Grauvogl also complained on the enmity of the doctors subordinated to him - in his opinion, they deliberately misdiagnosed their patients in order to represent their diseases for future statistics as much milder than they were in reality.

Other complaints of Dr. Grauvogl were the following: