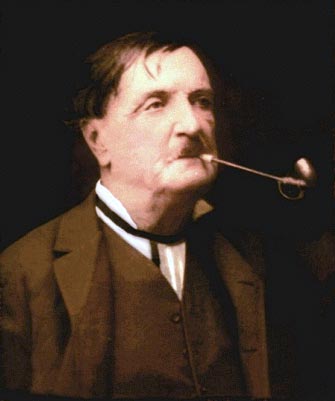 Count Cesare Mattei 1809 - 1896 was an Italian Aristocrat and lay practitioner, who developed a form of therapy called Electro Homoepathy, which is widely enjoyed today as Spagyric medicine.

Cesare Mattei was a friend and the homeopathic practitioner of Pope Pius IX, who made him a Count in honour of his achievements, and he also appointed him Treasurer of Bologne,

Electro Homoepathy is not related to homeopathy at all, and at the time, homeopaths were quite upset that these remedies were distributed by the Geneva Electro Homeopathic Institute headed by the pharmacist Albert Sauter (1846-1896), a former collaborator and representative of Mattei.

Nonetheless, these remedies were widely distributed throughout Europe, though true homeopathic pharmacies refused to stock them, and many homeopaths wrote articles condeming them.

Such tactics never work with the public, even when homeopaths try them!

Cesare Mattei was a friend of William Thomas Stead,

Theodore Krauss established a pharmacy of Electro Homeopathy in Germany, and this method then became known as the Spagyric method of Krauss. Today, Theodore Krauss’s Spagyric remedies continue to be sold, and practitioners still study this method, and though historians, Spagyric practitioners and the public often confuse these two methods, Electro Homoepathy is completely unrelated to homeopathy, and still widely enjoyed today as Spagyric medicine.

Electro Homoepathy is the name given to a new system of medicine discovered by a famous Italian scientist Count Cesare Mattei in the later part of the 1800’s.

Count Mattei, the founder of Electro Homoeopathy, was born on the 11th January in the year of 1809 in Bologna City in Italy. He belongs to one of the noblest families of learned town of Bologna.

After having studied natural science, he gave himself up to anatomy, physiology and pathology. Then more exclusively to chemistry and botany, after long and patients research following a method of his own, he discovered how to extract from certain plants the active principles which, alone or combine, form the agent in the new materia medica.

Numerous and prolonged experiments upon the animal economy, experiments made first of all upon the dogs, have demonstrated the curative power of his remedies upon the organism, and at the same time have proved that they can never produce the slightest morbid alteration either in the organs or their functions.

He believed in the famous Paracelsus who introduced law of similar. Thus convinced simultaneously of their immense utility and of their perfectly innocuous character, the Count has applied to them with all confidence to all of the human beings. Further, in order to observe closely in numerable cases of disease, and the better to study the effect of these remedies, he held in his mention at Bologna, for more than ten years, public and private consultations in the presence of physician and surgeons who had attached themselves to him the purpose of being present at the sitting. It may be added of high person ages of all nations, physicians and even large medical bodies.

But undoubtedly the German founder of Homeopathy Samuel Hahnemann and his doctrine have nonetheless influenced Mattei’s mind in his patients researches, leading principle trying to investigate the immediate effects of remedies and bring them into practical service according to the familiar rule.

On the other hand, he borrowed from Paracelsus the process of preparing the vegetable substances by means of a more or less complicated mode of fermentation, called “cohobation”, and also the final combination of a number of ingredients with similar or supplementary effect to form a complex medicinal unity.

Mattei had written his first book in 1874 in Italian language, which was then published in other languages. When the Count Mattei aged in 1887 he had handed over all his work to his adopted son Mario Venturoli.

Mattei has applied himself in his lifetime to the discovery of Materia Medica capable of modifying; not only the manifestation or symptoms of disease, but also their principle, or to speak better their first cause. It is by means of a theory the simple, with curative agents which he called Electricity in the remedies (Electro-Homeopathy), so elementary that everyone may cure himself and his medicine is certainly the medicine of the future.

He died on 3rd of April 1896 at the magnificent castle of La Rochetta, situated in the heart of the Apennines. If there are but few honest hearts in this world, there is still enough remaining to bless his memory.