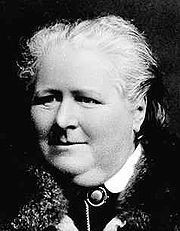 Frances Power Cobbe 1822 – 1904 was an Irish writer who was a social reformer, feminist theorist and pioneer animal rights activist.

From http://en.wikipedia.org/wiki/Frances_Power_Cobbe Born in Dublin, Cobbe founded the Society for the Protection of Animals Liable to Vivisection (SPALV) in 1875, the world’s first organization campaigning against animal experiments, and in 1898, the British Union for the Abolition of Vivisection (BUAV), two groups that remain active. Cobbe was a member of the executive council of the London National Society for Women’s Suffrage and writer of editorial columns for London newspapers on suffrage, property rights for women, and opposition to vivisection.

Under the influence of Theodore Parker,she became a Unitarian.

Almost forgotten today, Cobbe, the daughter of Frances Conway and Charles Cobbe, a Dublin landowner and magistrate, was raised in a privileged Anglo Irish family distinguished by service in the British military and the Anglican church.

Educated by a series of governess, Cobbe received a classical education, including French history and literature, from her father’s library. Finally, to her chagrin, she was sent to a Brighton boarding school to learn “accomplishments.”

Her childhood was filled with family stories of adventures abroad, especially to India. Devoutly religious, her family departed from strict Calvinism to a small degree by disbelieving in absolute predestination.

While in her teens, Cobbe began to question her received religion. In her twenties, Cobbe eventually denied immortality, the divinity of Christ, the Trinity, and the divine inspiration and authority of the Bible. After her mother died, Cobbe confided her ideas to her father who banished her from his house. A year later, he bade her to return to be his housekeeper.

Cobbe persisted in her religious studies through the works of Theodore Parker, specifically A Discourse of Matters Pertaining to Religion. She again became convinced of God, morality, and immortality. After Theodore Parker’s death, she edited a fourteen volume edition of his collected works. Theodore Parker’s theology presented God, not as a conquering King, but as a Father Mother, infinite in power, wisdom, and love. Shortly thereafter, Cobbe wrote her first book, Essay on Intuitive Morals (1855 and1857).

Upon her father’s death in 1857, Cobbe received a small annual annuity. The first year she went to the continent on that small inheritance. There her horizons were broadened when she met numerous independent and independent minded women: Elizabeth Barret Browning, Mary Somerville, Harriet Beecher Stowe, Harriet Hosmer, Charlotte Cushman, Rosa Bonheur, and Mary Lloyd.

Returning to England, Cobbe, now thirty five years of age, realized that she would have to work for a living. She moved to Bristol and began to teach in Mary Carpenter’s school, working with girls released from prison, inmates of work houses, prostitutes, and other unfortunates. Never married, Cobbe lived with Mary Lloyd in Bristol for 34 years, until Mary Lloyd’s death in 1896.

Active in several social reform movements, Cobbe placed women and the unfortunate at the center of her analysis. Today she is best known for her anti vivisection work, campaigning energetically against the use of live animals in scientific research.

Yet she had devoted much of her energy to the nineteenth century British women’s movement. An early British suffragist, she also supported higher education for women and the reform of poor laws. Her strongest efforts were directed to alleviating violence against women, especially violence by men against their wives. Why is it that the women who fight “within the belly of the beast” are the first women to be forgotten?

According to Cobbe’s analysis, men do not want women to understand that marriage is designed to deprive women of their resources, because if women do understand their bondage upon marriage, they would not willingly enter into marriage. Instead, men hypocritically insist that marriage is in the best interests of women. By middle age, Cobbe was extolling the advantages of the single life for women.

A tireless campaigner for women, Spender writes of Cobbe, “No attempt seems to have been made by Frances Power Cobbe to avoid the epithet of ‘strong minded’; she was obviously not concerned with men’s evaluation of her suitability as a servant for them.

“She was far more concerned with their unsuitability as leaders and lawmakers, and made many caustic and challenging comments about the limitations of male logic, the tyranny and injustice of male rules, and the flagrantly self-interested way men had organized society to make women available to them.

“The custom of marriage, and its enslavement of women, particularly attracted her attention and she was adamant in her assertion that men had deliberately and systematically arranged marriage so that women were deprived of all resources and that men could ‘do with them what they will’ - and this frequently meant they could use violence against women - with impunity.” (p. 430)

Since Christine de Pizan began the discussion of the “Woman Question” in 1405, the focus of the woman’s rights movement shifted from place to place at various times. Wherever and whenever it was safe for women to speak out in their own defense and to work to better the condition, they did.

So you find the woman question being actively debated in Italy, then France, then England, and later Germany and America. Whenever the movement became too dangerous for women in one place, it was kept alive for a time in another place. When the danger disappeared, the women’s rights movement was imported from its place of refuge. So, from the beginning, international feminism has played an important role in the feminist movement…