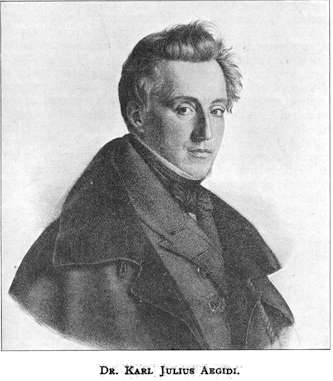 Carl Julius Aegidi 1795 - 1874 (photo used courtesy of Homéopathe International) was a German orthodox physician and army surgeon who converted to homeopathy to become the founder of the first Paediatric Homeopathic Hospital, under the patronage of Princess Fredericka of Prussia, called the Asylum for Sick Orphans in Konigsburg.

Aegidi favoured giving homeopathic remedies in water, and he also experimented with two remedies at the same time (Dual remedies), and had a lengthy correspondence with Samuel Hahnemann on this subject, though Samuel Hahnemann eventually decided to reject this method, and in a footnote to _Aphorism 272_ of the 5th Organon, Samuel Hahnemann wrote “Some homeopathists have made the experiment, in cases where they deemed one remedy homeopathically suitable for one portion of the symptoms of a case of disease, and a second for another portion, of administering both remedies at the same time; but I earnestly deprecate such a hazardous experiment, which can never be necessary, though it may sometimes seem to be of use“.

During the same year 1830 Samuel Hahnemann was approached by a distinguished and prominent Allopathic physician and army surgeon Dr Aegidi who had been suffering form debilitating pains for quite some time. Dr Aegidi decided to consult Samuel Hahnemann because none of the allopathic treatment received resulted in improvement or cure.

Samuel Hahnemann of course made sure that his patient, being a Doctor, would receive a sermon on allopathic medicine because he knew that a homeopathic cure was possible. It took five weeks before his patient was cured and as a result Dr Aegidi decided to study and practice the new art of healing with great success.

Aegidi was born in Kiauten in East Prussia, and he was the District Physician for Johannis burg and Tilsit. IN 1820, he was thrown from his carriage and severely injured his left shoulder.

The usual allopathic treatments of blood letting and antipholgistic treatments eased his pain for a few days, and then his symptoms agravated into heaviness in his left upper arm, with severe local pains and a swollen left shoulder and elbow joint. Aegidi grew thin and he had to give up his profession.

A year later, all movement of his left arm was impossible. Continued allopathic treatment did not improve his situation, and after two years of suffering, Aegidi approached Samuel Hahnemann in desperation. Samuel Hahnemann declared that Aegidi must have become exposed to ‘the itch’ previously and picked up an infection way before this current injury.

Aegidi recalled opening an abscess in a young girl in 1815, and pricking his finger at the time. “Now,” wrote Aegidi “I could look at the reason for my disease in quite another light”. Aegidi took Samuel Hahnemann’s nine powders over fifty days and found himself completely cured.

Commenced his practice as an Allopath, but was led to embrace the principles of Homeopathy by being himself relieved of a chronic trouble through Samuel Hahnemann’s personal treatment. He was physician to the Princess Fredericka of Prussia, and practiced in Dusseldorf, Konigsburg and Berlin.

He was one of the contributors to the Hahnemann jubilee of 1829, at which time he was district physician at Tilsit in Prussia. In the Zeitung list and in Frederick Hervey Foster Quin’s list he is located at Dusseldorf. He was a prolific writer, and his medical and social influence were very widely felt.

At one time Dr. Aegidi proposed to Samuel Hahnemann to administer a mixture of two highly potentized remedies each corresponding to different parts of the disease. In the potentized state the medicines thus mixed would be incapable of chemical reaction but would each act separately in its own sphere. Clemens Maria Franz Baron von Boenninghausen approved of the idea and Samuel Hahnemann was induced to present the matter to the meeting of the Central Society for 1833.

Samuel Hahnemann was persuaded that this would probably lead to the polypharmacy of the old school, and he decided to exclude this doctrine from the new edition of the _Organon_. Gottlieb Heinrich Georg Jahr afterwards mentioned Aegidi’s discovery, and Aegidi answered Gottlieb Heinrich Georg Jahr in an article published in the Archiv for 1834. Aegidi disavowed this method in 1857.

This matter caused Arthur Ernst Lutze, in his sixth edition of the _Organon_, to declare that Samuel Hahnemann favored alternation of remedies. Aegidi lead previously repudiated the notion, however.

Samuel Hahnemann, in a letter dated 1831, says: “Did John Ernst Stapf, as I requested, give you the news for publication that Dr. Aegidi, of Tilsit, has accepted the call as homeopathic physician in ordinary to her royal highness, Princess Fredericka of Prussia, in Dusseldorf, with a yearly salary of 600 thalers, traveling expenses, and the written official permission to prescribe his own medicines, and that he has entered on his office?”

In the Zeitung for May 18, 1874, is the following: A highly honored veteran, Dr. Julius Aegidi, Privy Councilor, etc., who, until the very last practised Homeopathy with unwonted vigor and interest, and one of its last remaining veterans, is now gone, having departed this life May 11, 1874, in his eightieth year. He died of uremia at Freienwalde, Germany. The Monthly Homeopathic Review for August, 1874, says that he died at Freienwalde in his seventy ninth year.