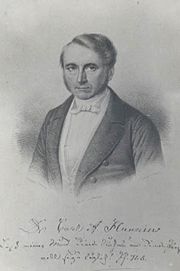 Karl Abraham Hunnius 1797 - 1851 was an Estonian orthodox physician and military doctor who converted to homeopathy to become the founder of the resort Haapsalu.

Around 1850 a homeopathic doctor named Karl Abraham Hunnius lived in Haapsalu. He was originally from Reval and had written his doctoral dissertation at the University of Tartu on ‘anthrax carbuncles’. From 1830 onwards he had practised as a homeopath.

Hunnius was one of the contributors to the Hahnemann Jubilee of 1829, at which time he was practicing in Esthland. He also practiced in Arnstadt, Saxony, from 1832-1834. His name is on the lists of the Zeitung and of Frederick Hervey Foster Quin.

Karl Hunnius was born to a merchant family. His father was a Professor of Theology. Hunnius visited the cathedral schools in Tallinn. Subsequently, he studied medicine from 1815 to 1819 at the University of Tartu.

He examined the mud of Haapsalu on its curative effect. Thus he laid the cornerstone for the resort Haapsalu and the spa in Estonia. Word quickly spread about the good reputation Haapsalus and treatments offered by Hunnius to the Russian aristocracy.

In 1825 with the help of rich patrons, Hunnius founded the first mud spa in the city. In 1845, in the death year of his wife, Hunnius opened a second one spa. Haapsalu rose quickly to become a popular and prosperous spa, frequented by Tsar Nicholas II (the Romanovs arrived at Haapsalu by special train and had their own private platform, as Tsar Nicholas II hoped the mud would cure his son’s haemophillia) and the aristocracy.

The spa tradition has continued until today in Haapsalu. In 1928, a monument to Hunnius was created by the Estonian artist Roman Haavamagi and erected at Haapsalu.

Similarly to the political history, the history of homeopathy in Estonia is closely connected with the development and the restrictions it experienced in the Tsardom. According to the Ukase of 26th September 1833 the practice of homeopathy was officially permitted in the Tsardom, but only for medical school graduates.

In addition, homeopathic pharmacies were expressly permitted in the provinces. In exceptional cases homeopathic physicians were even granted permission to have their own dispensary. Samuel Hahnemann’s doctrine had found supporters in Estonia already some years before.

The centre of this movement was Tartu where Ludwig Reinhold von Stegemann was active at the beginning of the 1820s. He had been appointed Privy Councillor by Tsar Nicholas I because of his medical achievements. In 1825, he wrote from Tartu to John Ernst Stapf, editor of the Archiv für die homöopathische Heilkunst (Homeopathy Archives), that he ‘was not exactly unhappy as a practitioner of homeopathy’ and he described two of his recent cases where the patients had been cured. His letter ends with the words: ‘It shall be an honour and joy to me to actively propagate this naturalistic healing method in Russia and Livonia.’

But his success led Gottlieb Franz Immanuel Sahmen, who was professor for pharmacology at the University of Tartu from 1826 to 1828, to pen a critical paper in which he did not actually generally reject homeopathy as inefficient, but refused the exclusiveness that Samuel Hahnemann and others claimed for their healing approach. He described homeopathic experiments that he himself had conducted and had not found satisfactory.

There can be no doubt that, already in the 1820s, homeopathy had found supporters as well as opponents in the area that is now Estonia. The sources do not reveal anything more about its further propagation.

A job advertisement published in a German specialist journal in 1855 gives the impression that homeopathy must have continued to be quite popular in Estonia: in Kertel an ‘experienced homeopathic physician’ was needed by several landowners who were prepared to offer a salary of 600 taler as well as a practice with 16 to 20 beds in a hospital.

Around 1850 a homeopathic doctor named Karl Abraham Hunnius (†1851) lived in Haapsalu. He was originally from Reval and had written his doctoral dissertation at the University of Tartu on ‘anthrax carbuncles’. From 1830 onwards he had practiced as a homeopath.

Another practitioner was a certain Dr Heinrich who lived in Tallinn (Reval) in the 1840s. He complained, in 1844, in the Allgemeine Homöopathische Zeitung (German homeopathic journal) about Dr Buchner’s judgment on homeopathy in Russia.

In Tartu, the aforementioned Ludwig Reinhold von Stegemann was succeeded by the physician Dr von Holst. Most certainly this was Johannes von Holst who had gained a doctorate in 1848 in Tartu with a dissertation about the muscle structure.

In Parnu there were two homeopathic physicians in the second half of the 19th century: Karl Adolph Knorre who defended his dissertation in Tartu in 1822, and Friedrich Gottlieb Landesen, who ran his medical practice for nearly 50 years as a homeopath before he retired. He, like his colleague, held a medical doctorate from the University of Tartu.

Between 1802 and 1898 the official language of the University of Tartu was German. Many of the professors teaching there were of German origin, too. Especially civil servants and physicians for the entire Tsardom were trained at this academic institution.

The fact that some of the doctors mentioned above were writing for German language journals shows that in Estonia fundamental homeopathic literature was read in this language.

There seems to have been a homeopathic pharmacy in Tallinn at the beginning of the 20th century. As in the Soviet Union, homeopathy in Estonia seems to have lost more and more ground after the First World War. No Estonian representatives were present on the LHMI conferences.

One of the most famous Estonian homeopaths, Alexander Rosendorff had to leave the country in 1942. He had studied medicine in Tartu and was introduced to naturopathy by Heinrich Lahmann in Dresden. He also became acquainted with electro homeopathy when he met Cesare Mattei.

The sign which he had installed in 1920 outside his practice in Reval, Waldstraße, however, said: ‘homeopath’. This practice in which he obviously applied a great variety of alternative therapies was so successful that, according to a contemporary, that his patients happily endured long waiting times.

Under Soviet rule homeopaths had a difficult life as their healing methods did not conform to the Pavlov influenced traditional medical approach that was popular with party members. But at about the same time as perestroika spread in the Soviet Union, homeopathy in Estonia experienced a revival.

At the beginning of the 1990s a few Russian physicians began to practise homeopathically. The first congress took place in 1996. In 1997, the Estonian Society of Homeopathy was founded which counted more than 50 members at the dawn of the 21st century. Some of them also belonged to the LMHI. In 1999 this association was granted, by the Estonian authorities, the privilege to issue tax deductible donation receipts.