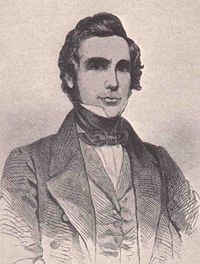 William Lovett 1800 - 1877 was a British activist and an important leader of the political movement Chartism.

As a young man Lovett moved to London to seek work as a cabinet maker. He was self educated, became a member of the Cabinetmakers Society, and later its President. He rose to national political prominence as founder of the Anti Militia Association (slogan: no vote, no musket), and was active in wider trade unionism through the Metropolitan Trades Union and Owenite socialism.

However, Lovett is best known for his role in the Chartist movement. Chartism, a campaign for parliamentary reforms intended to correct of the inequities remaining after the Reform Act of 1832, spanned roughly 1838 to 1850. In June 1836 Lovett founded the London Working Men’s Association with several radical colleagues including Henry Hetherington.

The LWMA’s membership was restricted to 100 working men, although it admitted 35 honorary members including the later Chartist leader Feargus O’Connor. Other honorary members included radical MP’s, but the LWMA was strictly a working class organisation, unlike groups such as the Birmingham Political Union, whose executive was dominated by the middle class.

The original purpose of the LWMA was education, but in 1838 Lovett and fellow Radical Francis Place drafted a parliamentary bill which was the foundation of the Peoples’ Charter, and the Association was effectively sidetracked into Chartism. The Bill was signed by Lovett and five other LWMA members, along with six Radical MPs including Daniel O’Connell.

Like most leading Chartists, Lovett was arrested. In February 1839 the first Chartist Convention met in London, and on 4 February 1839 unanimously elected Lovett as its Secretary. The Convention later moved to Birmingham. Many supporters gathered in the city’s Bull Ring, but local authorities had prohibited assembly there, and several were arrested.

The Convention condemned the actions of police in breaking up the “riot”, and posted placards which described the police who put down the riot as a “bloodthirsty and unconstitutional force”. Lovett, as secretary, accepted responsibility for the placards, and was arrested with James Watson, who had taken the placards to a printer.

Lovett was later found guilty of seditious libel, and was sentenced to twelve months imprisonment in Warwick Gaol. He was released in July 1840.

While in prison Lovett, with Collins, wrote Chartism, a New Organisation of the People, which focused on Chartist Education. Once released Lovett retired from politics, and in 1841 formed the National Association for Promoting the Political and Social Improvement of the People, an educational body. The body was to implement his New Move educational initiative, through which he hoped poor workers and their children would be able to better themselves.

The New Move was to be funded through a 1 penny per week subscription paid by those Chartists who had signed the national petition. Henry Hetherington and Francis Place supported the move, but Feargus O’Connor opposed the scheme in the Northern Star, believing it would distract Chartists from the main aim of having the petition implemented.

The New Move was unable to generate the popular support that Lovett had hoped for. Membership never surpassed 5000, and education was limited to Sunday schools. The National Association Hall was opened in 1842, but closed in 1857 when the operation was evicted. Lovett opened a bookshop, and wrote his autobiography, The Life and Struggles of William Lovett, in 1877.

He died impoverished the following year.