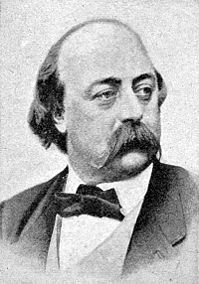 Gustave Flaubert 1821 – 1880 was a French writer, who is counted among the greatest of Western novelists. He is known especially for his first published novel, Madame Bovary (1857).

Flaubert writes of his character Pellerin in his book A Sentimental Education, that he is interested in homeopathy,

He began writing at an early age, as early as eight according to some sources. He was educated in his native city and did not leave it until 1840, when he went to Paris to study law.

In Paris, he was an indifferent student and found the city distasteful. He made a few acquaintances, including  Victor Hugo.

Towards the close of 1840, he travelled in the Pyrenees and Corsica. In 1846, after an attack of epilepsy, he left Paris and abandoned the study of law.

After leaving Paris, Flaubert returned to Croisset, close to Rouen, and lived with his mother. Their home near the Seine became Flaubert’s home for the rest of his life. Flaubert never married. From 1846 to 1854, he had an affair with the poet Louise Colet (his letters to her survive). According to his biographer Emile Faguet, his affair with Louise Colet was his only serious romantic relationship.

He sometimes visited prostitutes. Eventually, the end of his affair with Louise Colet led Flaubert to lose interest in romance and seek platonic companionship, particularly with other writers.

With his lifelong friend Maxime du Camp, he traveled in Brittany in 1846. In 1849-1850 he went on a long journey to the Middle East, visiting Greece and Egypt. In Beirut he contracted syphilis. He spent five weeks in Constantinople in 1850.

After 1850, Flaubert lived in Croisset with occasional visits to Paris and England, where he had a mistress. He visited Carthage in 1858 to conduct research for his novel Salammbô.

Flaubert was a tireless worker and often complained in his letters to friends about the strenuous nature of his work. He was close to his niece, Caroline Commanville, and had a close friendship and correspondence with George Sand.

The 1870s were difficult. Prussian soldiers occupied his house during the War of 1870, and in 1872, his mother died. After her death, he fell into financial straits. Flaubert suffered from venereal diseases most of his life. His health declined and he died at Croisset of a cerebral hemorrhage in 1880 at the age of 58. He was buried in the family vault in the cemetery of Rouen. A monument to him by Henri Chapu was unveiled at the museum of Rouen.