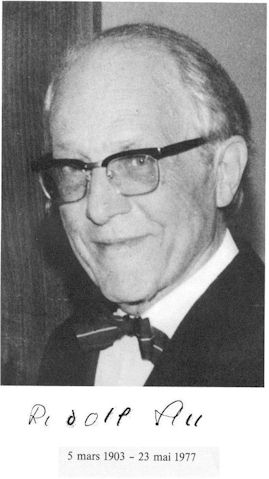 Rudolf Flury was also an innovator in the concept of miasmatic theory.

Flury maintained that the need to understand homeopathy on the philosophical basis was prompted by the fact that two hundred years of practical success in the healing of the sick had not succeeded in convincing the critics and that, by approaching it thusly, one avoids personal opinions and a priori prejudices of its adherents.

The credit of having rediscovered the Q-potencies for 20th and 21st century homoeopathy belongs to the abovementioned Swiss physician Dr Rudolf Flury.

He graduated from medical school in Zurich and received his doctorate in 1928 with a non homoeopathic thesis Ergebnisse der Graham’schen Cholecystographie am Zürcher Kantonsspital.

After his residency in Rorschach hospital he settled down in 1934 as a homoeopathic doctor in Berne. It was in 1942 that he discovered something that would decisively influence his approach to therapy.

“A hundred years later, in 1942, I noticed the large footnote to §270 in the 6th edition of the Organon. I then proceeded to make up the remedies myself, because there were no pharmacies at the time to do it for you.

“I made up my entire pharmacy and I give LM potencies. I very rarely give a centesimal or decimal potency. You can give LM safely every day. A child is given one globule of sulphur LM 30 in the morning and one in the evening. And if the children feel better one does not have to tell the parents: ‘Reduce the dose’, they will just forget about it.

“You don’t have to worry: once people feel better they forget about taking their medicine. I have never experienced any damage, initial aggravation, or anything of that kind and I have given LM almost exclusively for 33 years now.

“Samuel Hahnemann’s discovery of the LM potencies was an enormous step for homeopathic medicine.”

Flury’s pharmacy with the original Q potencies has been preserved as part of the homeopathic historical collection of the Institut für Geschichte der Medizin of the Robert Bosch Foundation in Stuttgart where it can be accessed for research purposes.

Towards the end of the 1940s Flury conducted his therapeutic experiments with the “LM  potencies” known among experts, but to start with only in the French speaking realm. Two lectures he gave in 1948 and 1949 at conferences of the Société Rhodanienne d’Homéopathie were published in 1950 under the title Les Dilutions au Cinquante-Millième de la VI.

After Samuel Hahnemann’s death the Q potencies fell, as we saw, into oblivion and so did the manufacturing method, although a few adepts (such as Thomas Roupell Everest) knew about them.

100 years passed before somebody again found the courage to prepare Q potencies: in 1943, Rudolf Flury manufactured his first Q  potencies in Switzerland. He was allegedly assisted by the nanny of his daughter who was born in that year.  He closely adhered to §270, as he wrote in a memorandum which has remained unpublished.

First 1 grain (0.062 g) of a C 3 trituration of a homeopathic substance was dissolved in 500 drops of a 20% spirit of wine. Flury did not weigh one grain each time but memorized the amount he had used the first time (the point of a knife). To simplify the counting of drops he used a graduated flask.

Of this solution Flury put one drop into a vial and added 100 drops of a 90% spirit of wine. 1 grain in 500 drops corresponds to a dilution ratio of 1:500. One drop of this in 100 drops of alcohol results in a dilution of 1:50,000. For the succussion Flury invented the following method which closely follows Samuel Hahnemann’s instructions: “The vial [with the 50 millesimal dilution] is shaken a hundred times by hand against a hard object (such as a leather bound book), not by machine. After I had wrecked several books a bookbinder made a special board of one cm thickness for me, covered in fabric […].”

Flury also recommended not to use vials that were too small (with a filling weight up to 3g), as one could not “hit them hard enough”. The Swiss homeopath also expressly defended Samuel Hahnemann’s laborious method of manual succussion.

“For Samuel Hahnemann who attached much value to the succussion process, many strong strikes, performed by a machine, can exceed the gentle effect of manually prepared medicines: one would end up with medicines that work with a strength proportional to that with which they were manufactured. One could not give these medicines repeatedly because of the risk of aggravation.”

The first homeopath to discover the changes in the sixth edition of the _Organon_ was the Swiss Rudolf Flury, who began to manufacture Q potencies right from 1942, just 100 years upon the completion of the manuscript of the 6th _Organon_.

It is obviously also him who invented the term “LM potencies”. Rudolf Flury communicated his discovery to his compatriot Charles Pahud, who introduced the Q potencies in the French speaking countries and also inspired Adolf Voegeli to prepare and prescribe Q potencies.

From the beginning, Arcana Remedies has called the 50 millesimal potencies LM potencies (L=50, M =1,000), based on the notations provided by Rudolf Flury and Adolf Voegeli…. Adolf Voegeli’s book Heilkunst in neuer Sicht published in 1955, was responsible for the sudden demand in the mid 1950s…