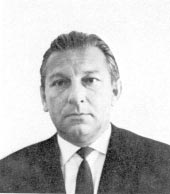 **Otto Eichelberger **1918 - 2005 MD was a German orthodox physician who converted to homeopathy, to become founder and honorary chairman of the German Society for Classical Homeopathy.

It owes its existence to the idea that people whose common concern for practice according to classical homeopathy, Samuel Hahnemann, required assembly under one association.

In 1980, therefore, Eichelberger suggested the creation of a society, and the 10th November 1981 saw the official founding meeting. In 1983, the DGKH became a nonprofit organization in the register court in Munich.

Dr. Eichelberger’s desire was to ensure the spread of homeopathy by teaching, practice and research, enabling homeopaths together to bring homeopathy to the level of a University course. On the impossibility of permanent funding for the proposed endowed Professorship by DGKH, this project failed.

Until the age of 74 years in 1992, this university course was conducted by Dr. Eichelberger DGKH as the first chairman. After his resignation of the members elected him to its honorary chairman in gratitude for his commitment and in appreciation of his services to homeopathy.

Here in the “natural healing practice” were Classical Homeopathy operates as an institution for the members, and as a University course establishing many future Homeopaths for German, there also appeared newsletters to assist in the teaching of classical homeopathy. Eichelberger ran this newsletter for nearly a quarter of a century, up to 1995, he published this in unbroken sequence.

The newsletters included the preparation and follow up from his seminars, which he has given since 1976, for doctors, student and naturopaths.  At Eichenberger’s last conference in 1995, we gave him, a faithful disciple, a dignified and touching farewell.

The incredible labor, productivity and inventiveness Eichelberger documented for his 70th Birthday in 1988, was supplemented with contributions from colleagues and friends, and gave testamony to an amazing life full of creativity, he produced a wealth of books, lectures, articles and visions. What praise could we give to celebrate such a happy life?

Thus now we have the task of commemorating Eichenberger, and savouring our memories of him as a learner and teacher, and remembering his contributions to homeopathy throughout his long life.

Eichelberger died in July 2005 at the age of 87 years. He was buried on 28 July - a bright summer’s day - accompanied by his family and the sympathy of his loyal friends and students at the Munich buried West Cemetery.