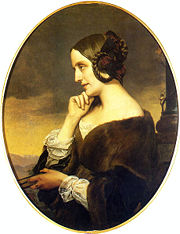 Marie d’Agoult was a patient of homeopath David Ferdinand Koreff who also treated her mother.

Marie d’Agoult’s daughter Cosima was married to Wilhelm Richard Wagner, and her son Olivier Emile Ollivier was a Cabinet Minister under Napoleon III.

The young Marie spent her early years in Germany and completed her education in a French convent after the Bourbon Restoration. She entered into an early marriage of convenience with Charles Louis Constant d’Agoult, Comte d’Agoult (1790-1875) on May 16, 1827, thereby becoming the Comtesse d’Agoult. They had two daughters, Louise (1828-1834) and Claire (1830-1912). They were divorced on August 19, 1835.

From 1835 to 1839 she lived with virtuoso pianist and composer Franz Liszt, who was five years younger, and was a rising concert star.

D’Agoult had three children with Franz Liszt, but they did not marry, maintaining their independent views and other differences, while Franz Liszt was busy composing and touring throughout Europe. Their children were Blandine (1835-1862), who was the first wife of Olivier Emile Ollivier but died at the age of 26; Cosima (1837-1930) (who married Wilhelm Richard Wagner, the second marriage for them both); and Daniel (1839-1859), who was already a promising pianist and gifted scholar when he died of tuberculosis at age 20.

She died in Paris, and was buried in Division 54 of Père Lachaise Cemetery.