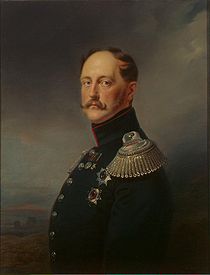 Tsar Nicholas I was also a student of Carl Bernhard von Trinius at the Botanical Museum in St. Petersburg.

Tsar Nicholas I authorised the homeopathic treatment of his army, having first observed such treatment of cadets at the Naval College in Oranienbaum by O F Scherring (Martin Dinges, Patients in the History of Homeopathy, (European Association for the History of Medicine and Health Publications, 2002). Page 157-159).

In 1825, Friedrich Gottlieb Landesen was appointed Privy Councillor by Tsar Nicholas I because of his medical achievements.

In 1829, Christian Theodore Herrmann conducted the first clinical trials with homeopathy on the intermittent fevers prevalent in Tulzyn in Podolia in 1830 at the direction of Tsar Nicholas I. In 1833, homeopathy was successfully sanctioned in Russia by Tsar Nicholas I.

Tsar Nicholas I ordered the translation of Martin Wilhelm von Mandt’s pamphlet on homeopathy translated into Russian, and he had it distributed to all his hospital management administrators and staff physicians. He said ’We are crowning the work of Peter’ (the Great). Tsar Nicholas I also sent his young scholars a to all parts of Europe, thus ensuring that Moscow University was greatly energised.

Tsar Nicholas I also established an Exemplar hospital with Martin Wilhelm von Mandt in post, and this hospital functioned from 1853 - 1856. Tsar Nicholas I personally influenced many doctors to practice homeopathy, and he carried his own personal case of homeopathic remedies with him everywhere (Dana Ullman, The Homeopathic Revolution: Why Famous People and Cultural Heroes Choose Homeopathy. (North Atlantic Books, 2007). Page 279).

Tsar Nicholas I, who was familiar with the “half-homeopathic” method of Martin Wilhelm von Mandt and often visited the Krasnosel’sk and Medved’ Military Hospitals, he both encouraged O F Scherring to continue with the treatment and regretted that such a fine “specific” treatment was not widely used in all Russian medical facilities…

When Grand Duke Constantine openly patronized homeopathy by keeping a homeopathic doctor as physician in ordinary, two of his brothers, Grand Duke Mikhail and Tsar Nicholas I, also became interested in the new teaching.

According to Carl Bojanus, to whom this story was told by Vasily Deriker, Tsar Nicholas even proposed in 1825 to O E Scherring who had been converted to homeopathy by Dr. Adam, and treated successfully an epidemic of eye inflammation with homeopathic medicines, although, as mentioned above, calling this method “specific”, “to promote this method of treatment decidedly”.

However, at that time the “promotion” of homeopathy under Nicholas I, even when called “specific treatment”, did not go through for O E Scherring’s fear to be accused by his medical superiors.

Several years later, Grand Duke Mikhail Pavlovich reportedly turned to the Tsar Nicholas I, asking him to support homeopathy. According to the Highest (i.e., Tsar’s) Order, the Medical Military Department was requested to conclude a contract with Christian Theodore Herrmann in February 1829.

Christian Theodore Herrmann pledged that for over a year he would treat homeopathically patients suffering from different diseases, like diarrhea, fevers of different origin, etc., in the military hospital which was to be established in the small town of Toulchin (Podolian province, Ukraine) for a reward of 12,000 rubles.

Moreover, if Christian Theodore Herrmann was successful in his treatment, his contract would be renewed. The contract provided independence in all the matters concerning Christian Theodore Herrmann’s covenanted activity, which granted him also freedom from customs’ restrictions, including the non opening of the box with homeopathic drugs at the customs.  Later this experiment was continued in St. Petersburg Military hospital.

The first cholera pandemic began in Russia in 1823 and reached its greatest intensity in 1830 and 1831. When the peak of the epidemic passed, more than a quarter of a million of the Tsar’s subjects had died, and the overall mortality among those stricken stood just below 50 per cent.

The cholera’s influence, if not its immediate effect, permeated the Russian system: recruiting for the army stopped, interior commerce came to a standstill, and quarantine regulations strait jacketed the nation. The people became restive; riots and rebellions broke out; and the international crises of 1830-31, found the Russian economy and military so hampered in their effectiveness that Chernyshev that the cholera ‘places us in such a situation as never before existed’.

Nicholas was not brought up to be the Emperor of Russia, as he had two elder brothers before him. As such, in 1825, when Tsar Alexander I suddenly died of typhus, Nicholas was caught between swearing allegiance to his second eldest brother Constantine Pavlovich and accepting the throne for himself.

The interregnum lasted until Constantine Pavlovich who was in Warsaw at that time confirmed his refusal. Additionally, in 25 December (13 Old Style) Nicholas issued the manifesto claiming his accession to the throne. That manifesto named 1 December as official date of his reign start.

During that confusion a plot was hatched by the military to overthrow Nicholas and to usurp power. This led to the Decembrist Revolt in 26 December (14 Old Style), 1825 where Nicholas was successful in suppressing the uprising.

Nicholas completely lacked his brothers’ spiritual and intellectual breadth; he saw his role simply as one paternal autocrat ruling his people by whatever means were necessary. Having experienced the trauma of the Decembrist Revolt, Nicholas I was determined to restrain Russian society. The Third Section of the Imperial Chancellery ran a huge network of spies and informers with the help of Gendarmes. The government exercised censorship and other controls over education, publishing, and all manifestations of public life.

In 1833 the minister of education, Sergey Uvarov, devised a program of “Autocracy, Orthodoxy, and Nationality” as the guiding principle of the regime. The people were to show loyalty to the unlimited authority of the Tsar, to the traditions of the Russian Orthodox Church, and, in a vague way, to the Russian nation. These principles led, broadly speaking, to repression in general and to suppression of non Russian nationalities and religions in particular. For example, the government suppressed the Greek Catholic Churches in Ukraine and Belarus in 1839. See also Cantonists.

Nicholas disliked serfdom and toyed with the idea of abolishing serfdom in Russia, but did not do so for practical reasons of state. He feared the landowners and believed they might turn against him, if he abolished serfdom. However, he did make some efforts to improve the lot of the state peasants (serfs owned by the government) with the help of the minister Pavel Kiselev.

Nicholas died on 2 March 1855. The cause of his death is unclear though many believe he poisoned himself after learning of Russia’s defeat at Evpatoria during the Crimean War.