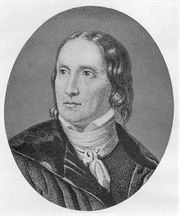 Friedrich Carl von Savigny 1779 - 1861 was one of the most respected and influential 19th century German jurists.

Friedrich Carl von Savigny was the brother in law of Bettina von Arnim, and he received a homeopathic doctor dispatched by his son Leo von Savigny 1820 - 1886, to treat his leg injury.

Marburg can be counted among the sites of German literature, since it hosted the “Marburger constellation”, a community of Romantic scholars around Friedrich Carl von Savigny, whose changing members were guests in the small town on the Lahn for a time, and some of whom later left a notable stamp on the intellectual history of the era.

Thus Jacob and Wilhelm Grimm were surrounded by an extremely fruitful and inspiring group of intellectuals in Marburg who conducted stimulating conversations with a lively exchange of ideas, a group which they presumably would not have been a part of in this form without Savigny.

Savigny was born at Frankfurt, of a family recorded in the history of Lorraine, deriving its name from the castle of Savigny near Charmes in the valley of the Moselle.

Left an orphan at the age of 13, Savigny was brought up by a guardian until, in 1795, he entered the University of Marburg, where, though in poor health, he studied under Anton Bauer and Philipp Friedrich Weis, the former one of the most conspicuous pioneers in the reform of the German criminal law, the latter distinguished for his knowledge of medieval jurisprudence.

After the fashion of German students, Savigny visited several universities, notably Jena, Leipzig and Halle; and returning to Marburg, took his doctor’s degree in 1800. At Marburg he lectured as Privatdozent on criminal law and the Pandects.

In 1803 he published his famous treatise, Das Recht des Besitzes (The law of possession). It was at once hailed by the great jurist Anton Friedrich Justus Thibaut as a masterpiece; and the old uncritical study of Roman law was at an end.

It quickly obtained a European reputation, and still remains a prominent landmark in the history of jurisprudence. In 1804 Savigny married Kunigunde Brentano, the sister of Bettina von Arnim and Clemens Brentano the poet, and the same year started on an extensive tour through France and south Germany in search of fresh sources of Roman law. In this quest, particularly in Paris, he was successful.

In 1808 he was appointed by the Bavarian government ordinary professor of Roman law at Landeshut, where he remained a year and a half. In 1810 he was called, chiefly at the instance of Wilhelm von Humboldt, to fill the chair of Roman law at the new University of Berlin.

Here one of his services was to create, in connection with the faculty of law, a “Spruch Collegium”, an extraordinary tribunal competent to deliver opinions on cases remitted to it by the ordinary courts; and he took an active part in its labours.

This was the busiest time of his life. He was engaged in lecturing, in the government of the university (of which he was the third rector), and as tutor to the crown prince in Roman, criminal and Prussian law. An important consequence of his residence in Berlin was his friendship with Barthold Georg Niebuhr and Karl Friedrich Eichhorn.

In 1814 appeared his pamphlet Vom Beruf unserer Zeit für Gesetzgebung und Rechtswissenschaft (new edition, 1892). It was a protest against the demand for codification, and was intended as a reply to Anton Friedrich Justus Thibaut’s pamphlet urging the necessity of forming a code for Germany which should be independent of the influence of foreign legal systems.

In this famous pamphlet Savigny did not oppose the introduction of new laws, or even a new system of laws, but only objected to the proposed codification on two grounds:

The enduring value of this pamphlet is that it saved jurisprudence from the hollow abstractions of such a work as the Institutiones juris naturae et gentium of Christian Wolff, and proved that a historical study of the positive law was a condition precedent to the right understanding of the science of all law.

In 1815 Savigny founded, with Karl Friedrich Eichhorn, and Johann Friedrich Ludwig Goschen, the Zeitschrift für geschichtliche Rechtswissenschaft, the organ of the new historical school, of which he was the representative.

In this periodical (vol. iii. p. 129 seq.) Savigny made known to the world the discovery at Verona, by Barthold Georg Niebuhr, of the lost text of Gaius, pronouncing it, on the evidence of that portion of the manuscript submitted to him, to be the work of Gaius himself and not, as Barthold Georg Niebuhr suggested, of Ulpian.

The record of the remainder of Savigny’s life consists of little else than a list of the merited honours which he received at the hands of his sovereign, and of the works which he published with indefatigable activity.

In 1815 appeared the first volume of his Geschichte des römischen Rechts im Mittelalter, the last of which was not published until

His design was in some respect narrowed; in others it was widened. He did not continue the narrative beyond the 16th century, when the separation of nationalities disturbed the foundations of the science of law.

His treatment of the subject was not merely that of a bibliographer; it was philosophical. It revealed the history of Roman law, from the breaking up of the empire until the beginning of the 12th century, and showed how, though considered dead, the Roman law lived on in local customs, in towns, in ecclesiastical doctrines and school teachings, until it blossomed out once more in full splendour in Bologna and other Italian cities.

In 1822 a serious nervous illness attacked him, and compelled him to seek relief in travel. In 1835 he began his elaborate work on contemporary Roman law, System des heutigen römischen Rechts (8 vols., 1840-1849).

His activity as professor ceased in March 1842, when he was appointed “Grosskanzler” (High Chancellor), the title given by Frederick the Great in 1746 to the official at the head of the juridical system in Prussia, as in this position he carried out several important law reforms in regard to bills of exchange and divorce. He held the office until 1848, when he resigned, not altogether to the regret of his friends, who had seen his energies withdrawn from jurisprudence without being able to flatter themselves that he was a great statesman.

In 1850, on the occasion of the jubilee of his obtaining his doctor’s degree, appeared in five volumes his Vermischte Schriften, consisting of a collection of his minor works published between 1800 and 1844. This event gave rise to much enthusiasm throughout Germany in honour of “the great master” and founder of modern jurisprudence.

In 1853 he published his treatise on Contracts (Das Obligationenrecht), a supplement to his work on modern Roman law, in which he clearly demonstrates the necessity for the historical treatment of law. Savigny died at Berlin.

His son, Karl Friedrich von Savigny (1814-1875), was Prussian minister of foreign affairs in 1849. He represented Prussia in important diplomatic transactions, especially in 1866.

Savigny belongs to the so called historical school of jurists, though he cannot claim to be regarded as its founder, an honour which belongs to Gustav Hugo. In the history of jurisprudence Savigny’s great works are the Recht des Besitzes and the Beruf unserer Zeit für Gesetzgebung above referred to. The former marks an epoch in jurisprudence.

Rudolf von Jhering said: “With the Recht des Besitzes the juridical method of the Romans was regained, and modern jurisprudence born.” It marked a great advance both in results and method, and rendered obsolete a large literature.

Savigny sought to prove that in Roman law possession had always reference to “usucapion” or to “interdicts”; that there is not a right to continuance in possession but only to immunity from interference; possession being based on the consciousness of unlimited power.

These and other propositions were maintained with great acuteness and unequalled ingenuity in interpreting and harmonizing the Roman jurists. The controversy which was carried on in Germany by Rudolf von Jhering, Baron, Gans and Bruns shows that many of Savigny’s conclusions were not accepted.

The Beruf unserer Zeit, in addition to the more specific object the treatise had in view, which has been already treated, expresses the idea, unfamiliar in 1814, that law is part and parcel of national life, and combats the notion, too much assumed by French jurists, especially in the 18th century, and countenanced in practice by Bentham, that law might be arbitrarily imposed on a country irrespective of its state of civilization and past history.

Of even greater value than his services in consolidating “the historical school of jurisprudence” is the emphatic recognition in his works of the fact that the practice and theory of jurisprudence cannot be divorced without injury to both.