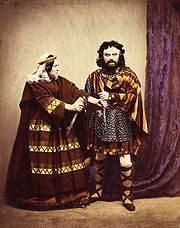 After preparatory education at Worplesdon and at Greenford, near Harrow, he was sent to Eton College, where he remained three years. In 1827, he was offered a cadetship in the East India Company’s service, which he was prepared to accept if his father would settle an income of £400 on his mother. The elder Kean refused to do this, and his son determined to become an actor.

Charles made his first appearance at Drury Lane on 1 October 1827 as Norval in John Home’s Douglas, but his continued failure to achieve popularity led him to leave London in the spring of 1828 for the provinces.

In Glasgow, on 1 October in that year, father and son acted together in Arnold Payne’s Brutus, the elder Kean in the title part and his son as Titus.

After a visit to the United States in 1830, where he was received with much favour, he appeared in 1833 at Covent Garden as “Sir Edmund Mortimer” in George Colman’s The Iron Chest, but his success was not pronounced enough to encourage him to remain in London, especially as he had already won a high position in the provinces.

Returning to England, he entered on a successful engagement at the Haymarket, and in 1850, with Robert Keeley, became lessee of the Princess’s Theatre, London. The most noteworthy feature of his management was a series of gorgeous Shakespearean revivals that aimed for “authenticity”.

Kean also mentored the young Ellen Terry in juvenile roles. Charles Kean was not a great tragic actor. He did all that could be done by the persevering cultivation of his powers, and in many ways manifested the possession of high intelligence and refined taste, but his defects of person and voice made it impossible for him to give a representation at all adequate of the varying and subtle emotions of pure tragedy.

From his “tour round the world” Kean returned in 1866 in broken health, and died in London on 22 January 1868 at the age of 57. He is buried at Horndean, Hampshire