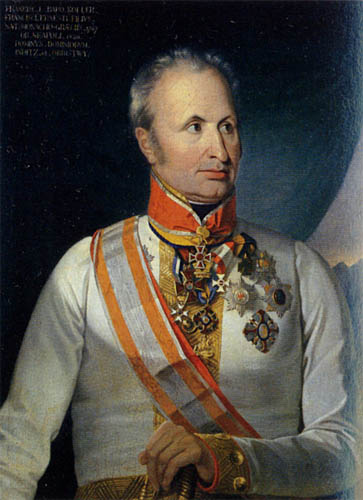 Baron Franz von Koller (Francis) 1767 - 1826 was an Austrian General, the Governor of Bohemia, the Representative of the Emperor of Austria in London (Francis I of Austria). Koller fought in France, Belgium, Germany and Italy.

Franz Koller was a staunch advocate of homeopathy, and a patient of Georg von Necker.

Franz Koller is credited with the introduction of homeopathy into Italy in 1821.

Homeopathy was introduced into Italy by Baron Franz Koller, who upon arrival in Italy, sent for his homeopathic physician Georg von Necker, who then proceeded to live in Naples for four years, during which time he converted Francesco Romani, Giuseppe Mauro and Cosmo Maria De Horatiis, to homeopathy:

… homeopathy was sown in the soil of Naples by the Austrians who entered that city in March, 1821, “to deprive its noble inhabitants of the liberty they had gained bv the revolution of the same year.

The general in command of the army of occupation, Baron Franz Koller, a devoted friend of homeopathy, presented to the Royal Academy of Naples a copy of Samuel Hahnemann’s Organon and Materia Medica, inviting them to make use  of it for the benefit of conscience and humanity.”

In 1821, Franz Koller was in charge of Napoleon Bonaparte on Elba, where he, between 1821-1826, he built the present large castle, which connect to the tower and facade church.

General Baron Franz Koller, the Austrian ambassador and the State Commissioner, who was accompanied by the slaughter of Napoleon Bonaparte to the island of Elba, a soldier who dominated the Napoleonic wars in the high position of power and influence not only the army but also the holder of ten honorary orders, and the owner of the Ob?íství estate. Franz Koller’s father was a military doctor. His mother came from a low of German nobility in Hungary, where both parents moved to the Czech Republic, and then settled in Munich.

After his studies at the Prague school, Franz Koller entered the Military at the rank of lieutenant. In 1804 he married Johanna Grätzlerovou of Gränzensteinu. Many military successes followed, and Koller became a General Major. In 1810 he was promoted to the status of Baron. As Adjutant General to Field Marshal Karl Philipp Schwarzenberg attended the memorable battle of 1813 Nations against Napoleon Bonaparte in Leipzig in which Napoleon Bonaparte was finally defeated.

Franz Koller was promoted to General Field Marshal. In 1814, he was appointed Commissioner for Austria, together with Commissioner Šuvalovem for Russia and the Commissioner for Prussia Gruchsessem, to escort the defeated Napoleon Bonaparte to Elba.

Koller was appointed Chief Landlord and Chief of the Austrian army in Naples, and in 1816, Koller was sent to Prague to establish the field armies in Bohemia, and he was also the Division Commander in Prague.

At that time, Koller bought the estate Ob?íství in 1817 and then stayed almost four years, alternately in Prague or Ob?íství.

In 1820 Naples erupted in new unrest, and Koller was sent in with the Austrian army. A year later, Koller appointed Chief and General Director of the Austrian army. General Koller and his family lived in Naples, but he did not forget to Ob?íství. Koller sent orders sent to his officials, regarding his estates, for the construction of a road from Ob?íství Št?pánskému to the ferry.

Baron Franz Koller died aged just 59 years old, leaving a bereaved wife and sons, Wilhelm, Alexander and Johann, who moved in 1827 from Naples to the Czech Republic and took over the estate Ob?íství.

General Koller’s remains were transferred on April 30 1827 to the church in filiálního in Libis. On the day of the funeral at 7am, there gathered in Libis the priesthood and Grenadier Division with the Hussar Squadron.

An hour later, the procession went out of church in front of a huge crowd of the population, and a parade led the procession through Prague. This impressive procession was attended by 10,000 to 12,000 people from near and far.

When the procession came to the church, only the church clergy, relatives, bureaucracy, army and representatives of leading notables were admited to the church. Most people had to stay outside until after the sermon, when they were then allowed in to view the mourning decoration…

At the end of October 1828, Koller’s collections were carefully packaged, loaded on a ship waiting at the castle, taken in Magdeburg and then after Sprév? to the Berlin museum. Other objects were distributed by his family, and some of these collections were acquired by Yugoslav Archbishop Štrossmajer for the Academy of Arts in Zagreb.

General Baron Koller was a man known for his education and he was a member of several learned societies.

The correspondence of Franz Koller with the British Foreign Office during 1841 are in the National Archives.

In 1842, Franz Koller sold a manuscript of Dante’s Divine Comedy to the British Museum.

Franz Koller travelled to Petra to describe the inland route from Mount Sanai to Akabah. _Baron Koller’s itinerary of his tour to Petra, describing an Inland Route from Mt. Sinai to Akabah. JRGS XII, 1843, pp 75-79 _

Karl Koller 1857 -1944 was an Austrian ophthalmologist who began his medical career as a surgeon at the Vienna General Hospital, and was a colleague of Sigmund Freud, and famous for being the first person to use cocaine as an anesthetic.

Noah Koller was an American homeopath in 1873, and he was a colleague of Constantine Hering, and he contributed to the proving of Lycopodium in The Encyclopedia of Pure Materia Medica of Timothy Field Allen, edited by Richard Hughes.