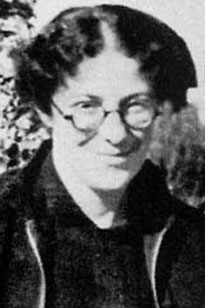 Sylvia Warner was an advocate of homeopathy. Between 1938 and 1978, Sylvia Warner and William Keepers Maxwell exchanged over 1300 letters, many of them discussing homeopathic remedies: “You know I am the Maxwell family prescriber…” Sylvia Warner joked.

As a child, Sylvia seemingly enjoyed an idyllic childhood in rural Devonshire, but was strongly affected by her father’s death.

She moved to London and worked in a munitions factory at the outbreak of World War I. She was friendly with a number of the “Bright Young Things” of the 1920s. Her first major success was the novel Lolly Willowes.

In 1926, she met Valentine Ackland, a young woman poet. The two women fell in love and settled at Frome Vauchurch in Dorset. Alarmed by the growing threat of fascism, they were active in the Communist Party of Great Britain, and visited Spain during the Civil War. They lived together from 1930 until Valentine Ackland’s death in 1969.

Early in her career she researched 15th and 16th century music, and spent ten years as one of the editors of the substantial Tudor Church Music. In 1934 she published along with Valentine Ackland a volume of verse called Whether a Dove or a Seagull.

These novels are remarkable in that each is so different from the other. However, recurring themes are evident in a number of her works. These include a rejection of Christianity (in Mr Fortune’s Maggot, and in Lolly Willowes, where the protagonist becomes a witch); the position of women in patriarchal societies (Lolly Willowes, Summer Will Show, The Corner that Held Them); ambiguous sexuality, or bisexuality (Lolly Willowes, Mr Fortune’s Maggot, Summer Will Show); and lyrical descriptions of landscape.

She also wrote many short stories, including the collections A Moral Ending and Other Stories, The Salutation, More Joy in Heaven, The Cat’s Cradle Book, A Garland of Straw, The Museum of Cheats. Winter in the Air, A Spirit Rises, A Stranger with a Bag, The Innocent and the Guilty, One Thing Leading to Another and a sequence set in the supernatural Kingdoms of Elfin, and also a well received biography of the novelist Terence Hanbury White, which The New York Times declared “a small masterpiece which may well be read long after the writings of its subject have been forgotten.”

In addition, she wrote an autobiography entitled Scenes of Childhood and a translation of Contre Saint Beuve by Marcel Proust, and published letters and diaries.

In the 1970s she became known as a significant writer of feminist or lesbian sentiment, and her novels were among the earlier ones to be revived by Virago Press. Selected letters of Sylvia Townsend Warner and Valentine Ackland were edited by Susanna Pinney and published in 1998 under the title Jealousy in Connecticut.