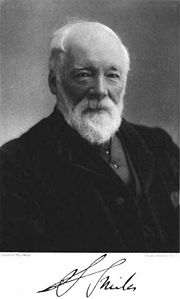 Samuel Smiles was a patient of both homeopathy and hydrotherapy, though he was at first quite dubious, he persevered with his treatment.

Samuel Smiles called on John Epps to thank him for his review of his book Physical Education, but Smiles did not take to John Epps.

Born in Haddington, the son of Samuel Smiles of Haddington and Janet Wilson of Dalkeith, Smiles was one of eleven surviving children. The family were strict Cameronians. He left school at the age of 14 and was apprenticed to a doctor, an arrangement that eventually enabled Smiles to study medicine at the University of Edinburgh.

His father died in the cholera epidemic of 1832, but Smiles was enabled to continue with his studies, supported by his mother who kept running the family shop selling hardware, books, etc, firm in the belief that “The Lord will provide”.

Her example, working ceaselessly to support herself and his nine younger siblings, was a strong influence on his future life, though he developed a more benign and tolerant outlook somewhat at odds with his Cameronian forebears.

While studying and after graduating, he campaigned for parliamentary reform, contributing articles to the Edinburgh Weekly Chronicle and the Leeds Times.

Samuel married Sarah Ann Holmes Dixon in Leeds in December 7, 1843. They had three daughters, Janet, Edith and Lillian, and two sons, William and Samuel. In his late teens, Samuel junior contracted a lung disease, and his father was advised to send him on a long sea voyage.

The letters young Samuel wrote home, and the log he kept of his journey to Australia and America between February 1869 and March 1871, were later edited by his father and published in London in 1877, under the title A Boy’s Voyage Round the World.

In 1838, he was invited to become the editor for the Leeds Times, a position which he accepted and filled until 1845.

In May 1840, Smiles became Secretary to the Leeds Parliamentary Reform Association, an organisation that held to the six objectives of Chartism: universal suffrage for all men over the age of 21; equal-sized electoral districts; voting by secret ballot; an end to the need of MPs to qualify for Parliament, other than by winning an election; pay for MPs; and annual Parliaments.

In 1845, Samuel Smiles left the Leeds Times and became secretary to the Leeds and Thirsk Railway and then, nine years later, the South Eastern Railway. In 1866, he left this position to be president of the National Provident Institution, but left in 1871, after suffering a debilitating stroke. He recovered from the stroke, eventually learning to read and write again, and he even wrote books after his recovery.

He died in Kensington and was buried in Brompton Cemetery.

As editor of the Leeds Times, he advocated radical causes ranging from women’s suffrage to free trade to parliamentary reform. But by the late 1840s, Smiles became concerned about the advocation of physical force by Chartists Feargus O’Connor and George Julian Harney, though he seems to have agreed with them that the movement’s current tactics were not effective, saying that “mere political reform will not cure the manifold evils which now afflict society.”

In the 1850s he seems to have completely given up on parliamentary reform and other structural changes as a means of social advance. For the rest of his career, he advocated individual self improvement. Smiles is best known today as the writer of books extolling virtues of self help, and biographies lauding the achievements of “heroic” engineers.

Smiles’ self help books have been cited as influential on the New Thought Movement in late 19th century America and England, and, in particular, on the career of the New Thought author Orison Swett Marden, who said that his early ambition had been to become “the Samuel Smiles of America”

Most of Smiles’ biographies were contained in the four volume work, Lives of the Engineers, but he also wrote many other biographies. He selected the topics of his biographies as a means of emphasising his thesis of self help. These works have come to exemplify Victorian values for the modern reader. He received some criticism in his own time from socialists because of his emphasis on individual achievement.

He was a prolific author of books and articles.