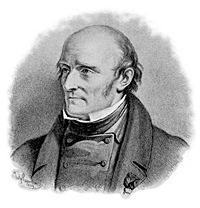 Per Henrik Ling 1776 – 1839 was a Swedish medical gymnastic practitioner.

Per Henrik Ling’s daughter was married to Peter Jacob Liedbeck, and his Swedish Movement Cure, called gymnastics, was avidly taken up by homeopaths, who saw at once the genius in this new method.

No doubt also because Per Henrik Ling’s Swedish Movement Cure was immediately condemned by ‘old fogeydom’ (orthodox physicians), homeopaths rushed to translate Ling’s essays and wrote books on his method and carried it all around the World, where it gave rise to osteopathy and chiropracty, see Matthew James Chapman, Diocletian Lewis, Peter Jacob Liedbeck, Mathias Roth, Bayard Taylor, Charles Fayette Taylor, George Herbert Taylor, and many others.

Homeopathy was introduced into the Central Gynmastic Institute of Stockholm set up by Per Henrik Ling, and by the time of his death, Ling’s system of Kinesitics was spreading throughout the known World.

Ling was a fencing master, a lecturer in Norse mythology, poet, and a teacher of modern languages at the University of Lund.

Ling was born at Ljunga in the south of Sweden in 1776, the son of a minister, Lars Peter Ling, and the former Hedvig Maria Molin. Through his mother, he was a great-great grandson of the famous Swedish scientist Olof Rudbeck.

After graduating from Växjö gymnasium in 1792, he studied theology at Lund University from 1793, but went to Uppsala University and completed his degree there in 1797. He then went abroad during seven years: on his first voyage he befriended a certain “Ming”, a Chinese fellow who was both a martial artist and Tui na practitioner.

They soon became fencing and exercise partners in Copenhagen, where Ling studied at the university and taught modern languages. During the first four years of his voyage Ling had received much guidance by his Chinese friend more specifically on fighting, exercise and health philosophies that fascinated him for their amazing integration and efficiency.

His journey then took him to Germany, France and England during which he continued to acquire more knowledge on his friend’s special “gymnastics” or exercises designed to improve the strength, flexibility and overall stamina necessary to his fencing passion.

Financial difficulties, joint (overuse), injuries and rheumatism had him return to Sweden where he took the time to heal himself by applying these pressing pulling and squeezing exercises and maneuvers he had learned.

Having established himself as a teacher in these arts at Lund, he was appointed fencing master to the university of Uppsala (1805). He found that his daily exercises had completely restored his bodily health, and his thoughts now turned towards applying this experience for the benefit of others.

He saw the potential for adapting these techniques to promote better health in many situations and thus attended classes on anatomy and physiology, and went through the entire curriculum for the training of a doctor.

He then elaborated a system of gymnastics, exercises and maneuvers, divided into four branches, (1) pedagogical, (2) medical, (3) military, (4) aesthetic, which carried out his theories and would demonstrate the required occidental scientific rigor to be integrated or approved by established medical practitioners.

After several attempts to interest the Swedish government, Ling at last in 1813 obtained their co-operation, and the Royal Gymnastic Central Institute, for the training of gymnastic instructors, was opened in Stockholm, with himself as principal.

The orthodox medical practitioners were naturally opposed to the larger claims made by Ling and his pupils respecting the cure of diseases so far at least as anything more than the occasional benefit of some form of skillfully applied massage and maneuvers was concerned.

Ling died in 1839, having previously named as the repositories of his teaching his pupils Lars Gabriel Branting, who succeeded him as principal of the Institute, and August Georgii, who became sub-director; his son, Hjalmar Ling, being for many years associated with them. All these, together with Thure Brandt, who from about 1861 specialized in the treatment of women (gynecological gymnastics), are regarded as the pioneers of Swedish medical gymnastics.

Ling and his earlier assistants left no proper written account of their treatment, and most of the literature on the subject is repudiated by one set or other of the gymnastics practitioners. The origins and greatest influences of Dr Ling’s work was certainly those of his Chinese friend “Ming” who had introduced him to Tu ina and martial arts.

The loss of filiation with these oriental influences where uncovered inadvertently by Johan Georg Mezger (1838-1909) who coined a “reduced set” of maneuvers and techniques of Dr Ling’s system: the ”Swedish massage” system. These techniques where Effleurage (Long, gliding strokes), ”Petrissage” (Lifting and kneading the muscles), ”Friction” (Firm, deep, circular rubbing movements), ”Tapotement” (Brisk tapping or percussive movements), Vibration (Rapidly shaking or vibrating specific muscles) which where then, as they are now, basic techniques of Tu ina and age old Chinese massage.

It may be convenient to summarize here the later history of Ling’s system of medical gymnastics. A Gymnastic Orthopedic Institute at Stockholm was founded in 1822 by Nils Akerman, and after 1827 received a government grant; and Gustaf Zander elaborated a medico-mechanical system of gymnastics, known by his name, about 1857, and started his Zander Institute at Stockholm in 1865.

At the Central Gynmastic Institute of Stockholm qualified medical men have supervised the medical department since 1864; the course is three years (one year for qualified doctors).

Broadly speaking, there have been two streams of development in the Swedish gymnastics founded on Ling’s beginnings, either in a conservative direction, making certain forms of gymnastic exercises subsidiary to the prescriptions of orthodox medical science, or else in an extremely progressive direction, making these exercises a substitute for any other treatment, and claiming them as a cure for disease by themselves.

A representative of the latter, more extreme, section was Henrik Kellgren (1837-1916), who had a special school and following.

Other variants and accounts of Dr Ling’s practice and philosophies where published: a Handbook of Medical Gymnastics (English edition, 1899), was published by Anders Wide, MD, of Stockholm representing the more conservative practice.

Henrik Kellgren’s system, which, though based on Ling’s, admittedly goes beyond it, is described in The Elements of Kellgren’s Manual Treatment (1903), by Edgar F Cyriax, who before taking the MD degree at Edinburgh had passed out of the Stockholm Institute as a gymnastic director. See also the encyclopedic work Sweden: its people and its industry: historical and statistical handbook (1904), p. 348, edited by Gustav Sundbärg for the Swedish government.