Arthur Ernst Lutze 1813 - 1870 MD was a German lay practitioner who practiced for many years as a mesmerist and homeopath before becoming an orthodox physician.

Arthur Lutze founded a homeopathic hospital in Kothen in 1855, the first Wellness Clinic in the World, and by 1864, 26,690 patients had received medical care in the outpatients’ clinic. 51,452 letters with 162,781 case reports were answered, and more than three quarters of all patients had received free treatment.

Today, Arthur Lutze’s Homeopathic Hospital has been fully retored as a historical monument, and a display of his works is on permenant display in Kothen Castle.

Since 1846, Arthur Lutze had also practiced mesmerism, and he was a high potency homeopathic prescriber, who also favoured double remedies. Lutze was a prolific propogandist for homeopathy, with his own printing department which produced many thousands of copies of homeopathic books. Arthur Lutze also sold homeopathic remedy kits by the thousands.

Although Arthur Lutze was extremely controversial, he received visits from over 75 homeopathic doctors, and his homeopathic hospital was conducted with honesty and fairness, enough to impress these visitors and receive many, many thousands of patients.

Arthur Lutze was the homeopathic practitioner of Marie Elizabeth Zakrzewska,

Arthur Lutze was a former Secretary to the Postal Service in Halbertstad and Postdam, where he had already begun to practice homeopathy before he moved to Kothen. In 1844, Arthur Lutze developed a coffee substitute made from rye, barley and sugar beet, which by 1874 was a thriving business managed and manufactured by his eldest son. Lutze’s Coffee was marketted around the World.

Supported by the Prince of Anhalt Kothen and his government, Arthur Lutze opened the homeopathic hospital in Kothen, where he focussed on treating the poor and common people. Arthur Lutze met many of the great homeopaths working at this time, and he also worked with many other lay practitioners, and practiced under the legitimacy of orthodox physicians.

The son of a consul came Lutze Consulate in Hanover. He attended the Stettin Gymnasium, and later a private school in Boleslawiec. After the loss of both parents he entered employment as a post master in 1830 as a civil servant, first in Nordhausen, where he was transferred several times.

In addition to career he was fascinated by Samuel Hahnemann’s publications on homeopathy and decided after many years of private studies, to become dedicated to this profession.

He resigned 1843 in Bad Langensalza from the postal service and held in Mühlhausen an often printed, passionate speech to Samuel Hahnemann’s death, later almost a manifesto of homeopathy…

He began his career as a medical arms at a hospital in Potsdam, where he gained practical experience by thousands of patients treated mostly for free. Absence of a medical practice in 1845 meant he was prohibited any further activity in Prussia.

In August 1846 he therefore travelled to Kothen, where he was in Duke Heinrich von Anhalt Kothen, who was an advocate of homeopathy. Lutze, therefore, moved his practice all the way to the Potsdamer Kothen, where they quickly enjoyed such success, that the city became almost a homeopathic pilgrimage. “Here lives the great miracle man who can cure all the world,” mocked a contemporary. Lutze was quite a messianic healer.

The famous portraitist William of Kugelgen aptly portrays the imposing appearance of the charismatic miracle healer, “a short compact shape with a large but beautiful and intelligent head … and a tremendous prophet beard … no deliberate fraudster, but an involuntary swindler” …

Notwithstanding the provisions of Samuel Hahnemann, Lutze used many self developed, almost modern looking diet “wellness” healing practices as well as the then fashionable Mesmer method. In his popular book _Manual of Homeopathic Theory and Practice_ (64 runs), he prohibits the use of tobacco, coffee, tea and alcoholic beverages, as well as hot spices and herbs. He opposes any kind of meat, especially when fried, and recommends a vegetarian way of life with plenty of vegetables and fruit, milk and butter.

Lutze imagined even caffeine free health coffee from malted barley, rye and sugar beets with chicory as a bitter substance found even in the 20th Century.

To medically qualify, Lutze studied in Halle (Saale), where his responsibilities included the operation of cataracts. With a dissertation De Cataracta extraction, he received his doctorate in 1848, Jena.

Together with his three sons, the tireless Lutze in Kothen founded a homeopathic clinic, and in 1854, he decided to build the hitherto 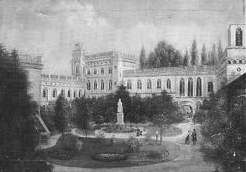 largest homeopathic clinic in the world.

Due to its immense popularity, he succeeded within a short time to finance this huge project with private donors, who gifts today are popular collector’s items.

The Homeopathic Hospital was built in the style of the Neo Renaissance and had several large wards and 72 rooms for paying private patients, a park, several baths, a library, an art gallery and an observatory.

Lutze also manufactured and shipped worldwide homeopathic drugs and vegetarian products, and distribution of printed material formed part of the company. By 1864, and with 21 assistants, 26,690 patients and 162,000 inquiries from all five continents were answered.

The orthodox physicians’ guild refused to accept Lutze from the beginning, and they tried repeatedly to close his controversial clinic. However, the clinic was open until 1914 when it closed due to WW1.

The Kothener Hahnemann House was long neglected, but the historic and magnificent building of the Lutze Clinic has recently been lavishly restored and is now open to the public. The Historical Museum in the castle offers a permanent exhibition to the works of Arthur Lutze.

Arthur Lutze’s Obituary is in the Transactions of the Homeopathic Medical Society of the State of New York in 1871, and his centenerary was also commented on in The Pacific Coast Journal of Homeopathy in 1913. 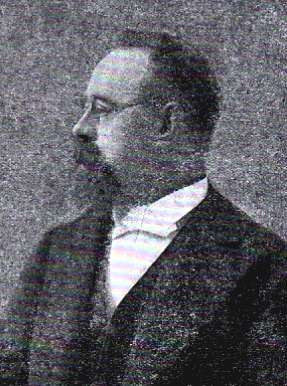 Frederick Henry Lutze of Brooklyn, New York, was born in Bevergern, Germany, August 19, 1838, son of Henry Andrew and Clara (Gott) Lutze, both natives of the kingdom of Hanover.

Frederick H. Lutze entered the town school in 1844, and studied under private receptors from 1849 to 1852. He entered the college (gymnasium) in Munster, Westphalen, September, 1852, and continued there until 1858.

He studied for his profession in the New York Homeopathic Medical College and Hospital, entering in 1879 and receiving his degree in 1882.

In September, 1882, he engaged in the practice of medicine in Brooklyn, and from 1884 to 1891 practiced on Lake Canandaigua (academy). In 1891 returned to Brooklyn, where he has since lived.

He is author of The Therapeutics of Facial and Sciatic Neuralgias, published by Boericke & Tafel, 1898. In 1872 he married (1st) Alice Leonard, and has one son living, Edson Haskell Lutze. He married (2d), Mrs. E. Haskell (born Hall).