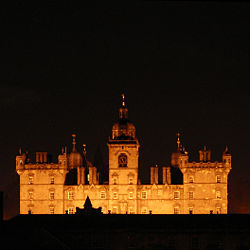 Andrew Wood was a colleague of James Young Simpson,

Andrew Wood conducted clinical trials on homeopathic belladonna at Heriot’s Hospital, and he reported his results as follows: “The plan I proposed to myself was this - viz.: whenever scarlatina appeared in any particular ward, and not till then, I immediately made inquiry, and having ascertained the boys who had previously had the fever, these I left out of the question.

“I then divided the remainder into two nearly equal sections: to one I gave one eighth of a grain of belladonna, twice a day: to the other, no belladonna was given.

“This experiment was continued for several weeks, and the reason why it was then discontinued was simply this - that a fatal case occurred in the person of a boy (J.B.) who had been taking the belladonna for nearly four weeks. Taking alarm, I resolved to discontinue the experiment.” (cited in James Warburton Begbie 1855, p 93) (see also James Young Simpson’s book on homeopathy).

Andrew Wood was somewhat ambivalent about venesection, trying to defend his allopathic colleagues but clearly in two minds about this.