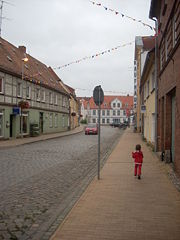 Johann Carl Ludwig Genzke 1801 - 1879 was a German vetinary surgeon who converted to homeopathy, and practiced in Butzow, and in Neustrelitz.

Genzke was an opponent of high potencies, and of Isopathy.

The first attempt at a systematic introduction of homeopathy into the  Veterinary comes from  Johann Carl Ludwig Genzke (1801-1879).

Genzke came from the Berlin Veterinary School and was the first homeopathic vet  and physician in Neustrelitz in Bützow, and later in Parchim and then in Bützow.

Originally he was a veterinarian, but apparently he also studied medicine. Genzke observed that Smany owners treat their animals homeopathically, instead of finding a veterinarian to consult.

A friend of Genzke, a homeopathic doctor, introduced him to homeopathy. Genzke studied the works of Samuel Hahnemann, which convinced him to convert his practice.

Genzke saw that allopathic cures of animals were not successful, and he believed the reason for this mainly was the fact that for treatments on animals, specific knowledge of the cure was missing, and the choice of medicine was based on the effects on humans.

In 1834, Genzke published his first essay, with twelve more to follow. There are 18 such medical works in the field of veterinary medicine, or instructions for use of specific remedies for the best homeopathic healing central to the most frequently occurring diseases of domestic and farmed animals in any published book.

In his Lectures on Homeopathic medicines from the year 1837, Genzke provides a broad overview of the general and special case descriptions of 67 homeopathic remedies in the main part of his book. The collections of the symptoms listed, and the remedies included, contain symptoms useful for human homeopathy, and Genzke accepts the conditions for situations of domestic transfer of illness from animals and vice versa, as the source indicates.

The latter is derived from various veterinary medicine teaching, or from the results of Genzke’s own experiments, on dogs, but also on horses, cattle and goats. Genzke believes that cats have great similarity to humans, as their activity is the most developed and thus more closely approximated to people.

Genzke’s appeal was due to the gaps in vetinary medicine teaching. Seeking to promote the work Genzke started, a critique of his book appeared in  the General Homeopathic newspaper…

The results of the research were analysed and discussed under different aspects. Literature was sorted through and the chosen symptoms were searched for the existence or absence of a human homeopathic reference.

Such a procedure might lead to the creation of a constantly updated remedy theory or materia medica in veterinary practice. Principles of homeopathic remedy pictures in veterinary medicine.

After the introduction of homeopathic treatment of animals at the end of the 18th century in Germany by Clemens Maria Franz Baron von Boenninghausen, interest in this type of therapy was aroused by the publications by Genzke and Guenther, both in 1837.

Genzke was a prolific author, and submitted cases and articles to various homeopathic publications.