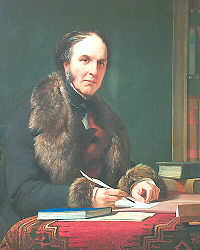 Nassau William Senior, his son Nassau John Senior, and his daughter in law Jane Elizabeth Nassau Senior ‘Jeanie Senior’ (1828-1877) were patients of James Manby Gully (as was Mary Charlotte Mair Senior Simpson), and staunch advocates of homeopathy. In his book Historical and Philosophical Essays, Nassau William Senior leads his reader in a stout defense of homeopathy.

Jane Elizabeth Nassau Senior (known as Jeanie Senior), was the sister of Thomas Hughes (who was an ardent sponsor of homeopathy),

Nassau William Senior was educated at Eton and Magdalen College, Oxford; at the university he was a private pupil of Richard Whately, afterwards archbishop of Dublin, with whom he remained connected by ties of lifelong friendship.

He took the degree of B.A. in 1811, was called to the bar in 1819, and in 1836, during the chancellorship of Lord Cottenham, was appointed a master in chancery. On the foundation of the professorship of political economy at Oxford in 1825 Senior was elected to fill the chair, which he occupied till 1830, and again from 1847 to 1852.

In 1830 he was requested by Lord Melbourne to inquire into the state of combinations and strikes, to report on the state of the law and to suggest improvements in it.

Senior was a member of the Poor Law Inquiry Commission of 1832, and of the Handloom Weavers Commission of 1837. The report of the latter, published in 1841, was drawn up by him, and he embodied in it the substance of the report he had prepared some years before on combinations and strikes.

He became a good friend of Alexis de Tocqueville (1805-1859), whom he met in 1833 for the first time before the publishing of Democracy in America.

Senior was in the spring of 1849 legal advisor and marriage counsellor to Jenny Lind, The Swedish Nightingale who then performed in London. He accompanied her and Mrs George Grote to Paris (amid civil strife and a cholera epidemic), where the marriage failed to take place.[4] Senior was “indirectly responsible for the contract which Jenny Lind condescended to sign in 1850 with the American promoter P T  Barnum“.

Senior was one of the commissioners appointed in 1864 to inquire into popular education in England. In the later years of his life, during his visits to foreign countries, he studied with much care the political and social phenomena they exhibited.

Several volumes of his journals have been published, which contain much interesting matter on these topics, though the author probably rated too highly the value of this sort of social study. Senior was for many years a frequent contributor to the Edinburgh Quarterly, London and North British Reviews, dealing in their pages with literary as well as with economic and political subjects.

This first full biography of Mrs. Nassau Senior, 1822-1877, tells how an extraordinary woman escaped from the constraints of Victorian domesticity to become the first woman in Whitehall and one of Britain’s great social reformers.

She was ferociously attacked for advocating the fostering of all pauper orphans rather than their incarceration and for indicting Workhouse ‘Barrack’ schools for producing prostitution fodder. Her fight to defend her findings against male hostility politicised her and she became an icon for the late 19th century women’s movement.

Jeanie Senior was also a significant figure in the worlds of art, music and literature, even being, it is argued here, the vital inspiration for her friend George Eliot in creating Dorothea, heroine of Middlemarch.

Her life was a great ‘human story’ as she struggled in the teeth of multiple bereavement, an unhappy marriage and cancer in order to rescue others more desperate and vulnerable still. Florence Nightingale told her she had been ‘a noble Army of one’ and later grieved that her ‘premature death was a national and irreparable loss’.