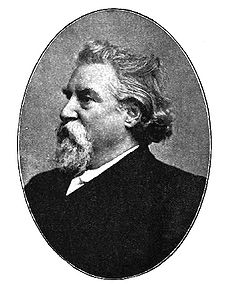 After spending eight months working with people in the worst slums of Glasgow, James Chalmers studied for two years in Cheshunt College, then stayed one year at Highgate where he took special studies, including elementary medicine in John Epps’ Homeopathic Hospital.

From http://en.wikipedia.org/wiki/James_Chalmers_(missionary) James Chalmers was born in the fishing village of Ardrishaig, Argyleshire, Scotland, the only son of an Aberdonian stonemason. The family moved to Inverary when James was seven, he went to the local school, and then to grammar school for about a year when he was 13. He then was employed in a lawyer’s office at Inverary, and before he was 20 decided to become a missionary.

In 1861, he joined the Glasgow City Mission as an evangelist. Here he met the Samoan missionary, George Turner, who suggested he apply as a missioanry candidate, and eight months later was sent by the London Missionary Society to Cheshunt College near London to carry on his studies.

He was a good student, though not a brilliant one, always ready for practical jokes, and already showing capacities for leadership. On 17 October 1865 he was married to Jane Hercus and two days later was ordained to the Christian ministry. It had been decided that he should go to the South Pacific island of Rarotonga in the Cook Islands, although he had hoped to work in Africa.

On 4 January 1866 Chalmers sailed in the missionary ship John Williams to Australia, arriving in May. After a stay of three months he left for the New Hebrides (now Vanuatu). The ship ran on an uncharted rock and had to go back to Sydney to be repaired. It sailed again and was wrecked in January, though fortunately all on board were saved. Eventually he arrived at Rarotonga on 20 May 1867.

Chalmers was initially disappointed to find the island partially christianized, but soon found there was much work to be done. There was a good deal of drunkenness to be fought, and the directing of the natives energies into wiser practices. He learned the language, did much teaching, and became personally popular, his Raratongan name was Tamate. Chalmers also produced a monthly newspaper. He gained much experience which was to be used in his later work, but he felt a strong urge to devote his life to more untutored men.

In 1877 Chalmers had his desire for pioneering work fulfilled and was sent to New Guinea, then almost an unknown land. He arrived with his wife at Port Moresby on 22 October 1877. During the next nine years he explored much of southern New Guinea, in dangerous conditions, everywhere the peace maker.

In 1885 Work and Adventure in New Guinea 1877 to 1885, written in collaboration with W. Wyatt Gill, was published in London. Next appeared Adventures in New Guinea (1886) and Pioneering in New Guinea (1887) solely by Chalmers. During a year’s leave in Great Britain in 1886-7, much interest in his work was generated.

After Chalmers’ return to New Guinea he did a great deal of exploring, and gained an detailed knowledge of much of the country and of the natives. When British New Guinea was made a colony in 1888, Chalmers and his fellow missionary, the Rev. W. G. Lawes, explained the meaning of the functions held to the chiefs. It had been decided that the colony should be governed in the best interests of the natives.

It was no doubt largely the influence of the missionaries that made the deportation of the natives illegal, and caused the introduction of intoxicants, fire arms and explosives, to be forbidden.

In 1893, Chalmers explored part of the Fly River in a steam launch, but found the natives extremely hostile. He had another furlough in 1894-5 and did much speaking in Great Britain. He also published Pioneer Life and Work in New Guinea 1877-1894 (1895), which contained a considerable amount of material from earlier books.

Back at his work in 1896, Chalmers was anxious to further explore the Fly River and established himself for some time at Saguane off the Fly River delta. His last station was Daru. In April 1900 he was joined by a young missionary, the Rev. Oliver F. Tomkins.

Chalmers’s first wife died on 20 February 1879. In 1888 he married Sarah Elizabeth Harrison, widow, who had been a childhood friend of his first wife. She died in 1900. There were no children by either marriage.