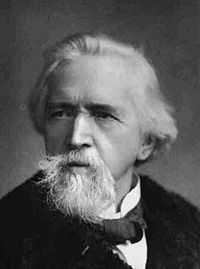 George Jacob Holyoake 1817 - 1906 was an English secularist and co-operator, was born in Birmingham, England.

George Holyoake was an advocate of homeopathy and a colleague of John Chapman and the various writers at _The Westminster Review_. Holyoake was also a student of phrenology, and an Owenite lecturer, and the President of the first day of the 1887 Co-operative Congress.

George Holyoake coined the term “secularism” in 1846 and the term “jingoism” in 1878.Holyoake was for a brief time a lecturer at the Birmingham Mechanics Institute. At a later stage he became an Owenite lecturer, and in 1841 was the last person convicted for blasphemy in a public lecture, though this had no theological character and the incriminating words were merely a reply to a question addressed to him from the body of the meeting.

He nevertheless underwent six months imprisonment, and upon his release invented the inoffensive term secularism as descriptive of his opinions, and established the Reasoner in their support. He was also the last person indicted for publishing an unstamped newspaper, but the prosecution was dropped upon the repeal of the tax.

Holyoake coined the term “jingoism” in a letter to the Daily News on 13 March 1878, referring to the use of the phrase “by Jingo” in a recent belligerently patriotic song.

His later years were chiefly devoted to the promotion of the cooperative movement among lower class workers. He served as President of the first day of the 1887 Co-operative Congress.

He wrote the history of the Rochdale Pioneers (1857), The History of Co-operation in England (1875; revised ed., 1906), and The Co-operative Movement of To-day (1891). He also published (1892) his autobiography, under the title of Sixty Years of an Agitator’s Life, and in 1905 two volumes of reminiscences, Bygones worth Remembering.

He died at Brighton on 22 January 1906, and in response the Co-operative Movement decided that a lasting monument should be built to him: a permanent home for the Co-operative Union in Manchester. Holyoake House was opened in 1911, and also houses a collection of Holyoake’s papers and publications: a second collection is also held at Bishopsgate Library.

He was the uncle of the independent MP and convicted fraudster Horatio Bottomley and contributed towards the cost of Bottomley’s upkeep after he was orphaned in 1865.