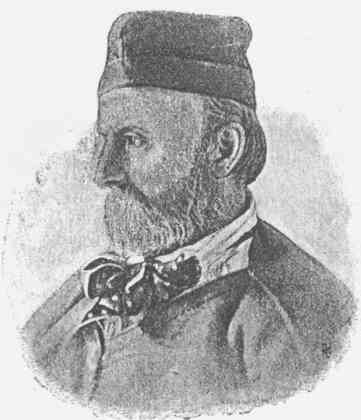 Carl Frantz Dominik von Villers 1817 - 1890 was a German othodox physician who converted to homeopathy and practiced in St. Petersberg.

Carl Frantz von Villers was a friend of Franz Liszt, a student of Samuel Hahnemann, and a colleague of Alfons Beck, Carl Bojanus, Anton von Hubbenett, Kozlov and Zdekauer.

A Mr. von Villiers, the uncle of Carl Frantz von Villers, was a Captain of the Engineer Corps in the French Army until 1792, a refugee from 1807 until his death in 1815 as a lecturer in Gottingen, was a correspondent of Samuel Hahnemann.

A nephew of a Dr. von Villers lived in Dresden and was also a homeopath (this must be Carl Frantz von Villers), and he published some letters from his uncle in Leips Pop zs fur Hom, detailing Samuel Hahnemann decision not to settle in Gottingen, but to travel instead to Leipsig.

The journal Vestnik noveishih vrachebnyh metod (The Herald of New Medical Methods) which was published in St. Petersburg in the early 1860s, published in 1862 a very interesting document deserving a special study.

The document was A program for a clear persuasion of the efficiency of the homeopathic method and of the possibility for homeopathy to be accepted as a medical art, signed by Profs. Kozlov and Zdekauer… Carl Bojanus cited the whole “Program” and the answers of homeopaths.

This program began with an unquestionable assertion: Common sense has convinced everybody that a doctor needs the two following conditions in order to successfully treat diseases:

Thus, from the very first words one can understand that Prof. Zdekauer and Kozlov, even if they wished to discuss the theme seriously, were prepared to speak with homeopaths while staying on purely allopathic soil (location of disease in the body, actions of the medicines as expected in time and effect), which, in their opinion, “represented the essence of the medical art”.

The professors were trying to get the answers to the following points:

Although the “Program” occupies 10 pages in the book of Carl Bojanus, these were mostly questions on the ability of homeopathy to treat this, that or another disease. The authors finished writing their “Program” in a way that hardly harmonized with the minor tone in which the document was written at the beginning:

Clear and tangible experiments have to prove that homeopathy possesses medical action, enabling the fulfillment […] of the aims […] subordinated in time and power to the will of the doctor […]. Only in this way would one achieve the conviction that homeopathy may be permitted, together with rational medicine, for the good of mankind.

Otherwise, it should be decided that homeopathic treatment of diseases, provided not only by laypeople but also by doctors, is a public evil, should be prohibited. Four homeopathic physicians, Anton von Hubbenett, Carl Bojanus, Alfons Beck and Carl Frantz von Villers reacted to the “Program” in Zhurnal gomeopaticheskogo lecheniia…

“I shall limit myself to several central points in those answers. All the homeopaths stressed that the authors of the “Program” had no intention to discuss homeopathy on the grounds of homeopathic theory and practice; instead of that they proposed carrying out only those experiments which are acceptable for the allopathic school.

“Every experiment arranged outside the homeopathic doctrine […] has been a priori deficient and has no significance. In order to support a scientific denial of homeopathy from experiments, one should base this denial on homeopathic experiments. Otherwise, this [denial] cannot be considered fair.”

They also pointed out that it is not a secret that allopathic and homeopathic methods of diagnosis and treatment are different; it is not clear what the professors expected from homeopathy, whereas even within allopathy there was no full fledged unity in the treatment of various diseases, whilst the polypharmacy had become the most serious problem of allopathy.

Alfons Beck, whose answer was the most detailed, argued that although the exact definition of a disease’s location has been difficult for homeopathy as well as for allopathy, this does not create an obstacle to a successful homeopathic treatment, while for allopathy the lack of localization is an insuperable barrier.

He also proposed an experiment to prove the effect of homeopathic medicines on healthy persons according to Samuel Hahnemann’s method. One could moreover establish a homeopathic hospital, in which a committee of allopathic doctors might be observers and make judgments without being involved in the treatment.

Other homeopaths proposed nothing but only answered the questions. No development of the discussion followed.

As to the results of this discussion, Carl Bojanus wrote in 1882: “Twenty years will be too short for homeopaths to obtain a reaction […] to their answers and proposals. Why the discussion was proposed [by allopaths] at all? We leave this question open…

Alexander von Villers - 1907 MD, the son of Carl Frantz von Villers, was an German orthodox physician who converted to homeopathy, associated with the British Homeopathic Society in 1898. His name is often mispelt as Villiers.

In 1891, Alexander von Villers was Editor of the Homeopathique Zeitung, and he spoke at the Fourth Quinquennial Session of the International Homeopathic Congress, held at Atlantic City, N.J., U.S.A., June 16 to 22, 1891.

Alexander von Villers was present in 1898 when Samuel Hahnemann’s body was disinterred from his tomb, for reburial under a more suitable memorial at the Cemetery of Pere Lachaise. Francois Cartier was Secretary to the Sub Committee in Charge of Samuel Hahnemann’s tomb, alongside Brasol, Richard Hughes, Bushrod James and Villers.

Alexander von Villers Obituary is in The North American Journal of Homeopathy in 1907.

NB: A Saxon Diplomat also named Alexander Heinrich von Villers 1812 - 1880 was associated with Gottfried Keller, who was also a friend of Franz Liszt, and a brother of Carl Frantz Domink von Villers.

Alexander Heinrich von Villers lived in Leipzig, from a French immigrant family. His family subsequently moved to Dresden, and he met Franz Liszt in Paris, and they travelled together and Franz Liszt encouraged him to take become a music teacher, and he later took a law degree. Alexander Heinrich von Villers subsequently became a diplomat in Berlin.

Another Alexander von Villers was present at the crusades with Philip II of France.