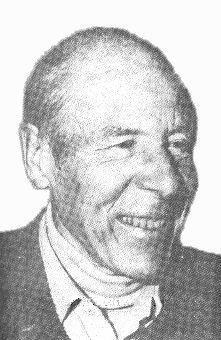 Jost Kunzli von Fimmelsberg 1915 - 1992 was a Swiss orthodox physician and gynaecologist, who converted to homeopathy, as his father and his grandfather were already homeopathic doctors.

Kunzli was a teacher of homeopathy who revitalised homeopathy for the 21st Century, and he is one of the homeopaths responsible for the introduction of Q potencies and for training a great many of the nearly 4000 successful homeopaths registered in Germany today.

Kunzli also produced Kent’s Repertorium Generale, which is so influential today, based on Kent’s Repertory and incorporating updates from 71 other important sources, reorganised and superbly efficient. Kunzli is also noted to have used black dots to indicate confirmed rubrics and remedies.

Kunzli was a student of Pierre Schmidt, and he subsequently went on to teach homeopathy in German speaking Switzerland.

Kunzli and Pierre Schmidt were pioneers of the rediscovered Q potencies in homeopathy, and in 1947, they began their manufacture, starting with Sulphur, the Schmidt Nagel Laboratory is still manufacturing these remedies today.

The first homeopath to discover the changes in the sixth edition of the _Organon_ was the Swiss Rudolf Flury, who began to manufacture Q-potencies right from 1942, just 100 years upon the completion of the manuscript of the 6th _Organon_.

It is obviously also him who invented the term “LM potencies”. Rudolf Flury communicated his discovery to his compatriot Charles Pahud, who introduced the Q-potencies in the French speaking countries and also inspired Adolf Voegeli to prepare and prescribe Q-potencies.

Concurrently, Pierre Schmidt and his follower Jost Kunzli discovered the new prescriptions for preparing medicines in the 6th _Organon_ and began to produce all so called antipsoric remedies in the form of Q-potencies from 1949 onwards.

Another Swiss homeopath must be mentioned in the context of the rediscovery of the Q-potencies for homeopathic use: Jost Kunzli von Fimmelsberg. He came from a doctors’ family in St. Gallen that had produced three generations of homoeopathy supporters.

In 1946, he learned from Pierre Schmidt about the Kentian approach to homeopathy. In 1947, he settled down in St. Gallen where he offered training courses for prospective homoeopaths. His courses on homeopathy on the North Sea island of Spiekeroog made him an influential teacher in Germany.

In 1973, Kunzli translated James Tyler Kent’s textbook Lectures on Homeopathic Philosophy into German. Almost two decades before that, he had helped Pierre Schmidt with his French translation of the 6th edition of the Organon.

It was then that he had discovered the mysterious §270. From 1949 he began, partly in collabora tion with his teacher, to produce and use Q-potencies of antipsoric remedies, an experience which led him to pronounce the following positive verdict in 1956:

“I cannot get myself to see the quinqua-millesimal potencies merely as a historical curiosity, because I am convinced that they have certain advantages. As soon as I can look back over about ten years of experience I will happily share it.”

He did this, in fact, much sooner: in 1960. In a contribution to the Zeitschrift für Klassische Homöopathie Kunzli writes at length about the manufacture and use of the Q-potencies. He starts by describing the manufacturing process in detail following the in- structions in §270 of the 6th edition, which he had helped to trans late into French. And he adds his own practical therapeutic experi ences:

“Add one globule of the chosen potency – usually beginning with Q 1 – to some milk sugar in a paper capsule. Then fill a 150cc vial (10 tablespoons) to approx. 8/10 with tap water (if not chlorin ated!) and add approx. 1/10 wine spirit (95% alcohol) so that the water will keep longer.

“Ask the patient to take both items home. At home,the patient has to crush the small globule into the milk sugar, using,for example, a knife handle, and then pour the entire content of the capsule into the vial. This makes the stock from which the individual dosages are taken. […]

“In cases of chronic disease it is sufficient to take the remedy every second evening before going to bed. The patient has to take the vial into one hand and shake it ten times vigorously against the palm of the other hand. In this way the stock is each time dynamized to a higher scale. […]

“Once this has happened one tablespoon of the stock is stirred into a glass of fresh water.The glass should have about the same size as the vial with the stock. Once the spoonful of stock has been thoroughly mixed with the water, the patient takes one small tea spoon full (= 5ccm). The rest of the liquid in the glass is discarded and the glass thoroughly cleaned.

This procedure is very similar to the one described by Pierre Schmidt. It is also remarkable that Kunzli increases the Q potency encies by two stages when treating chronically ill patients. Other application methods, such as giving one globule onto the tongue, are also mentioned in this contribution to a homeopathic journal which saw itself as the mouthpiece of the “classical”approach.

20 years later, Kunzli no longer had any reason to complain about the homeopaths’ lack of interest in Samuel Hahnemann’s new dy namizing technique, on the contrary: When introducing the new English translation of the 6th edition of the _Organon_ at the 1981 Liga Congress in Rome he said:

“In France and Germany practitioners, skilled and unskilled alike, adopted the 50 millesimals with fervour. Manufacturers, both qualified and unqualified, began to sell them, and now the world is awash in them.”

In 1989, Kunzli commented for the last time on the Q-potencies. In an essay for the Zeitschrift für Klassische Homöopathie he wondered whether Samuel Hahnemann had been inspired by Constantine Hering to experiment with the new potentisation…

In the mid-1960s, the Q -potencies had clearly ceased to be only a topic for a small circle of homeopaths keen on experimenting. On April 10, 1965 – Samuel Hahnemann’s 210th birthday – the Bavarian branch of the Zentralverein homöopathischer Ärzte in Germany held a meeting in which focused mainly on Q -potencies. Among the speakers were – apart from the aforementioned protagonists Mathias Dorcsi, Laudenberg, Kunzli and Otto Eichelberger – Georg von Keller (1919–2003) from Tübingen and Martin Stubler (1915–1989), second chairman of the German central association of homeopathic physicians from 1960 to 1975 and many others…

Kunzli was born in St. Gallen. His father and grandfather were already homeopathic doctors. In 1934-1941, he studied medicine in Zurich, Berlin, Kiel and Paris, and between 1941-1945, he worked in a hospital in Bern.

Kunzli learnt his homeopathy from the books of James Tyler Kent, in St. Gallen in 1947, and between 1957-1973, he was the co-editor of the Journal of Classical Homeopathy.

Beginning in 1962 he began teaching Repertorisation Theory in St. Gallen, and in 1971 he was teaching in Frankfurt. Bewteen 1973-1986 he taught an annual Course in Spiekeroog, and he also taught homeopathic courses since 1977 in three year cycles in the premises of the University of Zurich.

Jost Kunzli Fimmelsberg and his mentor Pierre Schmidt caused a Hahnemann renaissance in German speaking world after WWII. Kunzli’s school of homeopathy became (most influential)… (and the University of Zurich continues to teach homeopathy in this tradition).