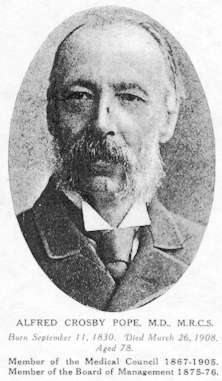 Alfred Crosby Pope 1830 - 1908 MD St. Andrews 1847, MRCSE England, was an orthodox physician who converted to homeopathy, to become a Physician at the Manchester Homeopathic Hospital, Surgeon at the St. James Homeopathic Hospital Doncaster, General Secretary and Treasurer of the Northern Homeopathic Medical Association, Medical Officer at the Blackhealth Homeopathic Dispensary, and a Fellow of the British Homeopathic Society,

Alfred Pope was active in homeopathic politics, and was the Co Editor of The Monthly Homeopathic Review alongside William Bayes, and John Ryan.

Alfred Pope was awarded a MD from the Homeopathic Medical College of Pennsylvania in 1852, and he was a Lecturer in Materia Medica at the London School of Homeopathy (later merged with the London Homeopathic Hospital), and he was President Elect (Anon, The British Homoeopathic Review, Volume 20, (1876)) of the British Homeopathic Congress in 1876 and in 1877, and a staunch defender of homeopathy for over forty years.

Homeopathy had many converts in Scotland at this time, including Francis Black, Samuel Cockburn, Robert Ellis Dudgeon, Adam Lyschinski, William MacDonald, William MacLeod, Charles Ransford, John Rutherford Russell, Thomas Skinner, George E Stewart, John Stuart Sutherland, Dionysius Wielobycki, and many others. By 1851, 8 out of 48 graduates from the University of Edinburgh were homeopaths, including Alfred Crosby Pope.

George Stevenson Knowles converted to homeopathy in 1851 as a direct result of the attacks on his close friend Alfred Pope.

In 1851, Alfred Pope was refused his MD degree from his Alma Mater, the University of Edinburgh, due to his conversion to homeopathy, which radicalised him for the rest of his life.

However, due to national outcry (many hundreds of physicians and surgeons - 26 being graduates of the University of Edinburgh - 191 clergymen - including Alfred’s father - 47 Magistrates and 67 military and naval officers all signed a petition against this outrage!), many people signed this petition including Lord Lindsay (Henry Lindsay 9th Earl of Lindsay 1787-1851 or possibly his son John Trotter Lindsay 10th Earl of Lindsay 1827 - 1894), John Rutherford Russell,

Due to this international outrage, and the efforts of The British Homeopathic Association, he was awarded a degree from the Homeopathic Medical College of Pennsylvania in 1852.

William Hamilton 9th Baronet, Professor of Logic at the University of Edinburgh came out to support Alfred Pope, and eventually, he was awarded his degree.

In 1866, Pope conducted clinical trials of  the treatment of cattle plague with homeopathic remedies, claiming up to 50% recovery rates with arsenicum, belladonna, phosphorus, rhus tox and turpentine.

The Times wrote an article wishing the homeopaths success in these homeopathic trials, but they also made a pithy comment that the allopaths would probably rather see all the cattle die than have homeopathy proved successfull (written by Marmaduke Blake Sampson City Correspondent for The Times from 1846 - 1871?).

Alfred Pope was a Surgeon at the York Homeopathic Dispensary, and he practiced in Grantham, in Tunbridge Wells, in Tring in Hertfordshire, and in Kent.

Alfred Pope attended the International Homeopathic Congress, in Atlantic City in 1891, and the World’s Congress of Homeopathic Physicians and Surgeons in 1893 (http://archive.org/details/transactionsofwo00inte).

Volume II, The History of Homeopathy, contains contributions both foreign and domestic. Appropriately enough, the first section is a 90 page history of homeopathy in Germany 1794-1875, including statistics about certain hospitals and dispensaries, written by Carl Gustav Puhlmann and Clotar Mueller. This is followed by an historical and statistical report on homeopathy in the United Kingdom, specifically Great Britain and Ireland, each section written by a different member of the British Homeopathic Society: C. B. Kerr, Herbert Nankiveli, Richard Hughes, Alfred Crosby Pope and William Bayes.

Alfred Pope’s Obituary is in the Transactions of the Homeopathic Medical Society of the State of New York in 1908. He was the eldest son of Rev. Alfred Pope.

Alfred Pope wrote a long article detailing the Enquiry into the Pathology and Treatment of the Cattle Plague, detailing the involvement of George Jones Emerton and C J Dring (homeopathic Vetinary Surgeons), and he also wrote Ethical Impediments to the progress of Homeopathy throughout the Profession, Landmarks of progress in the history of homœopathy during eighteen hundred and sixty nine, The Scientific Basis of Homeopathy, Notes on the Position and Progress of Homeopathy in the United States of America, The homeopathic system of medicine, The drift of modern medicine, Who is a Homeopathician?, A Medical Handbook for Mothers, Scarlett Fever, Observations of the Physiological and Therapeutic Effects of Alcohol, The Cattle Plague in York, and he contributed a great many cases and numerous articles to various homeopathic publications.

H Pope Jnr was a Physician at the Manchester Homeopathic Hospital in 1851.