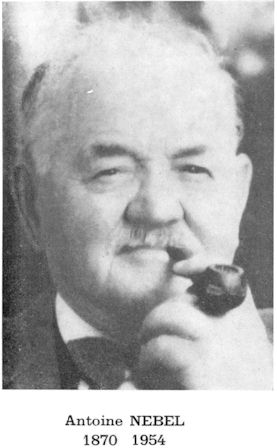 Antoine Nebel 1870 - 1954 was a Swiss orthodox physician who converted to homeopathy to become an honoured practitioner, receiving a medal issued by the Societe Rhodanienne d’Homeopathie, and one of the strongest personalities of the world of homeopathy with an international reputation.

Nebel is credited with creating the concept of homeopathic drainage, as he spread knowledge of Johann Gottfried Rademacher’s techniques, and Nebel was also a proponent of detoxification with homeopathic remedies.

Nebel is also credited with the remedy Tuberculinum Residuum, and he ran a Tuberculosis sanitorium in the Swiss Alps. 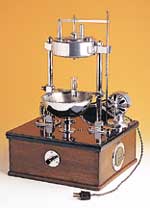 Nebel’s Machine for Korsakoff Potentization (inventor Simon Korsakoff): This device was produced in the early 20th century in consultation with Antoine Nebel, a homeopath in Lausanne, Switzerland. Homeopathic dilutions consist in a series of successive deconcentrations of the mother tincture, or the trituration of the insoluble mineral substance.

Nebel was the first to advise Alexander Marmorek’s antituberculous serum in medium homeopathic doses. For five years, Leon Vannier, upon the advice of Nebel, has employed this dilute serum, and he has been able to collect 530 observations grouped by him into two categories, the tuberculinics (those predisposed), and the tuberculous.

Leon Vannier places in connection with the group of tuberculinics certain conditions which, by a few modern authors, would be considered prodromes of tuberculosis, a classification which suggests the similarity between tuberculinics and the pre-tuberculous or good subjects for tuberculosis… The tuberculin of Denys Cochin in high dilution is also used by Nebel, Leon Vannier, Paul Chiron, and others.

Antoine Nebel is indisputably one of the strongest personalities of the world homoeopathique. Follower of the doctrine of Samuel Hahnemann for nearly forty years, he was, so to speak, a center of attraction for homoeopathy of all countries to which he has delivered his ideas.

His scientific work, his knowledge of six languages, its clinical value, safety of its diagnosis, its high culture, gave to homeopaths considerable authority. Who does not know the originality of his work?  What homoeopath  has appreciated the clarity of his mind and logic of its conclusions?

Subsequently, he studied the action of diluted tuberculin, which he courageously experience in itself. He showed how the parasite which he attributes the origin of cancer. He managed to establish the theory became famous in the drainage pipe or by studying the regression of tumors under the influence of the homeopathic remedies.

But it is the medical field, so important, that he left his imprint, not only enriching homeopathy with many remedies, but he made his living by his conception of evolution in three directions, representing three types fluorica, opening the study of kinship remedies where his genius for observation each day creative work.

We should add that Dr. Antoine Nebel had that simplicity and goodness that are the hallmarks of great souls? Those who called on him to recall the warm welcome they have found with him… Nebel’s disciples were Daniel, Henry Duprat, Heurtault, Jean Jarricot, Charles Pahud, Quenot, Rouy, and Vidouze…

Henry Duprat writes of Nebel: “After my first three years of practice in France, during which I had the immense privilege of being introduced to homeopathy, I came, from the single doctor who practiced this method, move to Geneva not without having to go back to my session examination and made a second doctorate.

“I already knew the existence of Dr A. Nebel as homeopathic doctor, but I had barely opened my cabinet genevois before I heard a lot about him. He had moved to Lausanne and his reputation for healing was already widespread in Switzerland.

“Dr Nebel had started as a practitioner, but still ignorant of homeopathy, in the canton of St. Gallen where very penetrated resource “nature medication”, he immediately showed his preference for herbal and botanical knowledge, and he searched along the paths in the woods and the main elements of its therapy.

“Then he got to know Dr. Grubenman, renowned homeopathic practitioner of St. Gallen, who revealed to him the mysteries of our doctrine and our technique. Nebel sought out our distinguished colleague and his “conversion” was not slow to come and first to bear fruit in Switzerland, under the masterly direction of the illustrious Dr. Beck, Monthey (Valais), whose talent shines very bright in the history of Swiss homeopathy.

“Installed first in Montreux where, very quickly, the Customers poured into his office, and for good reason, Dr. Nebel already keenly interested in the field of tuberculosis left the canton of Vaud to undertake management of homeopathic sanatorium in Davos. But the limits imposed by this specialization could only disappoint his insatiable curiosity medical.

“He left for Davos and settled finally in Lausanne.  Of course, early in my practice in Geneva, I was very anxious to know him, and we met on the dock to the station Cornavin where I  expected to implore his bedside lights for one of my patients. Our relations were soon very close and particularly cordial.

“How I remember those frequent “weekend”, in Lausanne, where in his home, his wife and his three sons, who I was soon to consider as dear nephews.  And so smiling and affectionate was the mother of these children!

“Frequently other colleagues joined us in these meetings Sunday and Jean Pierre Gallavardin became one of the most faithful. He devoted a very high esteem and great friendship to Dr. Nebel.  Later, Jean Pierre Gallavardin made an extended stay with our friend for the documentation of a precise and orderly study, and to make a written statement of his creative work in the field and especially in pathological homeopathic therapeutics.

“Indeed, Dr. Nebel, overloaded with clients and employing his few leisure professionals to study and research laboratory did, rarely time to write.  Unfortunately, a cruel and stupid fate stopped this precious achievement.

“It was therefore one of our first encounters when Jean Pierre Gallavardin begged me to accept the co-writing of a collaborative French speaking Switzerland, and in the dissemination and the defense of our doctrine.  We then benefitted from the great influence of Pierre Jousset, remarkable clinician, pathologist but perhaps a therapist. Very clearly indeed, he taught homeopathy, that codified our treatments as much as nosological diagnosis after the patient’s individual need.  It must be recognized that Pierre Jousset provided a testimony of value to the teaching of the founder of our School. He also allowed the infinitesimale 30th dilution.

“And that these two views, individual and high infinitesime, that the French Society, almost completely under Pierre Jousset, saw conflicts.  I will never forget meeting of some 1909 attended by several members of the corresponding Company: Jean Pierre Gallavardin, Nebel, myself, during which Leon Vannier, then great admirer and defender of Nebel, spoke of a very high dilution which had a remarkable result in a case of asthma. A similar statement appeared a scandal in the eyes of Pierre Jousset and the majority of the Company.

“Of course, we replicated these potency studies, as did Nebel, Jean Pierre Gallavardin, Leon Vannier, and myself.  In this session we came occasionally to talk about fibroids, a condition condidered outside of our therapeutic possibilities!  Dr Nebel could not refrain from expressing his astonishment to hear such a statement in the mouth of a homeopathic doctor.

“We were a few French speaking countries, France and Switzerland, to feel the need not consent to such a narrowing of the homeopathic art  based on respect for principles Hahnemannian without neglecting, of course, any other suggestions of enrich them.  Thus, Dr. Nebel and Jean Pierre Gallavardin resolved the creation in Switzerland a distant echo of the first Gallican Society.  We gave this the title of Homeopaths Society of Physicians of South East of France and French speaking Switzerland.

“The Company was initially a small group, consisting of the first meetings of a dozen members: Antoine Nebel, Jean Pierre Gallavardin,  D ‘Espiney and Vadon, Lyon, Gailhard, Marseille, Leon Vannier and Paul Chiron, Paris, Arnulphy, Nice,  and myself. From these initial meetings Dr Nebel gradually reveals his personal acquisitions: tuberculin mineral constitutions, and his constant teaching of these valuable ideas which led Leon Vannier to continue these studies.

“Moreover, Dr. Nebel was assisting us to build what he called the family tree of our major substantive remedies, whose clinical pictures enriched by him, the pathogenesis of our remedies.  The value of the contributions to our therapy by Dr Nebel cannot be challenged. As an excellent Jean Jarricot, in his account of the recent work of our Vice President , Dr. Rouy, our Master Hahnemann’s legacy in his discoveries and teaching the “seeds of future harvests.  It is the duty of his disciples to grow these seeds, which have Nebel has largely contributed.

“I can not refrain from mentioning here, in this regard, an article by my colleague from Geneva, Pierre Schmidt, whose article was published Spanish translation, a few days of the death of our founder, in the newspaper Homeopathia which is the journal of the Medical Association Homoeopathique Argentina. That Pierre Schmidt would allow me to revert to more of the assessments made in that article where it said the “autocratic opinions” of Dr. Nebel would not be autocratic to say strongly and repeatedly, when it arises from a wide experience and constant and is approved by the logic.”

A description of Antoine Nebel’s work on Blood microbes Pleomorphismus Other building blocks of knowledge on microbial Pleomorphismus was written by von Karl Windstosser in 1994.

Nebel and other homeopaths focused on the role that microbes play in the development of diseases. They discovered that pathogenic microbes could be combated, and illnesses eliminated, using isopathic or isopathic homeopathic remedies.

From 1910 to 1920 Nebel reported on the treatment of incurable cancer patients with a vaccine, which is practically identical with the Schmidt vaccine, in his book Les cycles dévolution des Parasites du cancre humain, which represents the results of twenty years of research. He observed that when he combined the micrococcus Doyen with Mucor racemosus..

H Nebel was an American homeopath in 1900.