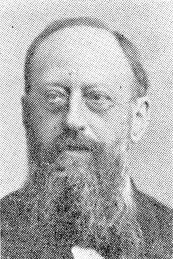 Prosper Schepens 1836 - 1908 was a Belgian orthodox physician who converted to homeopathy to become the President of the Homeopathic Medical Circle of Flanders (1903-1908), which celebrated its presidency in the 150th anniversary of the birth of SFCH (April 16 1905).

Prosper Schepens attended the London Congress of Homeopathy in 1896.

During the year 1871, returning by train after a lesson at the clinic of Gottlieb Heinrich Georg Jahr, Rue de Laeken, in Brussels, some physicians of Flanders decides to found in Gent a Homeopathic Medical Society where, like in the Society of Allopathic Medicine, the physicians homeopaths of the two Flanders would meet, would communicate themselves their interesting cases and by reciprocal advises, would learn mutually.

This idea was a proposition of doctor De Keghel. Doctors Van Ootegem, Prosper Schepens, Lados and De Keghel take part in this decision. Each of them assigned to warn, one or the other colleague of Gent and the other localities of the two Flanders, of the date agreed for one first meeting dedicated to the constitution of the new Society. Doctors Dumont, Stockman, Van den Neucker, Pierre Joseph De Moor, Van Ootegem, P., Schepens, Lados, Van Peene and De Keghel attends this meeting.

Auguste Schepens is mentioned in The Directory of Homeopathic Physicians, practicing at Rue de Moulins, 30 Mouscron in 1925.

Christian Schepens is the current holder of the cameo portrait of Samuel Hahnemann by Woltreck.

Edouard Schepens was also Vice President of the LIGA MEDICORUM HOMOEOPATHICA INTERNATIONALIS (LMHI) for Belgium between 1946-1975:

In 1952, doctors Caulier, Rene Paturiaux, Edgard Delestinne and Edouard Schepens have the idea to establish a Belgian school of homeopathy. Every year, there are more and more physicians who want some information on the homeopathic doctrine and follow a formation.

To answer the demand, the Belgian school of homeopathy has been created as educational follow up of the Belgian homeopathic Society. In 1953, the first cycle of a length of three years is organised. The private initiatives continue.

**Louis Schepens **is mentioned as a homeopath in The journal of the British Homeopathic Society in 1898, and in the The Homeopathic World in 1896.

After 50 years of medical practice, I have widened my horizon and am interested in any method that can relieve a patient’s suffering. Be it an official or a parallel therapy. If Homeopathy is more and more successful it is because of the many failures in official medicine (Allopathy), especially regarding chronic diseases.

Certain patients who are intoxicated by all sorts of drugs, consult the homeopath in search of cure. The homeopath believes that the general symptoms incriminated by experimental intoxication are the same as those manifested by the sick person, and they therefore prescribe the same medecine to obtain the cure. It is the methode of “similars”.

For example when a patient who has not been intoxicated by Belladonna presents the same symptoms of intoxication, Belladonna is prescribed by the homeopath. What is to be thought of Homeopathy?

If we have not studied and experimented it sufficiently, it is illogical to criticise it. Prejudice is the practitioner’s greatest enemy. To study Homeopathy is extremely arduous and requires daily study, because for Homeopathy even more than any other medical method: “One must study every day, because one forgets every day”.