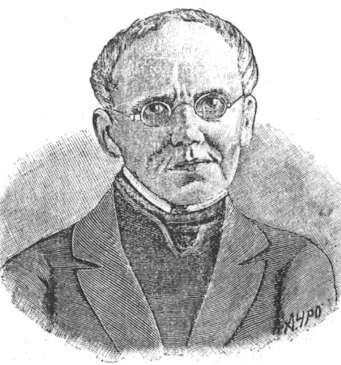 Simon Nicolaievitch von Korsakoff, General Count Iseman von Korsakoff, Semen or Simjon Korsakoff, Korsakov, 1788 - 1853 was a Russian government official, noted both as a lay homeopath and an inventor who was involved with an early version of information technology.

Korsakoff was responsible for preparing the homeopathic remedies for Tsar Nicholas I when he was travelling, and he was the first homeopath in Russia, and a disciple and correspondent of Samuel Hahnemann.

Korsakoff also invented the Korsakoff dynamiser when he was given the task of preparing Tsar Nicholas I’s remedies for him whilst travelling, and Korsakoff is credited with the discovery of high potencies in homeopathy.

In 1850, Korsakoff was also credited with the concept that dry globules of homeopathic remedies can potentise unmedicated globules.

Korsakoff’s name is inscribed on the Laurel Leaf Crown of Samuel Hahnemann’s Bust.

Korsakoff also invented one of the very first punched card machines for information processing in 1832.

Korsakoff [invented one of the very first computers for

information processing in 1832](http://books.google.com/books?id=FFDvJTO9leIC&pg=PA49&dq=Korsakoff+homeopath&lr=&ei=KL3ESeenO5uEygTB0rnbDQ#PPA12,M1), and he also wrote a book on artificial intelligence in the same year. Korsakoff worked at the Statistical Department of the Russian Ministry of Police, and he announced independantly of, and before, Charles Babbage in England, his punched card based apparatus for ‘the comparison of ideas’. Korsakoff did not apply for patent, rather he offered his machines for public usage.

Korsakoff fought in the war against Napoleon Bonaparte, and he entered Paris with the Russian army. Later, he received a position at the Russian Police Ministry in St Petersberg, in the Statistics Department. He was an Official for Special Ministry Errands, and awarded the Order of St. Anna (2nd Grade), the Order of St. Vladimir (4th Grage with ribbon), and he was a Knight of the Prussian Order for ‘distinguished merit’.

On his retirement, Korsakoff moved to his village Tarusowo near Moscow, where he began agricultural experiments. His home archive contained articles on gemoetry, statistics, short hand writing, and drawings of his invented machines and devices. Korsakoff established the first information point in Moscow, ‘The Reference Point’.

High potency remedies were first produced in the 1830s. Though Samuel Hahnemann wished to see 30c as standard potency in homeopathy, the majority of his contemporaries preferred tinctures and 3x, while others, like Caspar Julius Jenichen, General Korsakoff and Dr N Schreter [1803-1864], were busy raising potency to heights beyond his wildest dreams.

Such high potencies could not be made by traditional methods, but required succussion without dilution (Caspar Julius Jenichen), higher dilution factors (LM potencies are diluted by a factor of 50,000), or machines which integrate dilution and succussion into a continuous process (Korsakoff).

General Korsakoff, the Russian, 1829, in Archiv of Hom Med addressed a letter to Samuel Hahnemann recommending tubes or phials for remedies, suggesting globules of lactose and moistened with 2-3 drops of liquid potency.

He was in communication with Hahnemann and he was one of the great land owners who exercised medicine on the outskirts of Moscow. He got interested in Homeopathy in 1829 and created a new method of preparation of the homeopathic medicines, utilizing just one bottle.

Korsakoff, was a noble landed proprietor living in the neighborhood of Moscow, who became interested in Homoeopathy before 1829. It is likely that he was the first Russian convert.

In June 1831, he sent to the Archiv. of John Ernst Stapf one paper entitled: Experiences on the Propagation of the Medicinal Power of Homeopathic remedies. Together with some Ideas of the mode on which this propagation takes place. This was in regard to a new method of medicating pellets; he advocated placing one dry medicating pellet with a great number of unmedicated pellets in a vial, and said that the one medicated peilet would medicate all the others.

Samuel Hahnemann follows with a paper on the subject.

Samuel Hahnemann was a friend and wrote to Korsakoff and in a measure approved of his ideas.

Of course there was a branch of the Homeopathic School who did not put faith in the ideas Korsakoff originated.

Mathias Roth, in an article on Samuel Hahnemann’s Merits, Errors and critics, published in 1872 in the British Journal of Homeopathy, says: “This unhappy and mystic idea of a dematerialisation of the medicines, and of the transmutation of a material medical substance into an immaterial medicinal spirit, which has proved the greatest impediment to the rational development of Homeopathy, unhappily suggested to a layman, a Russian, Count Korsakoff, the notion of infecting 1000 unmedicated sugar globules previously moistened with the 300th part of one drop of the 100th dilution of a medicine; this was the mischievous commencement of the disgraceful high potencies, although, according to Viet Meyer (A. H. Z., vol. 58, P- .57), Samuel Hahnemann was satisfied with the 30th dilution, and did not approve of the higher dilution. Once this (diluting) must have an end, and cannot. continue into the infinite.”

Carl Bojanus says that Admiral Mordwinoff, not only an able officer, but a man of high literary and scientific attainments, writes thus to Korsakoff, another disciple of Samuel Hahnemann: “While the cholera is slaying its victims here (St. Petersburg), the new and old schools are quarrelling; the physicians, superior by position and number, put everything at stake, in order to destroy the results of the former (new school).

”Christian Theodore Herrmann writes to me that he had to give up the treatment of cholera patients in the hospital, for all those who were sent to him were dying, and had already gone through the whole course of allopathic treatment. All methods are admissible here, only Homeopathy is persistently (useful).”

Korsakoff was probably the earliest convert (in Russia), for he wrote to Samuel Hahnemann in 1829, in regard to a new method of rnediciating homeopathic pellets, which suggests some previous study of and acquaintance with the subject.

Although no physician, Korsakoff has perhaps done more than any one else to prepare a safe foundation for Homeopathy in Russia. He went much farther than an amateur; he studied, tried, examined, and succeeded in making discoveries in which no one before him had thought, not even the Master himself, then living.

That Samuel Hahnemann esteemed him highly is proven by a letter found amongst Korsakoff’s papers, in which the venerable Master says: “I admire the zeal with which you devote yourself to the beneficial healing art, not only in order to have help for your own family and neighbors, but also to penetrate the secrets of nature, as proved by your valuable notes.

“I like one of your last suggestions, handed to my nephew, to decide on the suitable remedy by the test of smelling it. I have myself seen experiments confirmed. With my utmost power I try above all things to find out what will be of most use to my fellow men. I take this for the best road, in which the happiness of us mortals during this short life is to be found, and I am convinced that you also are of this opinion.

“Continue an activity which satisfies a feeling heart and do not relax. This is my desire, to enjoy your favor. Your most devoted, Samuel Hahnemann.”

From other papers we learn that Korsakoff had occupied himself with medicine before his conversion to Homeopathy. He left five books containing 302 copies of allopathic prescriptions, and the particulars of cases treated up to June, 1828. From February, 1829, another journal of homeopathic treatment of family and dependents, continued till 1834. records 11,725 cases. From that time he seems to have made no record of cases, though he continued to administer as before to the sick on his estate, giving their claims at all times precedence of other affairs.

He was an active and efficient propagandist, and his literary productions bear the stamp of an eminently original and thoughtful mind. In the cholera years 1830 and 1847, Korsakoff was elected by the nobility, district inspector. From this appointment, we derive notes on the character of the cholera in Orenburg; of its treatment in Kasan by Arnhold, and in Pensa by Peterson; its course in different European countries, also the results of homeopathic treatment of cholera in the old Catharine Hospital, under the management of Dr. Goldberg, showing that out of 1,274 cases in 1841-4 the mortality was but 6 per cent.

To facilitate the selection of a remedy by some general classification, Korsakoff studied and recorded the mode of action of animal, vegetable and mineral substances, alkalies and acids, on different parts of the body. This work, though it bears the stamp of Laymanship, gives some valuable hints.

When Korsakoff died, in 1853, he had labored faithfully and successfully for twenty six years for the advancement of Homeopathy. As originator of the high potencies, he did a great service to the cause of Science, and it cannot be denied that he proved the efficacy of certain substances in a degree of attenuation far beyond all conceivable limits.

Simon Korsakov was born in 1787 in Kherson, Ukraine (then part of the Russian empire). His father was a military engineer. The family had migrated from Lithuania in the 14th century. He was married to Sofia Mordvinova and they had four daughters and six sons, one of whom, Mikhail Semyonovich, became famous in his own right as governor general of Eastern Siberia and was the namesake of the town of Korsakov in Sakhalin Oblast and several Russian geological features.

Korsakov died in 1853 in the village of Tarusa, then part of the Moscow Province.

Though Korsakov was not formally trained as a doctor, he was interested in medicine, possibly because of the difficulty in getting medical care in the rural area where he lived. According to his journals he treated several thousand patients, at first using conventional medicine, but in 1829 switching to homeopathy at the urging of his relatives.

Korsakov is noted in homeopathic circles as the originator of the Korsakovian method of dilution, which differed from the Hahnemannian dilutions used by (and named for) homeopathy’s founder in that it used a single container for a series of dilutions rather than a new container for each.

Korsakov also used dilutions higher than those previously used (30C and higher). Dilutions made using his method are commonly designated with the letter “K”, e.g. 15K.

While working in the statistics department of the Police Ministry, Korsakov became intrigued with the possibility of using machinery to “enhance natural intelligence”. To this end, he devised several devices which he called “machines for the comparison of ideas”. These included the “linear homeoscope with movable parts”, the “linear homeoscope without movable parts”, the “flat homeoscope”, the “ideoscope”, and the “simple comparator”.

The purpose of the devices was primarily to facilitate the search for information, stored in the form of punched cards or similar media (for example, wooden boards with perforations). Korsakov announced his new method in September 1832, and rather than seeking patents offered the machines for public use.

The punch card had been introduced in 1805, but until that time had been used solely in the textile industry to control looms. Korsakov was reputedly the first to use the cards for information storage.

Korsakov presented his ideas to the Imperial Academy of Sciences in St. Petersburg, but their experts rejected his application, failing to see the potential of mechanizing searches through large stores of information. His machines were largely forgotten until after the Second World War, when a revival of historical interest resulted in the publication (in 1961) of several documents from the Academy’s archives relating to Korsakov’s machines and the uncovering of a book about them written by Korsakov himself.

Korsakoff’s syndrome (Korsakoff’s psychosis, amnesic-confabulatory syndrome; sometimes incorrectly spelled “Korsakov’s Syndrome”), is a brain disorder caused by the lack of thiamine (vitamin B1) in the brain. The syndrome is named after Sergei Korsakoff, the neuropsychiatrist who popularized the theory.