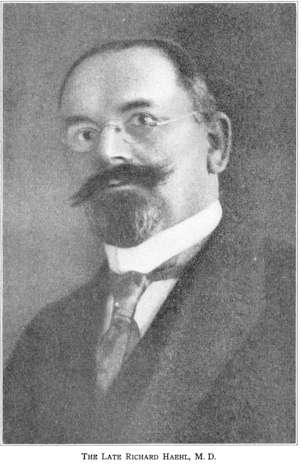 Richard M Haehl 1873 - 1932 MD, a German orthodox physician from Stuttgart and Kirchheim who converted to homeopathy, travelled to America to study homeopathy at the Hahnemann College of Philadelphia, to become the biographer of Samuel Hahnemann, and the Secretary of the German Homeopathic Society, the Hahnemannia.

Richard Haehl was also an editor and publisher of the homeopathic journal Allgemcine, and other homeopathic publications.

Haehl was responsible for saving many of the valuable artifacts of Samuel Hahnemann and retrieving the 6th edition of the Organon and publishing it in 1921.

Haehl was the founder of Hahnemann Museum, in Stuttgart, based at his home. 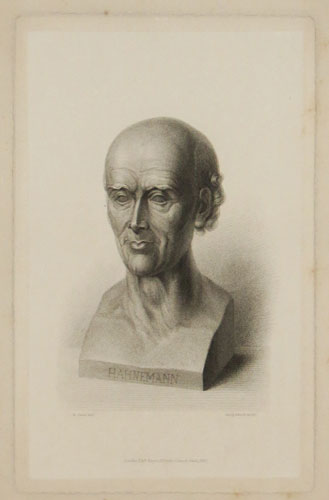 German homeopath Dr Richard Haehl, who spent many years collecting anything of Samuel Hahnemann’s he could find. From 1921 to 1931 he exhibited the items he had accumulated in his house.

Judging by Haehl’s Visitors’ Book from the time, this seems to have become something of a place of pilgrimage for homeopaths from around the world. After Haehl’s death the collection, now owned by the industrialist and philanthropist Robert Bosch, was housed in the homeopathic hospital in Stuttgart.

Tragically, despite being moved for safe keeping during the Second World War, some of the larger objects were destroyed in a bombing raid in 1942. Thankfully the written material was being stored elsewhere – in a salt mine – and so was saved from bomb damage…

The  Boenninghausen family had been owners of this “treasure”- the 6th edition of _Organon_ since Melanie Hahnemann’s death in 1878. Twice this manuscript of Samuel Hahnemann’s was in danger of being lost, once during the siege of Paris in the Franco-Prussian War of 1870-71 and once during the military over-running of Westphalia during World War I of 1914-18.

Samuel Hahnemann’s biographer Richard Haehl, with the financial support of the American homeopaths William Boericke and James William Ward, to buy Samuel Hahnemann’s bequest (including the _Organon_ manuscript) from the Boenninghausen family and published it in  1921.

But through a quirk of history Samuel Hahnemann’s last edition of 1842 was unseen until 1921 when it was brought to light by Richard Haehl, “translated” into English by William Boericke, and published finally by Boericke and Tafel.

The veil of secrecy that shrouded these so called médicaments au globule or 50 millesimal potencies was first partly lifted in 1921 by the Stuttgart homoeopath and Hahnemann biographer Rich ard Haehl when he published the last hand edition of the Organon.

A year previously he had managed, with the financial support of the American homoeopaths William Boericke and James William Ward, to buy Samuel Hahnemann’s bequest (including the _Organon_ manuscript) from the Boenninghausen family who had been owners of this “treasure” since Melanie Hahnemann’s death in 1878.

In return for their generous financial help Haehl gave his American benefactors the original manuscript of the 6th edition of the _Organon_ while he held on to a copy which Melanie Hahnemann had had drawn up already in 1865. The copy might also be one which Melanie Hahnemann’s adopted daughter Sophie, the wife of one of Boenninghausen’s sons, had commissioned in 1879.

Haehl used one of the two copies for his edition of the 6th edition published by Willmar Schwabe in 1921. Both copies have been considered lost ever since. They are not with Haehl’s collection which the German industrialist Robert Bosch had bought off him still during his lifetime.

The original which William Boericke used as the basis for his American translation of the _Organon_ eventually found its way into the library of the University of California in 1971 and is still there today.

Josef M Schmidt’s text critical 1992 publication of the _Organon_’s 6th edition is based on this still existent original manuscript which shows only few gaps in comparison to one of the copies that were available to Haehl for his edition.

Neither William Boericke in the preface to his translation, nor Haehl in the introduction to his edition refer to the significance of the new potentisation method described in § 270 of the 6th edition for Samuel Hahnemann’s therapeutic practice in the last years of his life and for homoeopathic pharmacotherapy in general.

Only in his very comprehensive Samuel Hahnemann biography Haehl remarks: “Samuel Hahnemann called remedy potencies that were produced in this new way Médicaments au globule as opposed to the Médicaments à la goutte which were produced using an earlier system and whose potency grades he used to express in Roman numerals. For the new remedy preparations on globules he used Arabic numerals with a little ring above (1,2,3,5 etc.)”

Haehl also mentions that according to Samuel Hahnemann’s then still existing medicine chest, these remedies were produced in ten different potencies. Which potentisation Samuel Hahnemann preferred, when and in which cases he resorted to the controversial Q-potencies  and how often he actually used them Haehl was unable to disclose.

Haehl’s premature death prevented him from publishing Samuel Hahnemann’s case journals, which had not been published before and had originally not been intended for publication at all…

Around 1924, Pierre Schmidt, visited Richard Haehl and had a look at Samuel Hahnemann’s Paris journals which he found very impressive but he did not have the time to study them in detail…

Richard Haehl was interested in massage and in 1898 from the Homeopathic Medical College of Philadelphia, he wrote Massage: Its History, Techniques and Therapeutic Uses, and his major work was the Biography of Samuel Hahnemann in two Volumes, and he also contributed cases and articles to various homeopathic publications.