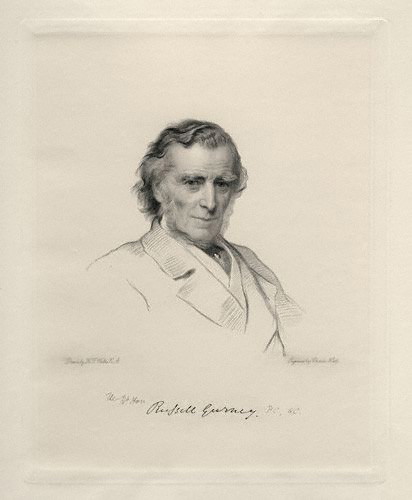 Russell Gurney 1804 - 1878 Barrister, and Recorder of the City of London (1861 - 71), MP for Southampton and a Member of the Privy Council, and a supporter of Women’s Suffrage Movement.

Russell Gurney was a patient of John Moorhead Byres Moir, and his wife was a sponsor of homeopathy.

From http://www.milesbarton.com/work.htm?ID=97 Russell Gurney was the son of Sir John Gurney (1768-1845), Baron of the Exchequer, and Maria Hawes (1768-1849), daughter of Dr William Hawes of London. Born in September 1804 in Norwood, Surrey he attended Dunham School, Norfolk and Trinity College, Cambridge, being called to the Bar at the Inner Temple in 1828.

In 1845 he was made a Queen’s Counsel and appointed Recorder of London in 1856, a public post that does not exclude the holder from parliament and therefore enabled Gurney to become M.P. for Southampton and later a Privy Councillor.

In 1871 he was chosen by Government to settle the legal details of the Treaty of Washington. Admired in America for his tact and diplomacy at this time, the New York Times noted in its obituary that “Mr Gurney was a keen politician, a fluent speaker, and, at the time of his death, one of the highest legal authorities in Great Britain”.

He married in September 1852 Emelia Batten and lived for the most part in London at Kensington Palace Gardens. He died in May 1878…  Gurney was painted in later life by eminent Victorian painters Henry Tanworth Wells and George Frederic Watts, both now in the Tate Gallery, London…

http://en.wikipedia.org/wiki/London_School_of_Medicine_for_Women** The London School of Medicine for Women** was established in 1874 and was the first medical school in Britain to train women.

The school was formed by an association of pioneering women physicians Sophia Jex Blake, Elizabeth Garrett Anderson, Emily Blackwell and Elizabeth Blackwell with Thomas Henry Huxley. The founding was motivated at least in part by Sophia Jex Blake’s frustrated attempts at getting a medical degree at a time when women were not admitted to British medical schools.

The 1876 Medical Act was introduced into the British Parliament by an MP named Russell Gurney, and received Royal Assent the same year. The bill extended the 1853 Medical Act to allow all examining authorities to grant registration to physicians regardless of gender.

Henry Edmund Gurney and many other Gurney family members were also ardent supporters of homeopathy,