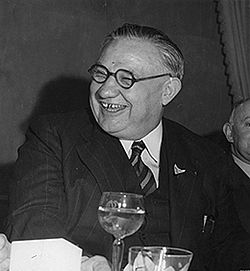 Ernest Bevin PC 1881 – 1951 was a British Labour leader, politician, and statesman best known for his time as Minister of Labour in the war time coalition government, and as Foreign Secretary in the post war Labour government.

From http://en.wikipedia.org/wiki/Ernest_Bevin Ernest Bevin was born in the small village of Winsford in Somerset, England to Diana Bevin who, since 1877, had described herself as a widow. His father is unknown. After his mother’s death in 1889 the young Bevin lived with his half sister’s family, moving to Morchard Bishop in Devon.