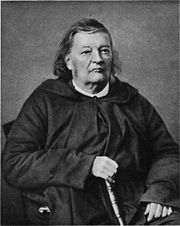 Justinus Kerner treated the Seeress of Provost with *homeopathic remedies.

Justinus Kerner was born at Ludwigsburg in Württemberg. After attending the classical schools of Ludwigsburg and Maulbronn, he was apprenticed in a cloth factory, but, in 1804, owing to the good services of Professor Karl Philipp Conz, was able to enter the University of Tübingen.

He studied medicine but also had time for literary pursuits in the company of Ludwig Uhland, Gustav Schwab and others. He took his doctor’s degree in 1808, spent some time travelling, and then settled as a practising physician in Wildbad.

Here he completed his Reiseschatten von dem Schattenspieler Luchs (1811), in which his own experiences are described with caustic humour. He next collaborated with Ludwig Uhland and Gustav Schwab in the Poetischer Almanach for 1812, which was followed by the Deutscher Dichterwald (1813), and in these some of Kerner’s best poems were published.

In 1815 he obtained the official appointment of district medical officer (Oberamtsarzt) in Gaildorf, and in 1818 was transferred to Weinsberg, where he spent the rest of his life.

His house, the site of which at the foot of the historical Schloss Weibertreu was presented to him by the townspeople, became a mecca for literary pilgrims, all of whom were made welcome. Gustav IV Adolf of Sweden came with a knapsack on his back. The poets, Christian Friedrich Alexander von Württemberg and Nikolaus Lenau were constant guests, and in 1826 Friederike Hauffe, the daughter of a forester in Prevorst, a somnambulist and clairvoyante, arrived; she forms the subject of Kerner’s famous work Die Seherin von Prevorst, Eröffnungen über das innere Leben des Menschen und über das Hineinragen einer Geisterwelt in die unsere (1829; 6th ed., 1892).

In 1826 he published a collection of Gedichte which were later supplemented by Der letzte Blütenstrauß (1852) and Winterblüten (1859). Among others of his well known poems are the charming ballad Der reichste Fürst; a drinking song, Wohlauf, noch getrunken, and the pensive Wanderer in der Sägemühle.

In 1851 he was compelled, owing to increasing blindness, to retire from his medical practice, but he lived, carefully tended by his daughters, at Weinsberg until his death.

He was buried beside his wife, who had died in 1854, in the graveyard of Weinsberg, and the grave is marked by a stone slab with an inscription he himself had chosen: Friederike Kerner und ihr Justinus. In Bilderbuch aus meiner Knabenzeit, Kerner recalls George Rapp’s visits to his father, the Oberamtmann at Maulbronn.

In 1829, Kerner published Die Seherin von Prevorst [The Seeress of Prevorst], about Kerner’s relationship with a young woman named Friederike Hauffe (1801-1829) who was reputed to have visionary and healing powers, and who had produced a strange ‘inner’ language, containing Hebrew like elements. This book made quite an impression among the members of the Harmony Society in 1829, who saw it as confirmation of the approaching millennium and of their religious views.

Homeopath Clare Goodrick Clarke has written The Seeress of Prévorst: A Homeopathic Study of Justinus Kerner’s Patient, published in 2005.

Catharine Crowe also translated Justinus Andreas Christian Kerner’s book about Frederica Hauffe, “the Seeress of Prevorst,” and it was published in English in 1845 under the title The Seeress of Prevorst; or, Openings-up into the Inner Life of Man, and Mergings of a Spirit World into the World of Matter.