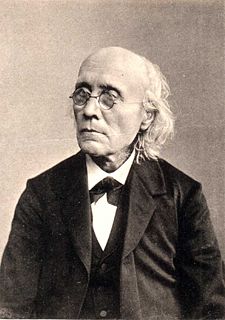 Fechner was also a friend of Felix Mendelssohn.

Fechner studied spiritualism, and he was present at a seance when supposedly, Constantine Hering and Lucretia Coffin Mott influenced the medium via automatic writing. Homeopathic remedies (arsenicum, bryonia and pulsatilla) were used at the seance to ‘unblock the channels’:

Perhaps no other investigation of Spiritistic phenomena has exercised so strong an influence upon the public mind in America, at least, as that conducted by Professor J.C.F. Zoellner and his colleagues in Leipsic in 1877 and 1878.

In November and December of the year 1877 and in May of 1878, Professor Zoellner had a number of seances with Henry Slade, the American Medium, in Leipsic, the results of which he has narrated in his “Scientific Treatises,” and which he finds of special interest in connection with certain physical speculations with which he was before this time occupied.

He declares himself specially authorized to mention by name as present at some of his investigations his colleagues, Professors Fechner and Scheibner, of the University of Leipsic, and Professor Weber of Goettingen. These three, he states, were perfectly convinced of the reality of the observed facts, and that they were not to be attributed to imposture or prestidigitation. He also mentions the presence of Professor Wundt at at least one of the sittings. (NB: Helena Petrovna Blavatsky and Henry Steel Olcott nominated Henry Slade for this study).

An early pioneer in experimental psychology and founder of psychophysics, Gustav Theodor Fechner inspired many 20th century scientists and philosophers. He is also credited with demonstrating the non-linear relationship between psychological sensation and the physical intensity of a stimulus via the formula: ”S = K__L__o__g__I“.

He was born at Groß-Särchen, near Muskau, in Lower Lusatia, where his father was pastor. He was educated at Sorau and Dresden and at the University of Leipzig, the city in which he spent the rest of his life.

In 1834 he was appointed professor of physics, but in 1839 contracted an eye disorder while studying the phenomena of color and vision, and, after much suffering, resigned. Subsequently recovering, he turned to the study of the mind and its relations with the body, giving public lectures on the subjects dealt with in his books.

Gustav Fechner published chemical and physical papers, and translated chemical works by J. B. Biot and Louis Jacques Thénard from the French language. A different but essential side of his character is seen in his poems and humorous pieces, such as the Vergleichende Anatomie der Engel (1825), written under the pseudonym of “Dr. Mises.”

Fechner’s epoch making work was his Elemente der Psychophysik (1860). He starts from the monistic thought that bodily facts and conscious facts, though not reducible one to the other, are different sides of one reality.

His originality lies in trying to discover an exact mathematical relation between them. The most famous outcome of his inquiries is the law known as the Weber–Fechner law which may be expressed as follows:

Fechner’s general formula for getting at the number of units in any sensation is S = c log R, where S stands for the sensation, R for the stimulus numerically estimated, and c for a constant that must be separately determined by experiment in each particular order of sensibility.

Fechner’s reasoning has been criticized on the grounds that although stimuli are composite, sensations are not. “Every sensation,” says William James, “presents itself as an indivisible unit; and it is quite impossible to read any clear meaning into the notion that they are masses of units combined.”

He also studied the still mysterious perceptual illusion of Fechner color, whereby colors are seen in a moving pattern of black and white.

Fechner introduced the median into the formal analysis of data. Fechner, along with Wilhelm Wundt and Hermann Helmholtz is recognized as one of the founders of modern, experimental psychology. His clearest contribution was the demonstration that because the mind was susceptible to measurement and mathematical treatment, psychology had the potential to become a quantified science. Theorists such as Immanuel Kant had long stated that this was impossible, and that therefore, a science of psychology was also impossible.

Though he had a vast influence on psychophysics, the disciples of his general philosophy were few. Among them, however, was William James, who, in 1904, wrote an admiring introduction to the English translation of Fechner’s Büchlein vom Leben nach dem Tode (Little Book of Life After Death).

Fechner’s world concept was highly animistic. He felt the thrill of life everywhere, in plants, earth, stars, the total universe. Man stands midway between the souls of plants and the souls of stars, who are angels. God, the soul of the universe, must be conceived as having an existence analogous to men. Natural laws are just the modes of the unfolding of God’s perfection.

In his last work Fechner, aged but full of hope, contrasts this joyous “daylight view” of the world with the dead, dreary “night view” of materialism. Fechner’s work in aesthetics is also important. He conducted experiments to show that certain abstract forms and proportions are naturally pleasing to our senses, and gave some new illustrations of the working of aesthetic association.

Fechner’s position in reference to predecessors and contemporaries is not very sharply defined. He was remotely a disciple of Schelling, learnt much from Benedict de Spinoza, Gottfried Wilhelm Leibniz, Johann Friedrich Herbart, Arthur Schopenhauer, and Christian Hermann Weisse, and decidedly rejected Georg Hegel and the monadism of Rudolf Hermann Lotze.