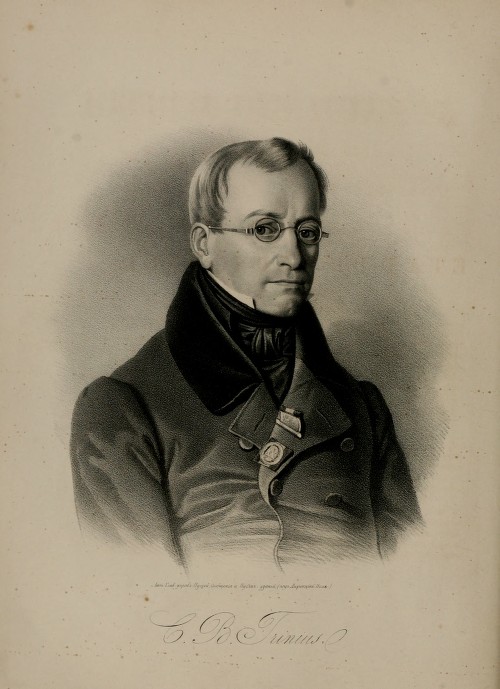 Trinius founded the Botanical Museum in St. Petersburg and was a physician and teacher of Tsar Alexander II and Tsar Nicholas I.

Bernhard Trinuis was the nephew of Samuel Hahnemann, and he was an orthodox physician who converted to homeopathy.

I am indebted to Gilbert von Studnitz, great great grandson of Michael von Bulmerincq for the *following information from his family archives: 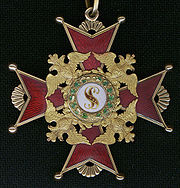 Order of St. Stanislaus, as well as the II Class of the

Trinius was born on 7 März 1778 in Eisleben. He was the son of evangelical pastor Trinius Johann Anton (1772-1784) and Charlotte Hahnemann (1752-1812), a sister of the famous founder of homeopathy, Samuel Hahnemann.

His father died young, and so his mother married the teacher Dr. Müller from Eisleben. After graduating from high school in Eisleben, Trinius studied medicine between 1792-1802, first in Jena, then in Halle, where he continued his interest in botany, and then in Leipzig. He received his doctorate in 1802.

After graduating Trinius moved into the German Russian Baltic provinces, and then to Russia to work, and in Dorpat he received an immediate place on the farm in Gawen Kurland. Soon after he apparently moved into the city Hasenpoth in Latvia, where he met the poet Ulrich von Schlippenbach (1774-1826) and the writer Mirbach.

In 1808, Trinius had his practice in Hasenpoth and had became the personal physician to Antoinette, Duchess of Württemberg. Until the death of the Duchess in 1824, he took many tripsthroughout Germany and Russia and he met many famous and outstanding people. Trinius accompanied the duchess between 1811-1815 to St. Petersburg, where he was friends with Ernst Moritz Arndt. Between 1816-1822 Trinius lived in Wizebsk (Belarus).

In 1822 Trinius returned to St. Petersburg, and became a full member of the Imperial Academy of Sciences. When the Duchess died in 1824, he was appointed as the imperial physician.  Trinius now settled in St. Petersburg, and between 1829-1833, Trinius instructed Tsar Alexander II in the natural sciences.

In 1830, Trinius devoted his medical practice to the study of homeopathy He corresponded with his uncle, Samuel Hahnemann, and from 1836, he travelled abroad frequently on behalf of the Imperial Academy of the botanical collections.

Trinius wrote 34 botanical treatises, and published many botanical manuscripts. Shortly before his death bequeathed his Herbarium of Carl Bernhard von Trinius, a botanical collection of plants from 4000 to 5000 documents that are still of fundamental scientific importance, and housed in the Botanical Museum of St. Petersburg.

These include many notes and detailed drawings, which were prepared by Trinius. In 1994, in a joint project between the Komarov Botanical Institute and the Smithsonian Institute (USA), was begun to create a digital catalog. In 1995, the Trinius collection was published on microfiche.

Bernhard Trinius wrote a few poems, which were published in magazines and pocket books, amnd after his death, two of his friends created a collection of his poems. The botanist Georg Franz Hoffmann named in honor of Trinius the plant genus fiber umbrella of the Umbelliferae family as Trinia.

Carl Bernhard Trinius is sometimes listed as “von Trinius”…strictly speaking this is incorrect, as Trinius received hereditary Russian nobility, which does not convey use of the “von”, as German nobility generally does.