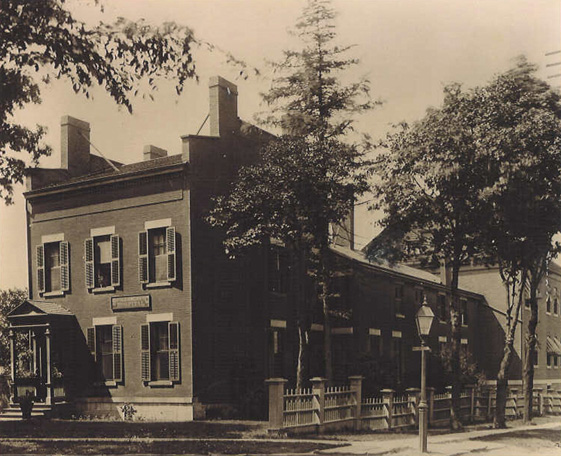 Gilbert Dewitt Wilcox 1858 - 1929? was an American Homeopath,who the Cleveland Homeopathic Hospital College, and became  President of the American Institute of Homeopathy.

Gilbert Dewitt Wilcox was born in Akron, Ohio, January 15, 1858. His father, David G. Wilcox, was a descendant of John Wilcox, one of the original proprietors of Hartford, Connecticut, who emigrated to this country from England with the Rev. Thomas Hooker’s company in 1645.

Dr. Wilcox received his early education in the schools of his native town, and later attended Akron High School, from which he was graduated when eighteen years of age, and immediately entered Buchtel College for an elective course of study that should best prepare him for his chosen profession.

He began his studies in the office of Dr. William Murdoch of Akron, soon afterward, however, going to Cleveland, where he studied under the instruction of the well known surgeon, Dr. Nathaniel Schneider.

He graduated from the Cleveland Homeopathic Hospital College in 1880, and returned to Akron, where he practiced two years.

He then went to London, England, to take special instruction in surgery and surgical pathology. The last six months of his stay in Europe were spent in the London Temperance Hospital, where he received the appointment of Resident House Surgeon.

In 1887 Dr. Wilcox located in Buffalo, New York, where he began his professional career, building up a surgical practice quite rapidly. He was appointed Surgeon to the Buffalo Homeopathic Hospital, and two years later opened a private hospital, which was the first of its kind in Buffalo and is still continued as his private surgical hospital.

When the Erie County Hospital was established, Dr. Wilcox was one of its original staff members, being appointed Visiting Surgeon. He performed his first ovariotomy when twenty eight years of age. He was among the first of American surgeons to perform nephrorrhaphy.

After fifteen years of general medical practice and surgery, he has recently relinquished the former in order to devote himself unreservedly to surgery and gynecology; and he has made many valuable contributions to medical literature.

He is a member of several homeopathic societies, among them the State Medical Society, of which he was Secretary five years and now is President.

Gilbert Dewitt Wilcox practiced in Buffalo alongside F B Groesbeck, where he was the owner of a private hospital known as the Lexington Heights Hospital, established in 1890.

”The American Medical Association is fast degenerating into a political machine bent on throttling everything which stands in its way for obtaining medical supremacy. They propose to own and control every medical college in this country, all the State, municipal and university hospitals, and licensing boards in the United States.” Gilbert Dewitt Wilcox, President of the Institute of Homeopathy, 1914

“The American Medical Association is fast degenerating into a political machine bent on throttling everything which stands in its way for obtaining medical supremacy. It has made an unholy alliance with the Army and Navy Medical Departments, and together they propose to own and control every medical college in this country, all the State, municipal and university hospitals, and get within their grasp all the examining and licensing boards in the United States.” Editorial, Medical Organizations in Annual Session: The AMA Meeting, Journal of American Osteopathic Association 13 (1914): 650.