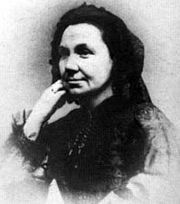 Jenny Poinsard d’Hericourt 1809 - 1875 was a French feminist activist, writer, and a physician midwife. d’Hericourt studied homeopathic medicine in Paris in 1848, finally receiving her certificate in 1859.

d’Hericourt went on to become one of the leading feminists of her time, achieving Worldwide acclaim.

d’Hericourt was a friend of Elizabeth Cady Stanton, Susan Brownell Anthony and many others.

According to an article by Simon Felix Camille Croserio in Critique de Manuel Homeopathique, d’Hericourt became politicised when Michel Gabriel Joseph, her husband, tried to murder her so that he could marry someone else.

Divorce was illegal in France at this time. d’Hericourt campaigined for divorce to be made legal and against capital punishment, and she studied physiology and homeopathy with the visiting President of the Medical Homeopathic Institute of Buenos Aries.

d’Hericourt objected to new borns being immunised using blood from infected persons, preferring instead to inoculate the mother’s post partum, and then the infant several month’s latr using their mother’s blood.

From 1855, d’Hericourt began publishing feminist articles in the liberal Italian Journal La Ragione, edited by Cristoforo Bonavino under the psuedonym Ausonio Franchi. d’Hericourt argued with Pierre Joseph Proudhon about his misogynist views, and in 1864, d’Hericourt published A Woman’s Philosophy of Women, countering the belief that women were inferior to men across the board.

Shortly thereafter, d’Hericourt moved to Chicago to work with Elizabeth Cady Stanton and Susan Brownell Anthony and many others, contributing to The Agitator, and extending her influence Worldwide. d’Hericourt returned to France 10 years later.

writer and women’s rights activist, was born as Jeanne Marie Fabienne Poinsard, in Besançon. Her family background and early upbringing was Protestant, Montbéliard Lutheran on her father’s side and Swiss Calvinist on her mother’s side.

Before the recent retrieval of Jenny P. d’Hericourt’s brief autobiography, she was one of the least well known of the women active in the 1848 revolution. We now know that prior to that time she had run a private girls’ school in Paris, had married and then separated from a husband named Gabriel Marie (divorce being impossible under French law at that time), and had become an enthusiastic adherent of the ideas of Etienne Cabet.

She had also published a novel, Le Fils du reprouve (1844), under the pen name of Felix Lamb. By her own account, Jenny P. d’Hericourt had a lifelong sympathy for victims and oppressed creatures.

In early 1848 Jenny d’Hericourt organized thirty women into a society to work for women’s civil liberties; the manifesto of this Société pour l’émancipation des femmes (dated 16 March), signed by V. Longueville as president, and J. P. d’Hericourt, as secretary, has been recovered in the National Archives.

Hericourt also organized evening schools for workers of both sexes and worked to influence the elections. In particular she took credit for forcing consideration of the issue of women’s equality in Etienne Cabet’s Société fraternelle centrale, and for having successfully smuggled Auguste Blanqui through Paris, following his indictment by the high court in May. These latter activities remain as yet unconfirmed by archival evidence.

Whether she is the same person as the “Jeanne Marie” who played an active role in the Voix des femmes group remains open to question. Hericourt’s enthusiasm for the Icarians was greatly stimulated by Etienne Cabet’s endorsement of women as medical doctors.

Although the faculties were then closed to women, Hericourt managed to study homeopathic medicine in Paris, and following the election of Louis Napoleon as President, completed her studies with a stage in a hospital for practical obstetrics. She acknowledged receiving a diploma as a maitresse sage femme, which Anteghini has since located under the Poinsard name in the 1859 records of the Paris Faculty of Medicine.

All these experiences, followed by a major polemic with Proudhon in the mid 1850s and her analysis of the various schools of thought on social and political change with respect to the position of women, culminated in the publication in 1860 of Hericourt’s landmark study, La Femme affranchie: réponse MM. Michelet, Proudhon, E. de Girardin, A. Comte et aux autres novateurs modernes (Brussels: Van Meenen et Cie, and Paris: A. Bohn).

A Dr. Hericourt experimented with innoculations, attempting to immunise people with avian tuberculosis in 1910.

Charles Rochet d’Hericourt was a dealer in Kousso, indeed he was the sole supplier in Paris in 1851.