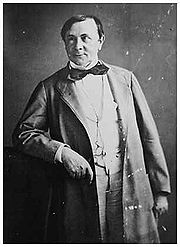 Emile de Girardin 1802 - 1881 was a French journalist, publicist, and politician.

Emile de Girardin and his wife *Delphine were advocates of homeopathy.

Emile de Girardin was born in Paris in 1802, the son of General Alexandre de Girardin and of Madame Dupuy, wife of a Parisian advocate.

His first publication was a novel, Émile, dealing with his birth and early life, and appeared under the name of Girardin in 1827. He became inspector of fine arts under the Martignac ministry just before the revolution of 1830, and was an energetic and passionate journalist.

Besides his work on the daily press he issued miscellaneous publications which attained an enormous circulation. His Journal des connaissances utiles had 120,000 subscribers, and the initial edition of his Almanach de France (1834) ran to a million copies.

In 1836 he inaugurated penny press journalism in a popular Conservative organ, La Presse, the subscription to which was only forty francs a year. This undertaking involved him in a duel with Armand Carrel, the fatal result of which made him refuse satisfaction to later opponents.

In 1839 he was excluded from the Chamber of Deputies, to which he had been elected four times, on the plea of his foreign birth, but was admitted in 1842. He resigned early in February 1847, and on February 24, 1848 sent a note to Louis Philippe demanding his resignation and the regency of the duchess of Orléans.

In the Legislative Assembly he voted with the Mountain. He pressed eagerly in his paper for the election of Louis Napoleon, of whom he afterwards became one of the most violent opponents.

In 1856 he sold La Presse, only to resume it in 1862, but its vogue was over, and Girardin started a new journal, La Liberté, the sale of which was forbidden in the public streets. He supported Olivier Emile Ollivier and the Liberal Empire, but plunged into vehement journalism again to advocate war against Prussia.

Of his many subsequent enterprises the most successful was the purchase of Le Petit Journal, which served to advocate the policy of Thiers, though he himself did not contribute. The crisis of the 16th of May 1877, when Jules Simon fell from power, made him resume his pen to attack MacMahon and the party of reaction in La France and in Le Petit Journal.

Émile de Girardin married in 1831 Delphine Gay, and after her death in 1855 Guillemette Josephine Brunold, Countess von Tieffenbach, widow of Prince Frederick of Nassau. He was divorced from his second wife in 1872.

August Girardin was a French orthodox physician who studied the Russian Cholera epidemic in 1832. 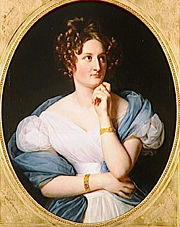 She was born at Aachen, and christened Delphine Gay. Her mother, the well known Madame Sophie Gay, brought her up in the midst of a brilliant literary society.

She published two volumes of miscellanea, Essais poetiques (1824) and Nouveaux Essais poétiques (1825). A visit to Italy in 1827, during which she was enthusiastically welcomed by the literati of Rome and even crowned in the capitol, produced various poems, of which the most ambitious was Napoline (1833).

Delphine’s marriage in 1831 to Émile de Girardin opened up a new literary career. The contemporary sketches which she contributed from 1836 to 1839 to the La Presse, under the nom de plume of Charles de Launay, were collected under the title of Lettres parisiennes (1843), and obtained a brilliant success. __

Madame Marquise de Girardin was a sponsor of the Hahnemann Hospital in Paris in 1870.