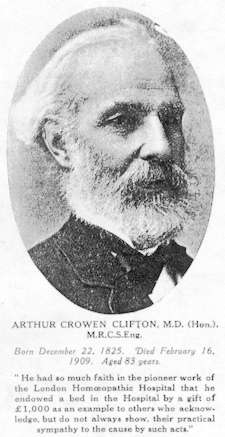 Arthur Crowen Clifton 1825 - 1909 M.D. (Hon.), New York, M.R.C.S. England was an orthodox physician and surgeon who converted to homeopathy, Physician at the London Homeopathic Hospital. Arthur Clifton was a member of The British Homeopathic Society, and a member of the Royal College of Surgeons.

For 40 years, Arthur Clifton was an advocate of homeopathy through many storms.

http://www.homeoint.org/photo/c3/cliftonac.htm He had so much faith in the pionner work of the London Homeopathic Hospital that he endowed a bed in the Hospital by a gift of £ 1,000 as an example to others who acknowledge, but do not always show, their practical sympathy to the cause by such acts.

Arthur Clifton was a cousin of mine and lived in Northampton. He was the homeopathic doctor, and used to come in and see “Aunt Kate” (Grannie) and she being Allopath they used to have great discussions on medicine. However, A. Clifton made his mark, went on a trip to America representing the Homeopathic doctors of England, and was conferred the title of Doctor, he held the M.R.C.S.E. degree and was not an M.D. so Grannie had another pull at him. However he was good to me ae a youngster and I used to go into the country with him when he went to see patients - so saw a lot of the country. He had a good library that I had free run of - so with his library and John Brown’s I was well supplied with books. Mrs. Clifton too was a wonderful woman and good to me, she and Mrs. Brown being alike.

Arthur Clifton’s Obituary is in the Transactions of the … Session of the American Institute of Homœopathy, The Pacific Coast Journal of Homœopathy,

Arthur C Clifton was a homeopathic Chemist who practiced alongside James Epps.

E Clifton was also a homeopath in Ipswich in 1878.

Frederick William Clifton MRCS Edin., LRCP, LM was also a homeopath who practiced in Sheffield and Derby in 1909.

George Clifton also a homeopath, Physician at the Leicester Homeopathic Dispensary in 1872,